‘Next to Normal’ opens for cheering audience 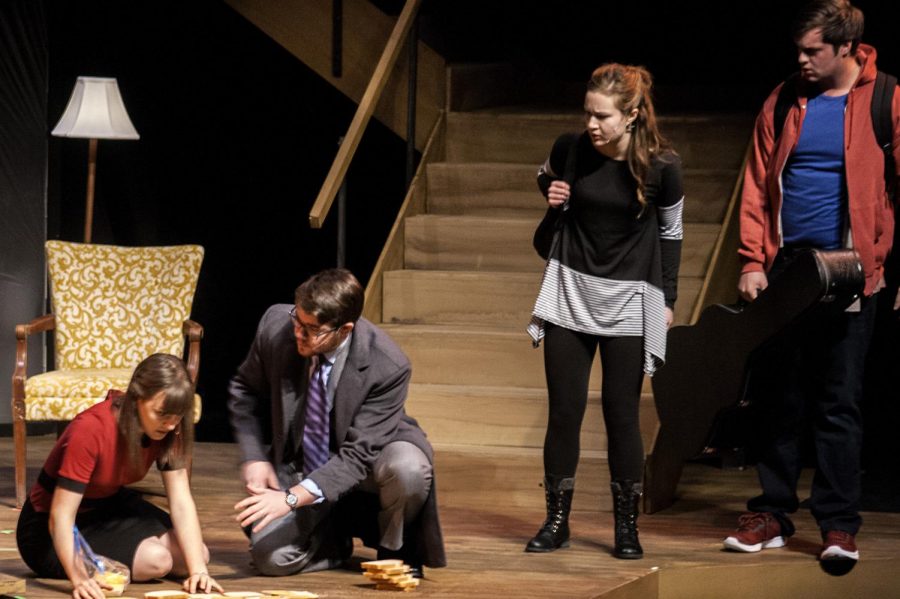 “Next to Normal” cast members received much praise after their opening performance Wednesday night, with many members of the audience giving them a standing ovation.

The theatre arts department chose “Next to Normal” as its fall production, and will be showing it until Sunday.

“Next to Normal” tells the story of a woman, Diana Goodman, who has bipolar disorder and her family’s journey in learning to cope with her condition. The musical features many twists and turns to keep the audience on the edge of their seat.

Liz Phillips, a senior who played Dr. Madden, Goodman’s psychiatrist, said working with the cast and production crew was a great experience for her.

“The first thing I had to do was research a lot of the medical terms involved in the show,” Phillips said.

Phillips said the cast got a chance to ask a researcher from Sarah-Bush Lincoln any questions they had concerning the content of the show.

“I had a lot of questions, especially about what feelings the people would normally be going through in this kind of situation,” Phillips said.

“Next to Normal” depicts a variety of heavy subjects, such as self-harm, mental disorders, attempted suicide and features some vulgar language. It also features a look at Goodman’s treatment for her disorders.

Phillips said she hopes cast members did a good job of depicting these topics and were able to send an impactful message to the audience.

“We’ve been working really hard, and we’ve put about 150 hours or more into the production,” Phillips said.

She added that they had a great opening night, and cannot wait to perform the rest of the shows.

“Working with such a small cast, there’s only about of nine of us, everyone grows really close, and it becomes almost like a family,” Phillips said.

Isabella Noll, a freshman early childhood education major, said she did musical theatre in high school and was excited to see how Eastern’s theatre department performed “Next to Normal.”

“I knew the musical dealt with a mom battling certain mental disorders, but other than that I didn’t know a whole lot,” Noll said.

Throughout the show, the genre of music helped the audience follow along and further understand the character’s disorder.

Noll said she was unable to state her favorite scene for fear of giving spoilers and revealing a major plot twist.

“All I’ll say is that the scene was very powerful,” Noll said.

She said she hopes audience members can start to understand more about mental disorders and learn how important patience can be when talking to those affected by them.

Jessie Wasserman, a junior psychology major, said she thought the show was amazing.

“I can’t think of (a favorite character) because they were all super great,” Wasserman said. “I think they displayed the characters very well. When dealing with depression, how they explained it and went about it was fantastic.”

After the performance, there was a table outside featuring pamphlets and professionals for audience members who wanted to discuss the issues addressed in the musical further.