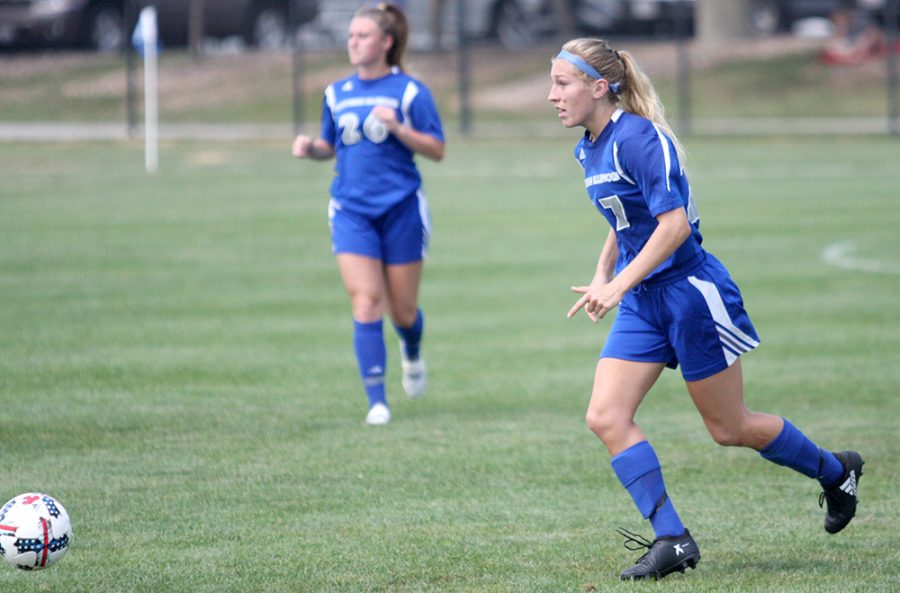 Eastern women’s soccer team sophomore Lindsey Carlson was named to the All-OVC Second Team Thursday as the OVC announced its season awards and All-OVC teams, but she said despite the honor, she wants to focus on the team as much as possible.

The center back for the women’s soccer team was an integral part of the defense throughout the season, helping lead the team to three shutouts this season.

“It feels like such an honor because I was in a way surprised, we didn’t have the best of conference seasons, so I know any award for anyone/ our team would be tough to acquire,” she said. “Although individual work does contribute to the team, this is an accomplishment that only makes me hungrier for team recognition.”

Once senior Carrie Caplin, who was a leader on defense, went down with a season-ending injury, Carlson took over as a leader for the defense.

“Obviously injuries are super unfortunate, but we still had the same season goals in mind so the mission was the same,” Carlson said. “I eventually got comfortable as center back. I just wanted to keep a solid back line every game.”

Carlson played as an outside back last year and for the first few games this year, but injuries put her into the center back spot. She had experience as a center back in club soccer and in high school, so she said she was more than willing to step up to help and be a voice in the back.

“As a center back we see the whole field so it’s important to have a loud voice and direct people and control plays and that’s something I not only needed to do but am still working on,” she said.

Carlson played in all 19 matches this season as a starting defender. She also logged the most minutes played of anyone on the team with 1,674. But despite the OVC honor and the individual stats she compiled this season, she stressed that she never goes for individual stats, and that she tries to do everything she can to make a positive impact in the game in every minute.

Carlson is the first Eastern player since Meagan Radloff in 2014 to earn either first or second team All-OVC honors. Last season, midfielder Henar Urteaga, a sophomore this year, was named to the OVC All-Newcomer Team.