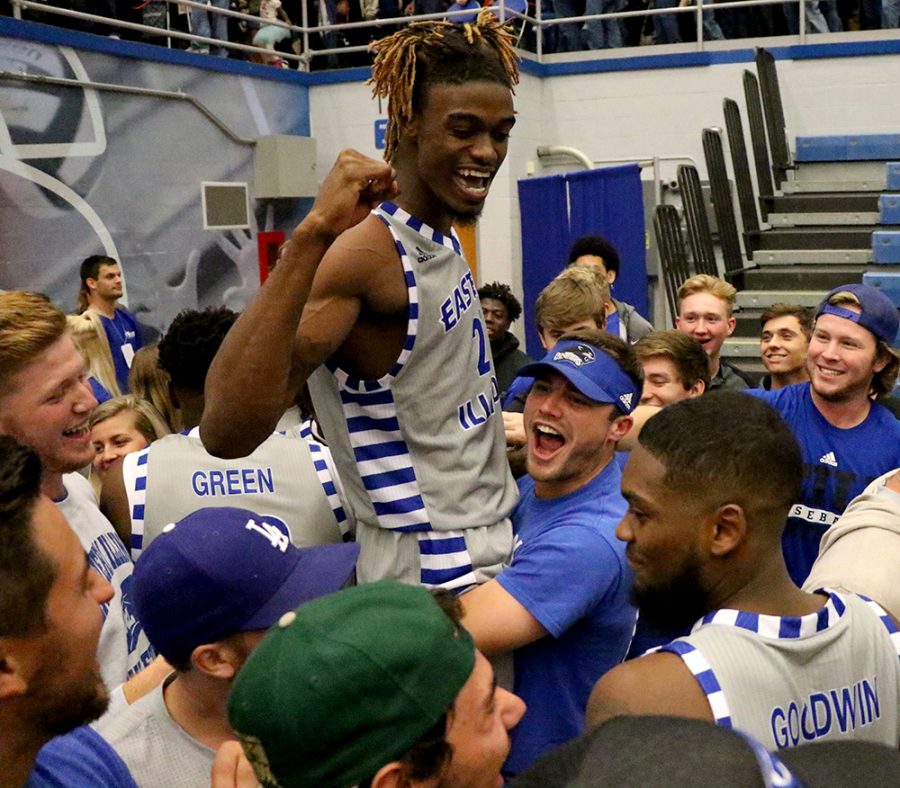 In just ten days, the Eastern men’s basketball team set up a game with the University of Illinois, sold out Lantz Arena and ended with the Panthers beating Big Ten Illinois 80-67.

“The game doesn’t happen unless (Illinois Director of Operations) Joey Biggs calls (Oct. 24) and says ‘here’s what we’d like to do and we’d like to come to your place,” Spoonhour said. “I about dropped the phone.”

It was the first time the University of Illinois played basketball in Lantz Arena and the initial hype of the game did not disappoint. From the start of the game Eastern fans were loud and progressively got louder.

From alley-oop slams from senior Muusa Dama and 3-pointers from seniors Terrell Lewis and Montell Goodwin, the packed house was into it.

One thing Spoonhour stressed was how grateful he was to Illinois having the idea to get the game set up on such short notice.

“It’s a tremendously generous thing to do,” Spoonhour said. “Nobody does what (Illinois coach) Brad Underwood did. This is a huge deal for us obviously. I don’t know how much it will be, it has to be quite a bit and I know there’s other games that raised more but if it just helps a couple of folks, it’s got to help a couple. I really want to praise the NCAA. It helps in every possible way.”

While both teams put on a show for Eastern and Illini fans alike, the reason for the game was to raise money for the people affected by the hurricanes.

“This speaks volume to what our country is about when we can come out and support something that goes to a terrific cause and for that I’m very thankful,” Underwood said. “We get the privilege to play a basketball and there’s a lot of people around this place in Puerto Rico, the United States (and) Houston still struggling.”

Underwood lived in Texas for three years and spent time in Houston and lived in Florida through three hurricanes, so the game meant a lot to him.

He said it is an incredible bad feeling going through one and the days after.

“To be able to help is pretty special,” he said.

Game-wise, the Panthers gave the Big Ten Illini a challenge. Eastern trailed by 11 points at the 6:05 mark of the first half, but came back and cut it within four points, 42-38 at the end of the first half.

For the Panthers, sellout crowds are not something they play in front of in Lantz Arena and the Illini had a lot to do with Friday’s sell out and that is what gave the Panthers motivation.

“The last thing I told (the team) before the game was, ‘fellas you better go out and play them tonight because they ain’t coming back next week,” Spoonhour said. That’s where it comes from. The guys know. We’ll play sometimes and not all the bleachers are pulled down.”

Once Eastern had a 77-62 lead with 3:22 left, Illini fans headed toward the exits to head back up north.

Eastern’s seniors Dama, Lewis, Goodwin and Ray Crossland were the key players for the Panthers in the win.

With them leading the way, Eastern was able to out-play the Illini in Underwood’s eyes.

“Biggest thing I’m most upset with, I take a lot of pride in our teams’ playing hard, we got totally out-played and out-hustled,” Underwood said. “We never got on the floor for a loose ball, we played ‘pretty.’”

The Panthers are still 0-0 and have another home exhibition game Monday in Lantz Arena.