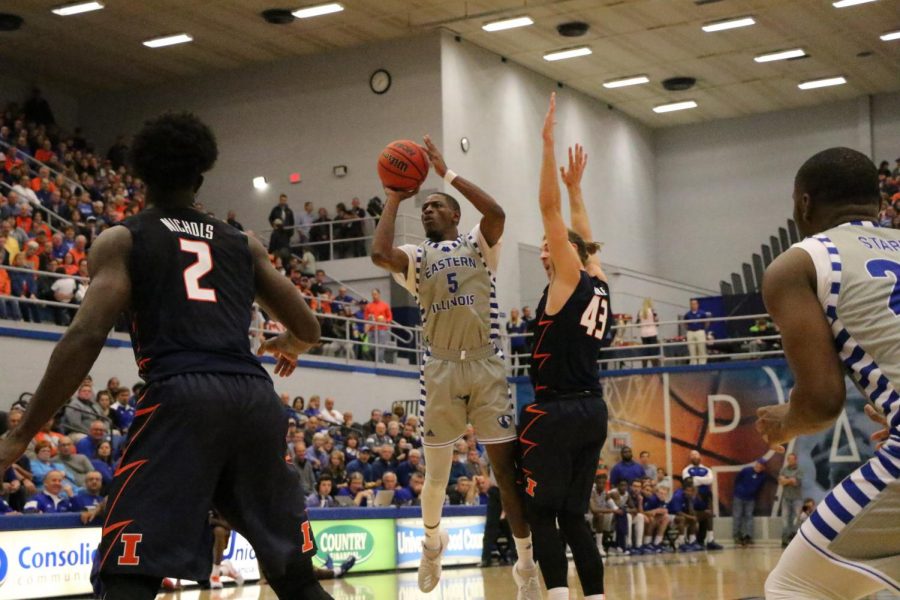 Senior Ray Crossland throws up a floater for the score in the Panthers' 80-67 win over the University of Illinois Friday in Lantz Arena.

It was just an exhibition game for the Eastern men’s basketball team and the University of Illinois, but the Panthers made a statement with an 80-67 win in a sold out Lantz Arena crowd Friday night.

The game was played for hurricane relief and Eastern and the Illini sold out Lantz Arena and from the very start of the game, Lantz was loud. And as the game winded down, it got louder.

Eastern out-scored the Illini 39-20 in the second half.

Coach Jay Spoonhour said the team’s biggest problem last year was not being able to get to the basket and get fouled to get to the line. Eastern shot 21 free throws and made 19 of them.

The Panthers also shot 56.8 percent from the field for the game, something they relied on a lot last year that did not work all the time, but came through for them tonight.

“We made jump shots,” Spoonhour said. “That’s the reason we made the run. The ball went in. Ours went in and theirs didn’t and that’s why we made the run off them. But you can’t live off of that.”

Senior leaders Muusa Dama and Montell Goodwin each scored 14 points for the Panthers and Goodwin was 3-4 from beyond the arc.

The game was just scheduled a week ago, but Eastern came out with an intensity you would expect in an OVC Tournament game. But Spoonhour and Goodwin contributed that to one thing.

“I think we just fed off the fans,” Goodwin said. “The fans gave us a lot of energy.”

“Montell being a senior, the game slows down for him a little bit, he sees the guy driving in and he stepped in on a couple of those passes,” Spoonhour said. “In the first half, those passes went through. There was not magical coaching there, that was a senior thing.”

This game, at the end of the day, does not count, but most importantly raised thousands of dollars for hurricane victims in the United States and Puerto Rico.

“This is a huge deal for us,” Spoonhour said. “I don’t know how much it will be, but it’s got to be quite a bit. I know there’s other games that have raised more, but gosh if it just helps a couple folks.”

He said he does not always do it, but he wanted to praise the NCAA for coming up with the idea to have schools play for hurricane relief to raise money.