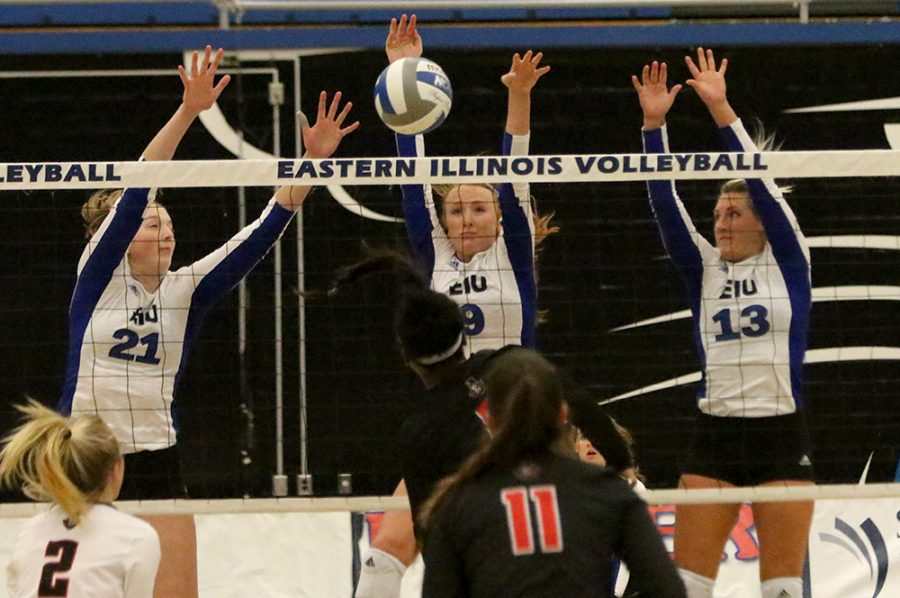 With a tight OVC race, a pair of losses last weekend for the Eastern volleyball team makes the race even tighter.

When the season started, it could not have been guessed that Eastern would have matchups with three of the top four teams in the OVC in a row near the end of the season, but that is the task it has been dealt.

Eastern has completely done a 180 after not coming close to making the tournament last year as it sits in the seventh spot—tournament eligible if the season ended today.

Unfortunately for Eastern, it does not end yet. The Panthers have a matchup with Southern Illinois Edwardsville Wednesday night on the road. The Cougars have the second-best record in the conference.

The Panthers are 6-6 with three matches remaining after Southern Illinois Edwardsville.

Eastern senior Maria Brown said the team recognizes the importance of this match, especially being where they are at in the season.

“We really stressed focusing on execution during practice,” she said. “This is a crucial time in the season to save the best ranking in the conference we can for ourselves.”

The top eight teams at the end of the season make the tournament.

The Panthers lost 3-1 to Southern Illinois Edwardsville earlier this season at home.

Having played Southern Illinois Edwardsville before, the Panthers have an idea of what kind of team the Cougars are and know what makes them successful.

“SIUE is a good ball control team,” Brown said. “We watched film against them and focused on where we can be successful against them. I think aggressive serving and hitting spots will be crucial for this game.”

The Cougars have the highest hitting percentage in the OVC at 22.7 percent, which is just above Austin Peay at 22.6 percent.

Just as Brown said, hitting spots will be crucial for the Panthers as the Cougars also have the lowest opponent hitting percentage. Teams are hitting just 16.7 percent against them.

To add to that; Southern Illinois Edwardsville does not let many balls hit the ground where it averages 17.49 digs-per-set. Brown said the team’s mindset for Wednesday is “finish strong.”

“We have so much potential and talent that as long as we play our game, we will be successful,” Brown said.

Following its match with Southern Illinois Edwardsville, the Panthers are back on the road this weekend against another tough Belmont team.

The OVC tournament is Nov. 16-18 at the regular season champion’s home court.