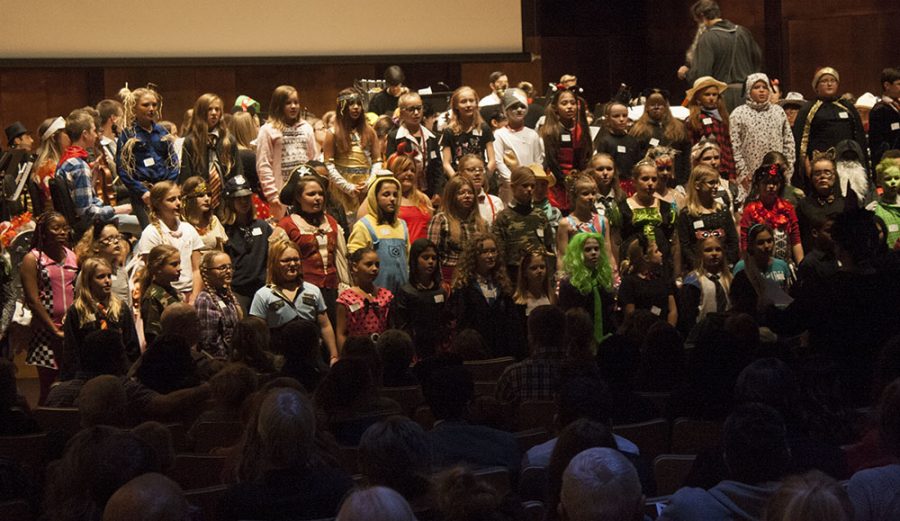 The Eastern Symphony Orchestra performed spooky symphonies for a full house during Fright Night in the Doudna Fine Arts Center.

Dan Crews, Doudna’s director of programming and publicity, said the venue sits 568 people, and they had every ticket sold by the beginning of the concert.

Clinton Johnson, the graduate conductor for Eastern Symphony Orchestra, wore a whoopee cushion costume as he conducted, and most other performers wore their costumes as well.

Members and alumni of the Symphonic Honors Initiative Program also played with the Eastern Symphony Orchestra.

Richard Rossi, the director of orchestral and choral activities, said SHIP used to stand for Strings Honors Initiative Program, but they realized they needed more than just string instruments in the symphony two years into the program.

“There aren’t a lot of string programs around this area, so we thought this would be a good way to get children in the community involved,” Rossi said.

Halfway through the concert, Terry Coulton was surprised with a plaque commemorating the 15th anniversary of SHIP.

“(Coulton) is the one who really spear-headed the program,” Rossi said. “I have to give more credit to her for all of this. She’s the SHIP mama.”

Children dressed up as Harley Quinn, witches and a box of Nerds candy for the costume contest part of the night.

Costumed children in the chorus and audience members alike walked around the concert hall to present themselves to the judges.

Ethan Hayward, a graduate student studying piano performance, said he became a judge for the costume contest because his choir director, Rossi, asked for volunteers to take part in the concert.

“I thought it would be a fun time,” Hayward said. “It was a great experience.”

Multiple children were chosen as winners, and each received a bag of candy for their prize.

The chorus also sang during one of the orchestral pieces, “Danse Macabre, Opus 40” meaning “Dance with Death.”

During the piece, the children sang the letters of “Halloween” as volunteer music majors held up signs corresponding to the letter the children were singing.

Rossi said it was great to see so many children becoming involved with music.

“Many of them wouldn’t have the opportunity to hear this music without coming here,” Rossi said. “It does my heart good to see hundreds, literally hundreds, of them show up to enjoy the performance.”

Crews said it was exciting to see so many younger children participating in the chorus and the arts despite recent budget cuts.

“Sometimes the programs that get cut are the arts programs,” Crews said. “It’s funny because the arts play a role in everyone’s life whether they’re an artist or not.”