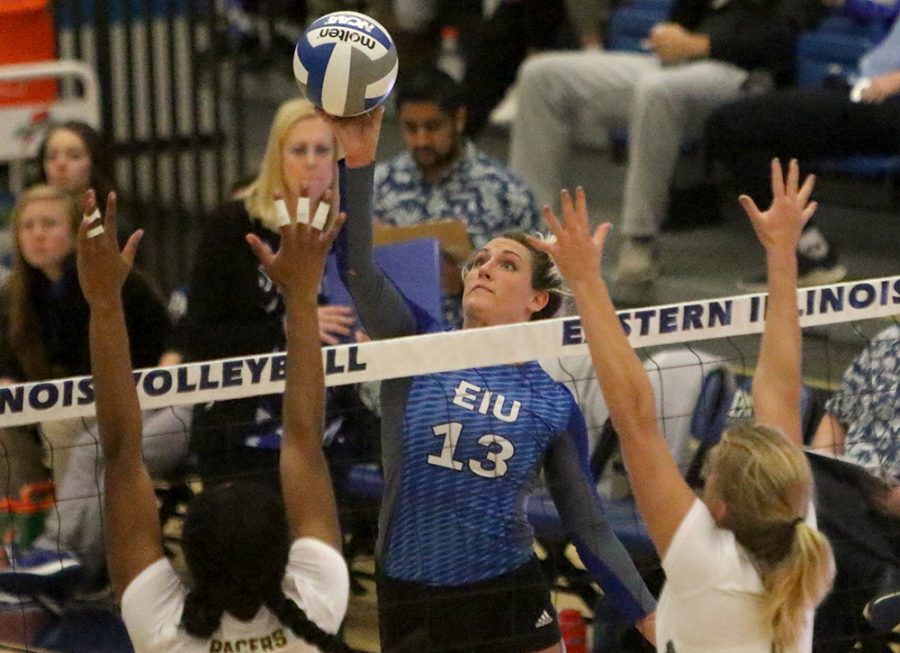 Maria Brown goes up for a kill against Murray State Saturday afternoon at Lantz Arena. Brown finished with 10 kill in the Panthers 3-1 loss that day. Brown was one of three seniors that were honored before the match on senoir day.

Coach Sam Wolinski, who undertook the position in 2014, witnessed their germinating development throughout her tenure. Chemistry and connections on the court, translated to relationships off it.

“Obviously there’s always going to be the volleyball stuff, but it’s probably the stuff off the court and their relationships with the players that you know we’ll truly miss,” Wolinski said.

The first set, which featured seven ties and three lead changes, wavered until Hueston delivered the fateful kill to close it out.

For the match as a whole, Murray State’s 77 points compared to the Panthers’ 70, exemplified the back-and-forth nature of the match.

While the Racers broke down in the first set, Murray State rallied back, winning the next three.

Although the Eastern volleyball team lost, the team orchestrated a well-tuned attack, augmenting its rhythm offensively. Hueston and Brown amassed 19 and 15 kills respectively.

“I think the response by our team, after our performance against Austin Peay, we came out strong and that I was really happy with,” Wolinski said. “I thought Annie Hughes did a great job digging the ball. Maria had a great game attacking as well. We played better in our systems, just unfortunately not well enough to pull off the victory.”

Brown had a team-high 10 kills on the night and eight digs, second to sophomore libero Anne Hughes’ 14 digs. Hueston notched nine kills and had three block assists. Hueston said her kill game is more about placement than showmanship.

“That’s definitely my type of game. I like to see the court versus just trying to smash it. It might not look the coolest, but that’s okay,” Hueston said.

Hueston had some big kills at key moments in the game. In set one, the Panthers were down by one, and junior setter Taylor Smith gave Hueston a high set. Hueston hit the ball hard, and the ball rolled over the top of the net and landed on the ground for a kill to tie the score at 10-10.

The Panthers led just five times throughout the three sets. Austin Peay earned 41 kills to Eastern’s 35, and the Governors out-blocked the Panthers by two with six blocks on the night.

Austin Peay did not let much drop, and it showed with its 54 digs. Digs were spread evenly through Austin Peay’s back row as Ginny Gerig and Christina White each had 10 and Allie O’Reilly managed a team-high 16.

Hueston said the most challenging part of playing Austin Peay was the depth of the team’s playing ability.

“They’re pretty deep, I would say. They have some pretty big hitters, and they bring a lot of energy to the court,” Hueston said. “I think they’re just a solid team and they know they’re good, and they play that way.”

The Panthers and Governors each slammed 14 team kills down in the first set, but Austin Peay led in kills in the last two sets.

Austin Peay continues to lead the conference with an 11-1 record, and Eastern drops down to sixth place.

The two losses this weekend set the Panthers’ record at 6-6 in conference play, with the OVC tournament looming in the coming weeks.

Tom O’Connor and Kaitlin Cordes can be reached at