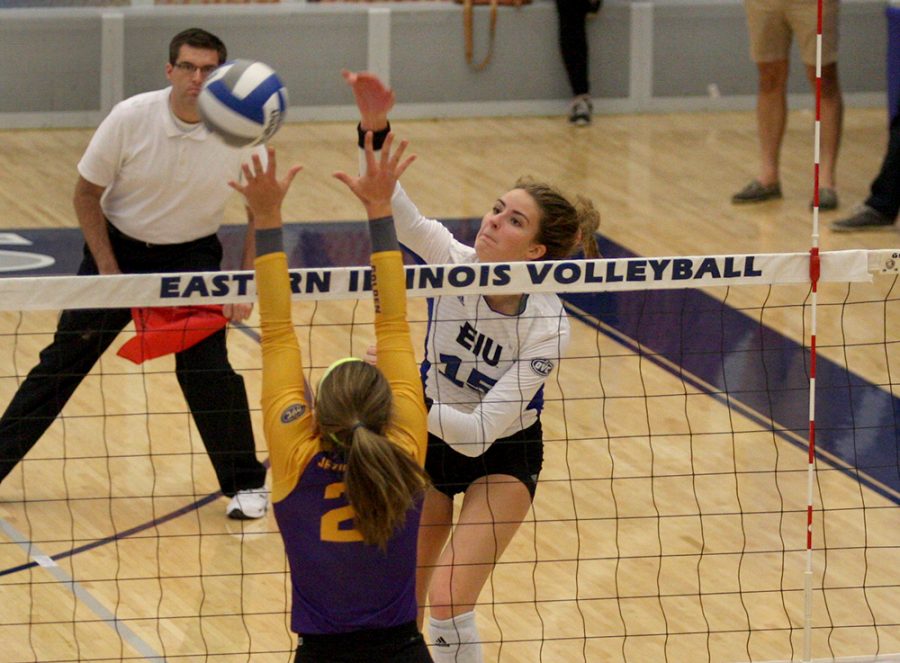 The Eastern volleyball team hosts its final two home matches this weekend as it takes on Austin Peay Friday and Murray State Saturday.

The Panthers will have a chance to redeem themselves as they play Austin Peay and Murray State for a second time this season. Eastern kicked off conference play with a match against Murray State in which the Racers won in four sets 23-25, 25-20, 25-18 and 25-23 on their home court.

The Governors have had an impressive season so far as they are 9-1 in the conference and 21-4 overall. The team’s conference record puts it at the top of the Ohio Valley Conference Standings with a conference-high winning percentage of 0.900.

Austin Peay will enter Friday’s match riding on a four-match winning streak to accompany its 8-2 away match record. The Governors recently downed the likes of Tennessee Tech, Jacksonville State, Belmont and Tennessee State. Eastern, too, has defeated each of these teams except Belmont as the Panthers have yet to face the Bruins.

Austin Peay was led by an aggressive front row in its victory over Tennessee State. Outside hitter Cecily Gable and middle Ashley Slay each recorded 16 kills, a season high for Gable.

Outside hitter Christina White completed the front row attack with 11 kills of her own and a team-high four aces. The Governors have no shortage of options for their dominant front row as middle Logan Carger dropped in with 10 kills and one block.

Murray State has dropped in OVC rankings since the Panthers traveled to Kentucky in mid-September. The Racers are now ranked third in the conference with a 7-3 record and a 15-7 overall record.

The Racers have a 4-4 away record, which may give the Panthers some leverage in the match. However, Murray State comes into Saturday’s match on a three-match win streak. Their latest wins come over Tennessee Tech, Belmont and Tennessee State.

Last Saturday’s match was a clean sweep for the Racers as they defeated the Tigers 28-26, 25-21 and 25-18. Murray State showed up to the match with a feisty front row. Outside hitter Rachel Holthaus notched a team-high 13 kills followed by outside hitter Rachel Giustino’s 11 kills and middle Katirah Johnson’s 10 kills. Giustino and Johnson each recorded three kills apiece as well.

The match was the Racers’ seventh sweep of the season and featured their second highest scoring set on the year. Murray State will face No. 2 Southern Illinois Edwardsville before facing the Panthers.

Friday’s match will start at 7 p.m. and Saturday’s competition is at 2 p.m. The Panthers will play four more matches before the Ohio Valley Conference Tournament. Eastern is tied with Belmont for fifth in conference standings at 6-4 apiece, but the Panthers lead in overall winning percentage at 0.545.