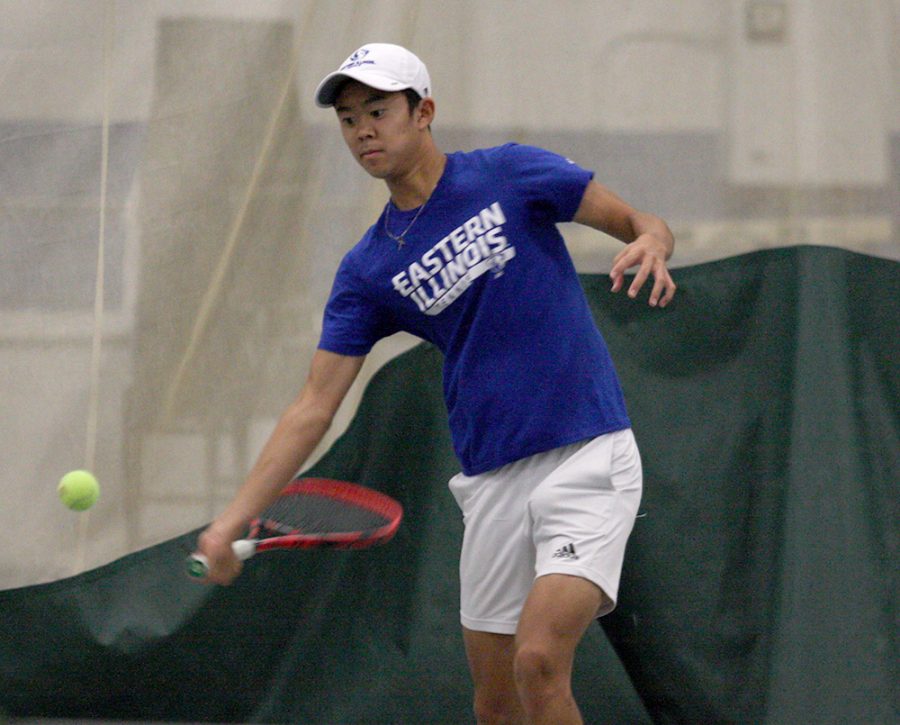 Freshman Kaisei Kuroki returns the ball in practice to freshman Logan Charbonneau in practice Wednesday in the Lantz Fieldhouse. Kruroki is from Tokyo.

Charleston, Ill. may not be the first place you would think of as home for a world-traveled individual, but for freshman men’s tennis player Kaisei Kuroki, that is exactly what Charleston is.

Kuroki was born in Tokyo, Japan, but has lived in five different countries on four different continents.

The majority of his life was spent in suburban France, as well as rural parts of both Zambia and Zimbabwe— two countries in the southern portion of Africa.

Kuroki enjoyed each one of his residences for different reasons and has no favorite, he said.

“I can’t really choose my favorite because they all had qualities that I enjoyed. Africa had the nature. Japan had the food. France was where I made most of my close friends and the cities were beautiful,” Kuroki said.

Kuroki’s massive intercontinental movement is due to his father’s career path.

That movement actually led to Kuroki’s passion for tennis, a sport he started playing at five years old.

The first time he played tennis was on the court he had in his backyard as a young boy in Zimbabwe, where he lived from the time he was two to six years old.

At 13 years old, tennis came to the forefront of Kuroki’s life. He moved to France, where he attended a French tennis academy for high school.

“I learned how to get along with everyone no matter where they are from. My high school was the most diverse since everyone was from a different country, therefore I learned about many different cultures,” Kuroki said.

After graduating high school Kuroki came to Eastern. He said coach Sam Kercheval, as well as the rural community atmosphere are some of the main factors that brought him here.

“I came to Eastern because of my coach and to be able to compete in a Division I school. Also I liked the location of Charleston, I didn’t really want to be in a big city,” Kuroki said.

Kercheval scouted Kuroki coming out of high school in France.

“He’s a good kid. We look for good people, we look for good students, guys who want to work hard. Tennis is just part of the equation, but he fit what we’re looking for,” Kercheval said. “He’s done a good job, he’s got a lot of room to grow, but he’s on the way.”

Kuroki’s career at Eastern started on a high note at the River Forest Invitational, which was his first tournament.

He defeated Illinois-Chicago sophomore Niko Wasilevicz in a second-round tie break after dropping the first set (5-7, 6-2 [4]). He credited his speed and agility for the victory.

Since then his production has slowed a bit as he adjusts to the speed of the college game.

“For him being a freshman, it’s about learning what college tennis is all about because he’s coming from across the world,” Kercheval said. “Now he knows what the level is, now he realizes how much he needs to work.”

Kuroki still has four spring seasons ahead of him in Charleston.

The Panthers begin spring play Jan. 1. They begin against the Indiana in Bloomington.

Parker Valentine can be reached 581-2812 or [email protected]