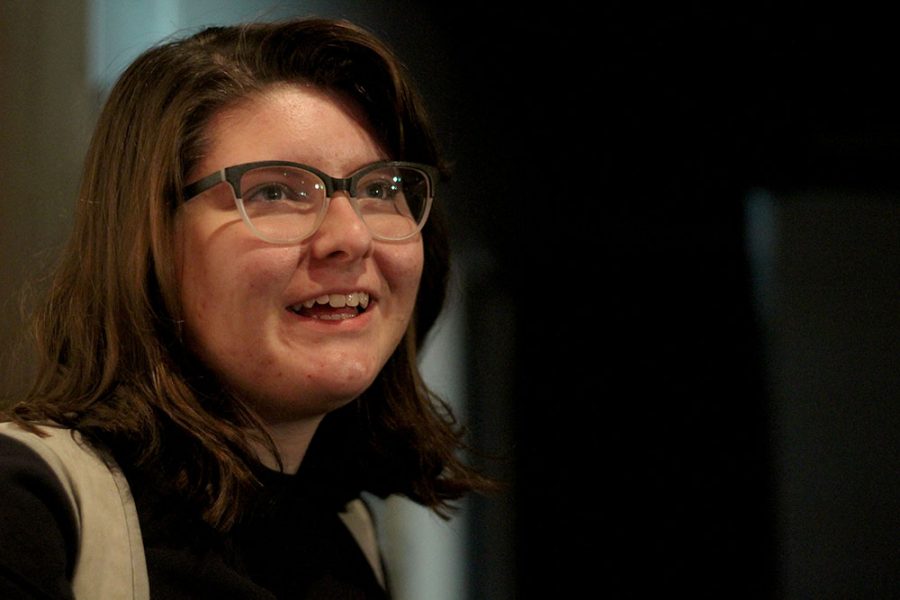 Grace O’Brien, a sophomore graphic design major, attends You Take the Floor, an event hosted by the Blue Room Magazine, in the Doudna Fine Arts Center Wednesday evening. She said she just got off of work so she decided to stop by the event to participate.

You Have the Floor, drew a small crowd of students from almost every major to showcase their own work and experience the presentations of other students.

The performances ranged from a student explaining the process of papermaking to other students showing their artwork designs and describing the techniques they used.

You Have the Floor collaborated with Blue Room Magazine in an attempt to get more students involved and more submitted work.

Natalie Standley, the creative director of Blue Room Magazine, said they wanted to collaborate for the event so they can get the word out about the magazine. Standley also said the event is for any person to “have the floor” in order to present their creativity and demonstrate it to other students and professors.

“Hope to get the word out because (the magazine) is a cool concept and gives students on campus a way to express themselves,” Standley said.

As students arrived they started gathering around on one side of Gallery Room 1910 of the Dounda Fine Arts Center.

The first performer of the evening was a female who captured everyone’s attention with her sultry voice and guitar while she sang two of her original songs and a cover song.

Some of the students that attended did not have a fine arts background, but still came to show support.

Taneya Boyde, a senior marketing major, said she just came to see what was on campus and to feel more inspired, but has no art background or friends performing.

“Just seeing someone else express their creativity inspires to bring out my creativity side,” Boyde said.

Margaret Kilbane, an art graduate student, said she had never been to an event like this one before, but also came to support the art community and some of her friends that performed.

“I know some of the people performing and came to offer support (the) art community,” Kilbane said.

There was no order of the performances, so anyone at the event was welcome to show something if they wanted after one was finished.

Jackie Baum, a senior graphic design major, performed a short film presentation, which she said took her two weeks to create something like that and about 10 hours to develop.

Baum said she has not performed a film production before, but has put out her other work in exhibits.

“I love animation (graphic design) and like to hear what others think of my work and it is a good experience to put in my resume,” Baum said.

Half way through the event there was some technical difficulties, but students and professors still shared some stories as they waited.

Alexander Camden, a graphic designer for Blue Room Magazine, said it was great seeing a supportive community and seeing people share their talent and give feedback to them.

“I like how it was a community because usually you see everyone is doing their own thing,” Camden said.

The Blue Room Magazine had a table set up for anyone who wanted to pick up an application to submit any of their work.

“I hope the magazine got a lot more exposure because we are kinda low and even if they don’t join (the magazine) I hope they submit some of their work at least,” Camden said.

Standley said the application for Blue Room Magazine will also be available now in the website www.blueroommag.com until Nov. 15 to submit.

Juniors and seniors will be able to apply for a featured interview in the magazine, while freshmen and sophomores will only be able to showcase their work.