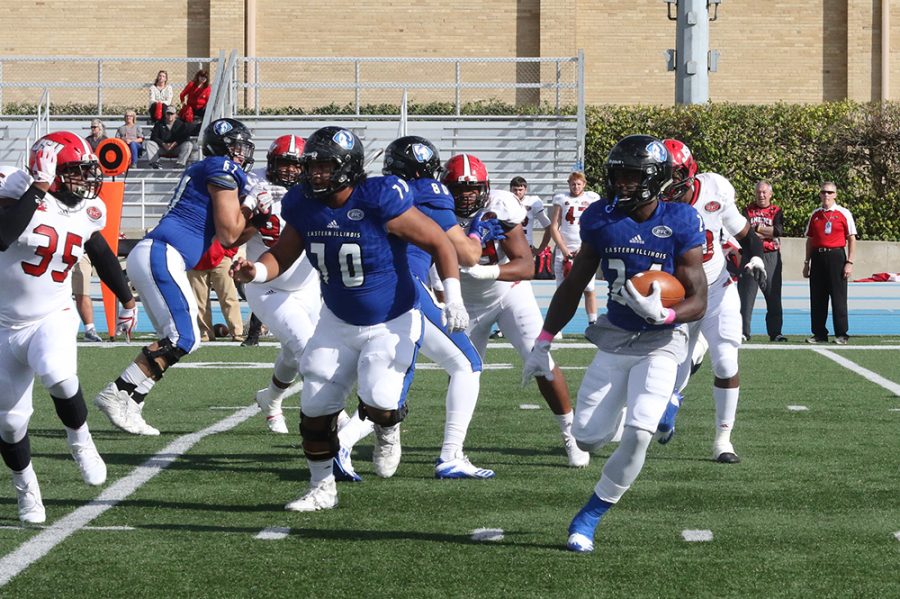 Sophomore Darshon McCullough runs the ball for Eastern during the Homecoming game against Jacksonville State. He had 13 yards rushing on five attempts in the Panther’s 30-14 loss.

Eastern being up 14-9 at halftime against Jacksonville State, the No. 3 team in the FCS and the best team in the OVC year after year was not a fluke.

The Panthers were 4-0 in OVC games, undefeated just like Jacksonville State. But No. 3 teams and 27-game win streak teams are going to do what they do — win.

Saturday’s game was only the first time the Gamecocks trailed at halftime since 2013, which was also against the Panthers, and the last time they lost an OVC game.

And that is exactly what happened Saturday at O’Brien Field for Eastern’s Homecoming game. A rough second half for Eastern that yielded just 83 yards of total offense, led to Jacksonville State’s 30-14 comeback win.

“We played a pretty clean first half,” coach Kim Dameron said. “Against a really good football team, you can’t make the type of mistakes that we made.”

He said it was a mixture of obvious mistakes and mental lapses that hurt Eastern the most.

Dameron always uses the term “we shot ourselves in the foot.”

Rushing for 300 yards like it did last week against Murray State, Eastern knew that would not be the case against a defensively-sound team like Jacksonville State.

Once Eastern got down, and with a run game that was almost non-existent, the Panthers fell back on the pass game even harder.

The wind was howling out of the south end zone, hard enough to knock down passes, passes that were intercepted by Jacksonville State that led to touchdowns.

“The one that was the turnover, that was a ball that we don’t need to throw into the win,” Dameron said. “We had the win on some of the others and we got a little ‘deep happy’ to be perfectly honest.”

Control was the key to Eastern’s big plays in the first half. Picking up a blitz, Martin hit sophomore running back Darshon McCullough for a 40-yard score. Even on the Flea Flicker pass to redshirt senior Addison Bounds for a 25-yard gain was crisp.

But during Jacksonville State’s 21-point second half, Eastern had to play catch up from the start of the third as Martin’s interception happened within the first two minutes.

And they continued to fall back on ‘deep happiness’ to get it back in the game once it trailed 16-14.

“I think sometimes you try to get it all back at once,” Dameron said. “As opposed to running your offense and maybe taking some under throws. Those are the things that we have to correct.”

Dameron said it started to snowball at the end.

“I don’t think the score is indicative how close the game was,” Dameron said. “Nonetheless, we have to keep them out of the end zone. We’ve got to play the full 6 minutes and we had been doing that and I was disappointed (that we didn’t Saturday.)”