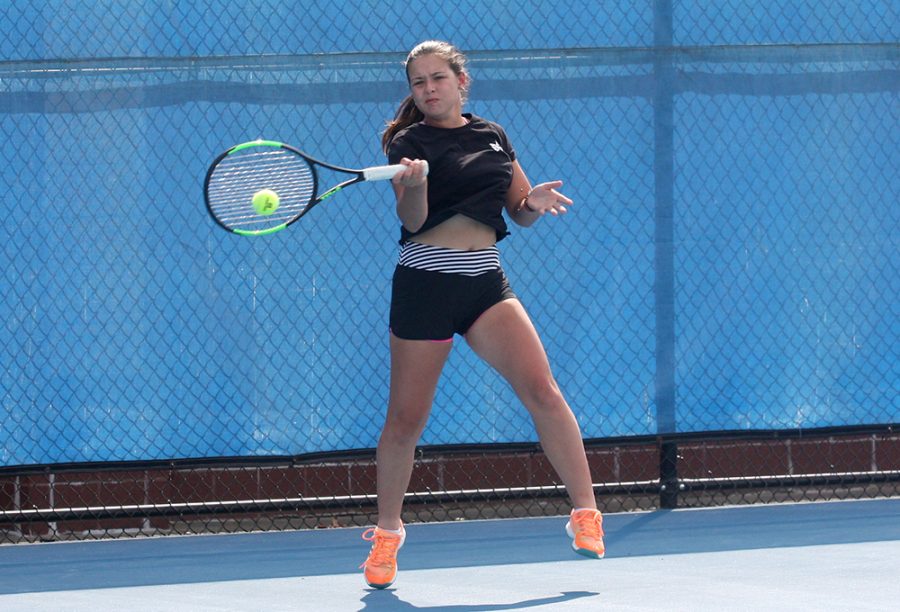 Sophomore Emily Pugachevsky returns the ball to Abby Carpenter in practice Sept. 21 at the Darling Courts. Eastern played at Illinois State this weekend.

The Eastern women’s tennis team completed their fall season in dominant fashion over the weekend.

The Panthers were in Normal Saturday and Sunday at Illinois State University for the annual Redbird fall invitational. They recorded singles ten wins at the event, as well as recording wins in doubles.

Along with Eastern, three other universities were in attendance at the invite. Butler, Saint Louis and the host ,Redbirds ,rounded out the teams in action over the weekend.

In their second event in less than two weeks, junior Srishti Slaria and freshman Rachel Papavasilopoulos went undefeated in singles play at the meet. They went a combined 5-0.

Their wins came with the two Panthers fresh off of the ITA regional tournament at the University of Michigan, where the duo recorded victories as well.

Slaria recorded a doubles win over the weekend as well. Her and partner sophomore Stella Cliffe defeated the Butler senior duo of Jordan Minnick and Bailey Padgett 6-3.

Papavasilopolous had a dominant performance in Normal as well. The freshman went 2-0 for the weekend.

Contreras earned her victory in a three set match against fellow freshman Lauren Marx of Butler. She defeated Marx in a competitive third set (6-2, 3-6, 10-8).

With fall play concluded for the Panthers, Eastern will have about a month and a half off before their spring season begins in January.

The Panthers will be back in Normal to start spring play. They will take on Illinois State Jan. 20.