Charleston bundles up and hits the parade route 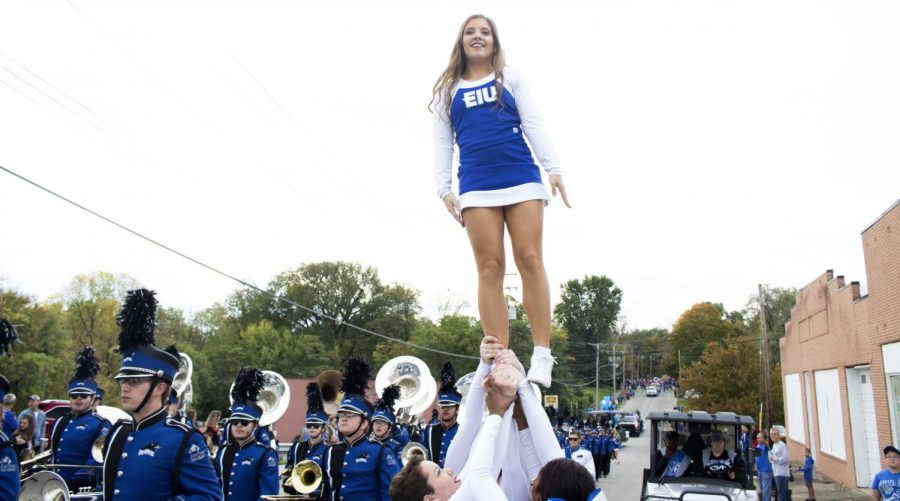 An Eastern cheerleader is held up along side the marching band at the homecoming parade on Seventh street.

The sound of drums and horns echoed down Sixth and Seventh streets, hitting the Charleston Square and rattling the leaves off the trees early Saturday morning during this year’s Homecoming parade.

Parents told their children “it’s coming, it’s coming,” as they grabbed their neon-colored Halloween pumpkin buckets and lined the curb along Seventh Street, anticipating the flying candy, the marching bands and the floats at this year’s parade.

Tom Watson, a retired Charleston fire chief, said he and his family rarely miss the parade, which they have been attending for nearly 43 years.
“I like the bands,” Watson said. “You get to see people in town and it brings everyone out to support each other.”

Watson and his daughter Crista Snider, a 1997 Eastern graduate, said every year they sit in the same spot.

The only thing that has changed over the years is the addition of a few more family members.

“This bag is filled, and there’s two more like it,” Snider said, referring to the overflowing McDonald’s bag of candy one of her three children hauled in as an early Halloween gift to themselves.

Snider and Watson said the parade is all about uniting the community and showing support for the university.

“I had a good time at Eastern and it brings back good feelings,” Snider said.

Snider said she brings her children to the parade to expose them to what Eastern is like.

“Eastern is a huge part of the community,” Snider said. “(The parade) is not as big as it was but it could be great again.”

Watson said despite the small size of the parade, it still is as nice as it has always been.

Everyone smiled and cheered for the floats and people who waved and walked along the parade route.

Lou Conwell, a Charleston resident who lives on the parade route, said the experience of living there for many years has been fun.

“It’s a good chance to get friends together to support EIU,” Conwell said. “I really do appreciate seeing international students and the band.”

Charleston resident Dan Cougill, who also lives on the parade route, said the Homecoming Parade has changed dramatically over the past years.

“When I grew up, the parade was even better than this,” Cougill said.

He said even though the parade was not as great as he remembers them from his childhood, everyone involved with the parade this year did a great job with it.