Volleyball at home for Homecoming 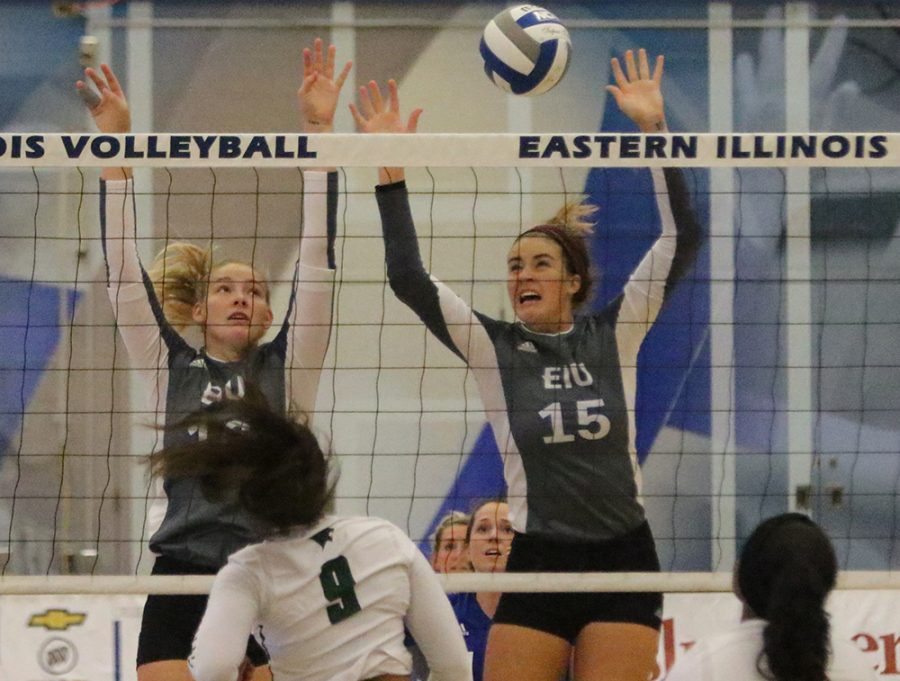 Laurel Bailey and Maggie Runge go up for a block in Eastern’s game against Chicago State on Sep. 9. The Panthers lost the match 2-3 at Lantz Arena.

This is the only time the Panthers have played either team this season. Jacksonville State is tied with Eastern in conference rankings, entering the match at 4-4. Tennessee Tech is seeded last in the conference at 1-7.

The Panthers will play Tennessee Tech first on Friday. The Golden Eagles won the last meeting, but Eastern pushed Tennessee Tech to five sets (25-21,18-25, 25-19, 23-25, 18-16). Eastern coach Sam Wolinski said the key to winning Friday’s match is to stick with what her team knows.

“We need to make sure to stick to our style of volleyball and the game plan to win on Friday,” Wolinski said.

Tennessee Tech has lost its last four matches, including its most recent competition against Murray State. Murray State managed a three-set sweep, beating the Golden Eagles 25-12, 28-26 and 25-14.

The Golden Eagles’ outside hitter Shealene Little will lead Tennessee Tech’s offense as she is ranked fifth in the Ohio Valley Conference in kills. Little leads her team in kills as well with 211, and she averages three kills per set. Little also holds the top spot for points scored on her team with 224 points.

Next up for Eastern will be Saturday’s match against Jacksonville State. The Gamecocks are 18-9 overall, and they are 5-5 when playing away games. Eastern has a winning record at home as they are 6-4 when they host.

Jacksonville State has won three of its four most recent OVC matches with its latest lost coming after a home game against Murray State last Friday. The Gamecocks defeated the Racers in four sets.

The Gamecocks’ outside hitter Allyson Zuhlke is also a conference-ranked player as she is fourth in kills. Zuhlke has a team-leading 347 kills and also has the most service aces at 27.

Eastern has three conference-players of its own. Senior middle Allie Hueston, junior setter Taylor Smith and sophomore libero Anne Hughes; each are currently ranked in the top 10 in multiple categories.

Hughes leads the conference in digs, as she has notched 351 digs against conference opponents. Wolinski said Hueston, Smith and Hughes have been a vital part of the team throughout the entire season as well as conference play.

“They have been consistent and go-to’s for our team, so it is great to have them leading statistically (and) leading by their play and energy as well for our team,” Wolinski said.

Both Friday and Saturday’s matches begin at 7 p.m. at Lantz Arena. The Panthers will have just two more home matches following this weekend’s competition.