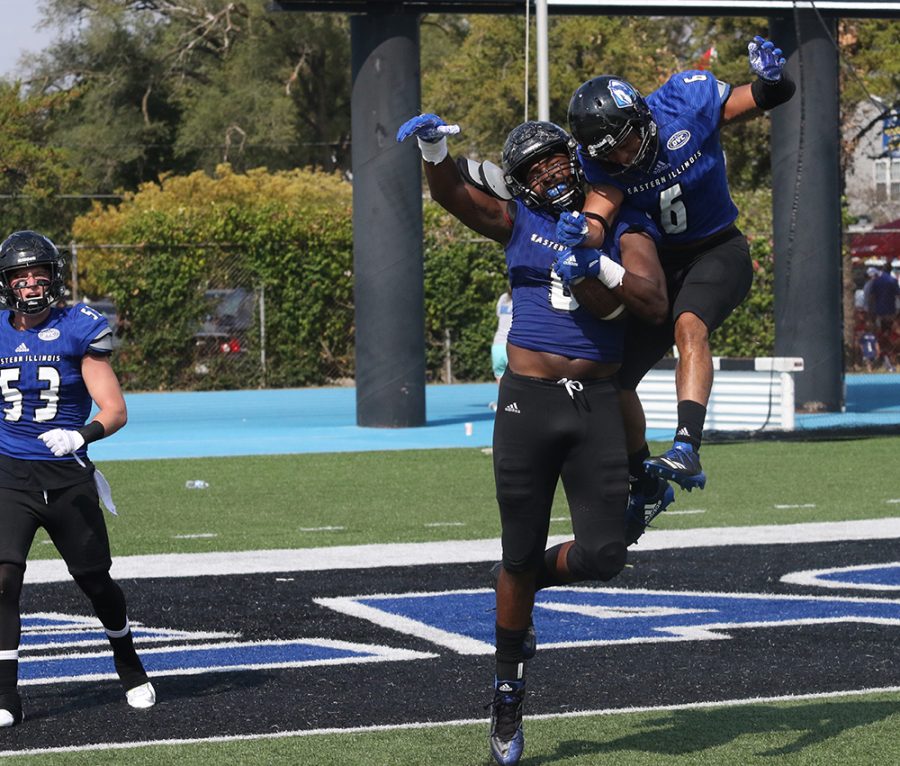 Eastern defensive end Mack Weaver celebrates with teammate Tray Mitchell after scoring a touchdown in the second quarter of their game with Illinois State. Eastern was beaten 44-13 by the Redbirds.

Jacksonville State has won 27 conference games in a row after a win against Eastern Kentucky last week extending its longest active Division I win streak.

That is what Eastern has to get by to improve to 5-0 in Ohio Valley Conference games Saturday and take over sole possession of first place. The Panthers and Jacksonville State are the only two undefeated teams in the OVC.

Jacksonville State is 3-0, having played one fewer game than Eastern.

Jacksonville State will be the toughest team Eastern plays in the OVC, coach Kim Dameron said.

The Gamecocks may be the toughest team Eastern goes up against, but Dameron does put any more pressure on his team.

“We don’t ask our guys to rise to the occasion,” Dameron said. “We ask them to fall back to their training.”

Last week Eastern picked up another gut-wrenching win against Murray State, led by a 351-yard rushing attack, but Jacksonville State’s defense allows less than 100 yards per game on average.

The Panthers came out with a 27-24 double overtime win last Saturday.

Jacksonville State can stop the run, but Eastern is going to have to get a run game going, Dameron said.

“I think we’re going to have to be able to run the ball, and I do think we’ll be all right and be successful in being able to sustain some drives,” he said.

Eastern put together a balanced offense with it rushing attack, coupled with 192 yards through the air.

Redshirt junior quarterback Bud Martin threw a touchdown and three interceptions last Saturday in his first start of the season. One ball went off an Eastern receiver and into the hands of Murray State’s defender.

Dameron said there are times where Martin gets a little bit too excited, but went back and said if he sticks to his training he will be fine.

Offensively for Jacksonville State, it can score— and it can score a lot. The Gamecocks average 29.5 points a game this season and allow just 17 .7 to their opponents.

Since the first game of the season, Eastern’s defense has been solid in keeping scores close and allowing for the offense to make its comeback wins or hang on just long enough to pull it out.

Redshirt senior defensive end David Johnson has 34 tackles this year including 4.5 for a loss, as well as one sack.

What Johnson is looking for is run first and worry about the pass second. Jacksonville State’s two quarterbacks Bryant Horn and Kendrick Doss can run the ball.

The two have rushed for a combined 446 yards in six games.

“We’re going to go out and stop the run and execute to the best of our abilities and go out there and try and get this win,” Johnson said.

Even though having mobile quarterbacks gives the Eastern defense something else to watch for and one extra player on the field who may break off a run, Johnson and the defense prepare the same, he said.

“We take every week, like every week,” he said. “If you’re a mobile quarterback, if you’re a statue, we play them all the same. We try to keep them in the pocket, don’t let them scramble but probably be a little more cautious of him scrambling and running around.”

Eastern and Jacksonville State kick off homecoming at 2 p.m. at O’Brien Field.