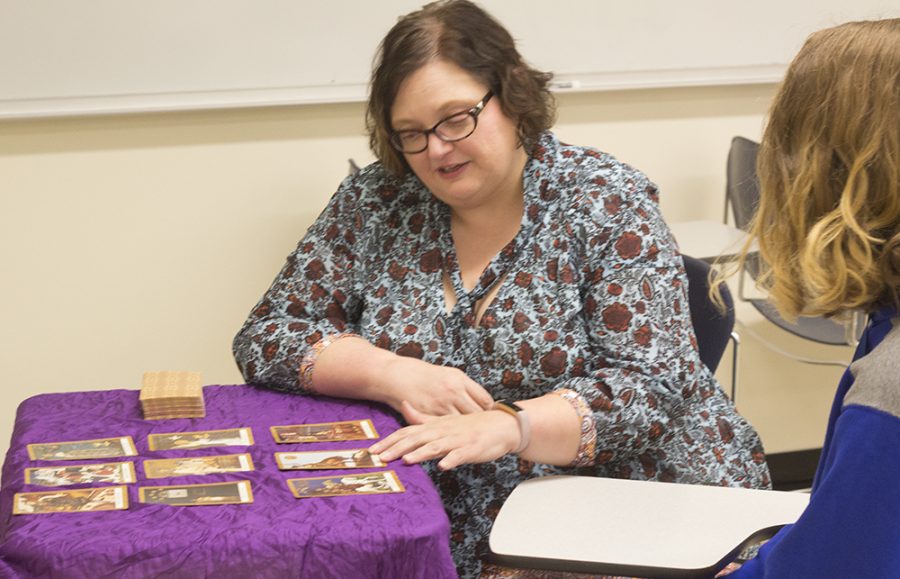 Students screamed, played bingo and got their tarot cards read last night on the third floor of Coleman Hall.

Amanda Kiessling, a sophomore Spanish major, had her tarot cards read for the first time at Haunted Coleman Hall.

“My friend told me about Haunted Coleman Hall, so we figured it would be a good time and decided to come check it out,” Kiessling said.

As soon as the tarot card room opened, students began forming a line to get their cards read to them. English Club members began to hand out waiting numbers to students in line so they could enjoy other activities.

The participation in the activities was so high English Club extended the end of the event an extra hour from 8 p.m. to 9 p.m.

“I definitely enjoyed getting my cards read,” Kiessling said. “It was really cool to see what the cards had to say.”

Kiessling said it was her first time participating in a tarot reading.

“The cards were based on these medieval pictures, which looked gorgeous,” Kiessling said. “I split the deck three times, then she laid the cards out in a three by three square.”

Each row told Kiessling something different about her past, present, and future.

“The cards said that after I graduate, good things will happen to me,” Kiessling said. “That was nice to hear.”

Samantha Ward, a junior English major and treasurer of English Club, helped to set up the haunted classroom.

“It’s essentially a jump scare room,” Ward said. “People go in, and members of the English Club are waiting behind a make-shift wall made out of trash bags and duct tape.”

Ward said the English Club had Miranda Gomez, a junior English major and makeup artist for Haunted Coleman Hall, give them special effect makeup to make he experience that much scarier.

“A lot of people have been complaining about having a long day or a long week, and this is just a fun night to get a tarot reading, watch some movies and have some laughs,” Ward said.

Lucy Hill, a freshman theatre and vocal performance major, said she heard about Haunted Coleman Hall via the advertisements written on the sidewalks.

Hill said she played bingo for most of the night and ended up winning the grand prize, a decorative book filled with short horror stories, from a game of blackout bingo.

The Halloween/Literary themed bingo used key words such as “Edgar Allan Poe” and “Frankenstein” on the cards instead of the traditional numbers and letters.

“Everyone was really involved in bingo and excited to play,” Hill said. “That was surprising because I figured not many college students would enjoy playing bingo.”

Many students agreed Haunted Coleman Hall and gatherings like it are important for Eastern’s community.

“As college students, we can all get wrapped up in homework and other things, so this is not only a stress reliever and something fun to do, but it’s something we can all do together,” Ward said.

Kiessling said events like this are a really good way to get people to come together.

“This is an English major sanctioned event, and yet there’s people from all different kinds of majors here,” Kiessling said. “There are people who probably don’t even come to Coleman here.”

Kiessling said she would come to another event like this and recommend others to as well.

“The only thing I would avoid is the Halloween movie,” Kiessling said. “I don’t do horror stuff.”