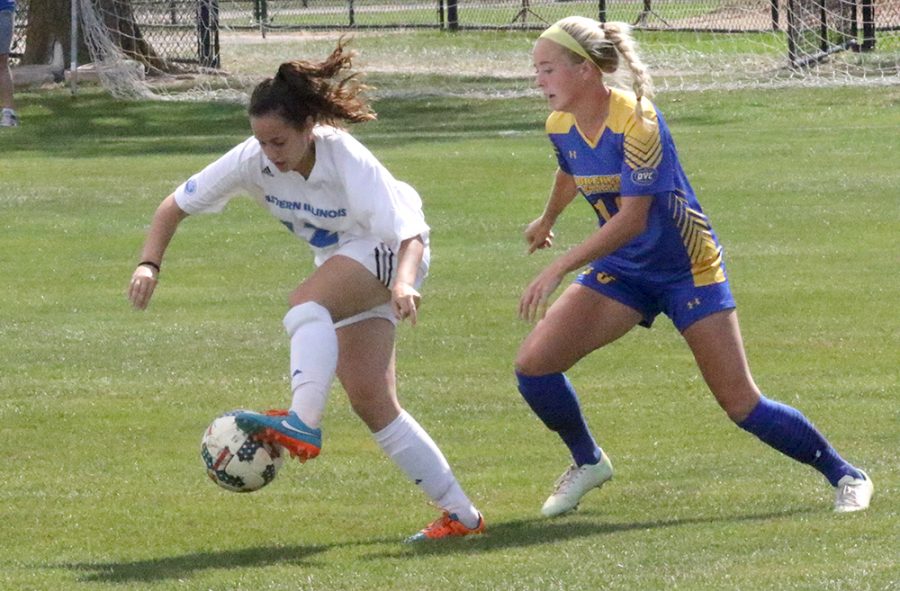 Itxaso Aguero dribbles away from a Morehead State defender in the Panthers’ 3-1 loss. Eastern plays its final game of the season Thursday at Murray State.

Three times this season, twice recently in conference matches, the Panthers have had the lead or have been tied in the first half, then lost the match in the second half in two of those situations.

Against Fort Wayne Sept. 8, Eastern had a 2-0 lead in the first half but lost the lead in the second half after the Mastodons scored two goals in 28 seconds in the 79th minute. Junior midfielder Kate Olson scored the game-winning goal in overtime for Eastern that day.

Then against Tennessee-Martin Oct. 15, freshman defender Haley Tausend gave Eastern a 1-0 lead in the first half, but similarly to the Fort Wayne match, the Skyhawks scored two goals in under a minute and took the lead, ultimately winning 2-1 over Eastern.

“I just think we try to be so offensive minded when down a goal or when we finally have shooting opportunities, that sometimes we lose focus at certain moments that cost us goals on defense.”

While the Panthers managed to win against Fort Wayne, the two losses to the conference opponents in Tennessee-Martin and Morehead State eliminated the Panthers from the OVC tournament.

As it stands, Eastern is last in the OVC with one conference point, earned in a 1-1 tie with Tennessee Tech Oct. 8.

Each game in conference play is important to try and get a spot in the OVC tournament, which takes the top eight teams in the conference. Between the two losses, Eastern also lost to Jacksonville State and Southeast Missouri.

Thursday is the last match of the season for the Panthers and they play the Murray State Racers, who are first in the OVC. It is a home match for the Racers, who are led by senior Harriet Withers, who has 12 goals this season.