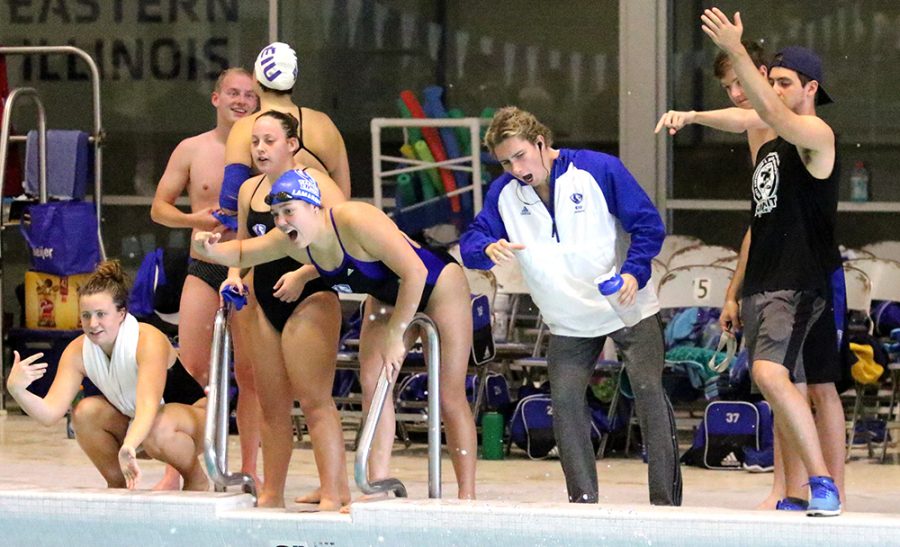 Members of the Eastern swim teams cheer on their teammates as they compete in their race. Eastern is 2-0 to start the season after a win against Lewis. Eastern has the weekend off from competition.

The Eastern men and women’s swim team are on a two-meet win streak as they prepare for their meet against Western and Butler on Oct. 28.

Over the past few years, the Panthers have lost to Western in individual meets as well as the House of Champions. However, what the Panthers have going for them this year than years prior is that they have this season with a 2-0 record.

Senior Steve Fishman is one of the Panther swimmers who have swam against Western for the past three years.  Fishman understands the competitive level between the two universities.

“The men’s teams for both EIU and WIU have always been great competitors to each other and it’s going to be a great motivator to both teams to race hard and fight for those wins,” Fishman said.  “I believe the team expects the same thing.”

Despite losing their previous meets to Western, the Panthers mentality of having a 2-0 record is their motivation to rise to the occasion and to prove themselves as a competitive force in the conference.

“I’m expecting a great racing atmosphere and some good times for my teammates,” Fishman said.  “We are really going to shoot for a third win.  We want to show that we are not afraid to get up and race and I think that will really show in this upcoming meet.”

In practices leading up to the swim meet, the men’s team have been working on a variety of tactics in order to continue their winning streak in 2017 and snap their losing streak against Western.

“In practice, there’s been a lot of underwater and some stroke work implemented in order to better improve performance overall,” Fishman said, “as well as conditioning to improve endurance.”

Junior Martee Grainger has experienced these competitive meets since she began swimming for Eastern in 2015-2016.  Even though the women Panthers are 2-0 against Western and have split the past meets with Butler, Grainger expects an intense meet, she said.

“We always go back and forth with Western and it’s usually a pretty intense meet,” Grainger said. “But the women’s team is also competing against Butler University who is right there as well.  It’s going to give a good glance for the women’s team to see how we are doing.”

What is different about this year from years prior for Grainger is how over the summer, she suffered a torn ACL.  Luckily for Grainger, her ACL only had a minor tear and did not require surgery.

This season, Grainger has been working on specific events and overall, regaining her form from last season.

“(I am) Always working on the 100-Free, but post injury, I’ve been trying to get back in shape for the 200-Free,” Grainger said.  “It’s been a really smooth transition; took longer than I would have liked, but it’s pretty much back to normal now which is nice.”