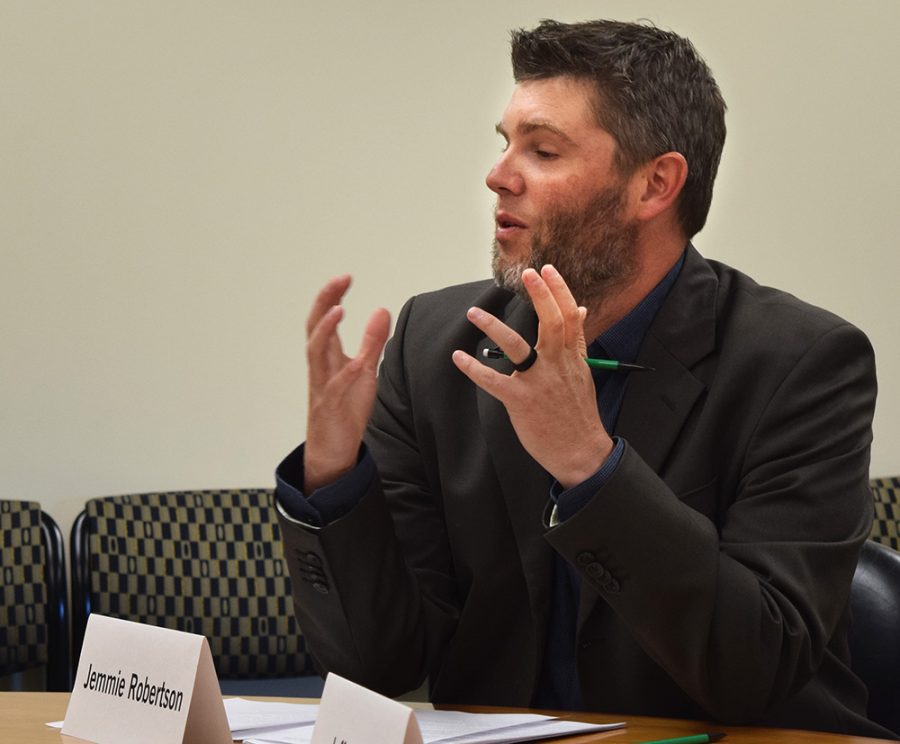 Brooke Schwartz | Daily Eastern News Faculty Senate chair Jemmie Robertson explains his meeting with Illinois Board of Higher Education to the rest of the senate. At the meeting, they had discussed Eastern’s future, especially where it concered the budget and the past budget impasse.

The Faculty Senate met on Tuesday to staff a committee that will review vitalization project Workgroups no. 8 and 9.

The committee to review Workgroups no. 8 and 9 from the previous year’s vitalization program was officially staffed by members of the senate who voted with a ballot during the meeting.

Economics professor Teshome Abebe said those who serve on the committee need to be prepared to think about the future of Eastern and not just the present needs of the university.

The administration faculty that will serve on the committee are still being decided on.

The committee’s first meeting will be at 3 p.m. in the Paris room of the Martin Luther King Jr. University Union on Friday.

The senate discussed the return of funds after the recent end of the budget impasse.

Many in the senate said consequences still being felt from that impasse.

Faculty Senate chair Jemmie Robertson discussed his meeting with the Illinois Board of Higher Education where the future of Eastern, especially where the budget is concerned, was discussed.

The future of tenure professors was mentioned, with Robertson saying it had been decided that tenure spots that were lost when people left during the impasse will not necessarily be filled, unless urgent need for them is shown.

Although the budget for this year has increased, cautionary measures are still necessary since the budget is still lower than it has been in past years, Hung said.

“When (the public) hears, oh, EIU is getting money, it’s important for us to say, it is a 10 percent cut compared to the last time we had a full budget, and that is the continuation of a downward trend of funding that cut our funding from the ‘70s to currently by over close to 50 percent,” Hung said. “I think that’s the story that we, as advocates, have to tell.”

Josh Norman, the associate vice president for enrollment management, also spoke at the meeting to answer faculty questions and update the senate on the upcoming marketing techniques that Eastern is employing, such as advertisements on music streaming service Pandora and billboards.

Norman also commented on the past budget impasse, saying that although the budget problems in the past have had many negative outcomes, there are people still supporting Eastern.