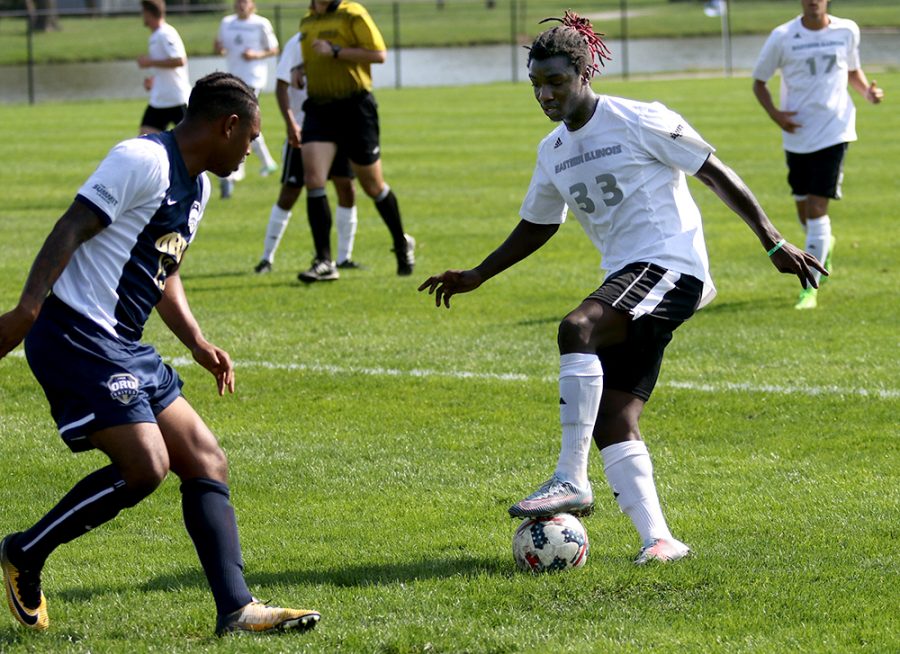 Freshman Simeon Packer attempts to dribble past a Oral Roberts defender in the Panthers’ 1-0 overtime win Saturday at Lakeside Field.

Minutes after his team closed out their first win since Sept. 10 on Saturday against Oral Roberts, Eastern men’s soccer coach Kiki Lara was happy for his team as they celebrated around him, but he knew the team had to start focusing on the game they would be playing three days later.

The Panthers host Belmont Tuesday at Lakeside Field as they seek their second win in three days.

Belmont comes into the game coming off a 1-0 win against IUPUI. However, prior to that Belmont struggled losing five-straight games. They have an overall record of 4-6-2 this season.

Belmont has scored 14 goals in its 12 games played this season and has taken 125 shots, good enough for a .112 goal percentage. However, defensively they have allowed 17 goals on 154 shots from opponents.

The Bruins have a knack for scoring early in games, 10 of their 14 goals have come in the first half of their contests this season.

“Belmont will be very good,” Lara said. “They are a team coming off a conference win Sunday as well. They will compete for and battle hard for 90 minutes.”

A name Eastern will want to keep an eye on is that of freshman Matteo Bennati. He has been the leader for Belmont on offense, he leads the team in both goals (3) and shots (21). He has started in all 12 games this season for the Bruins.

Junior Adam Voloder has been a nice compliment to Bennati in the offensive attack. He too has three goals for the season and has tallied 15 shots.

Protecting the net for the Bruins will be freshman Nicolo Dini who has been starting in the place of junior goalkeeper Alex Seeley. Dini has started in three games for the Bruins, appearing in five total games, and has made 18 saves working his way to a .720 save percentage.

Dini will be tasked with facing an Eastern team that is very confident coming off its win against Oral Roberts, in which the Panther offense broke a seven-game goal-less streak.

“Confidence and belief from this group has not swayed and it is something we work on daily; is determination and resilience aspect to building a program,” Lara said. “We stay committed.”

The last two games for Eastern have been ones the Panthers can be happy about. One was the win over Oral Roberts and the other, while a loss, was a game the Panthers lost in overtime to Bradley, despite arguably outplaying the Braves.

“We have seen qualities in both of the last two matches we want to repeat in terms of our control of the match in possession and frequency,” Lara said. “Allowing our numbers to get higher in the box and therefore create better crossing positions. We also want to see the same determination to win the match from all players a part of it.”

Lara also expects three or five players to return from injury in the coming weeks.

The game between Eastern and Belmont will be at 1 p.m. Tuesday at Lakeside Field.

JJ Bullock can be reached at