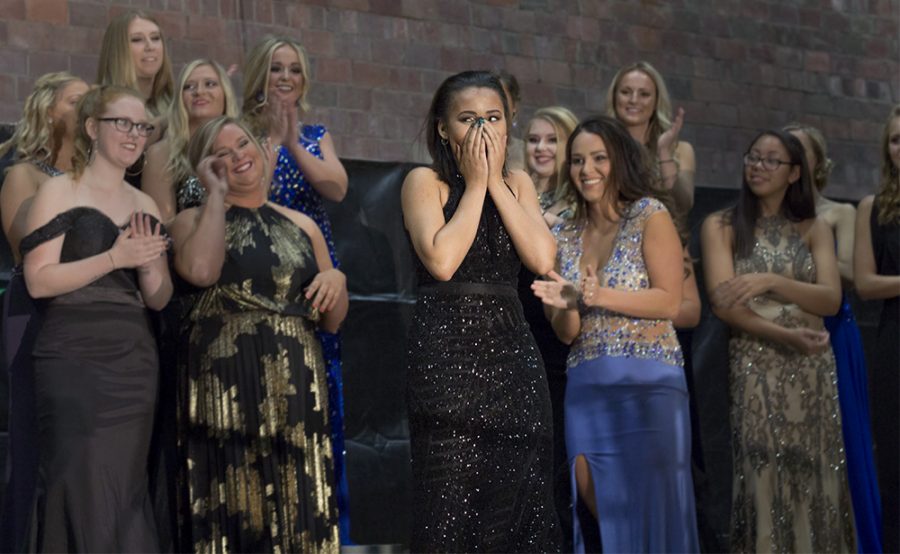 Allison Oates, representative of Lincoln Hall and the NACWC, approaches center stage to receive her crown at the coronation event Monday evening.

Cheers and chants filled McAfee Gym as students watched their friends and fellow organization members get a place on Eastern’s 2017 Homecoming Court during Coronation Monday night.

Carl Winton, president of Alpha Phi Alpha fraternity and in the NAACP, was named Homecoming King.

It was not only students who were named royalty on Monday.

After the student winners were announced and coronation was over, their friends and family rushed to the stage to greet them, take pictures and cheer.

Oates danced around, laughing on stage as she tried to keep her crown in place on her head while her friends came up to congratulate her on being named Queen.

She said she was really excited to win, as she worked hard to win the title in the weeks leading up to coronation.

“To have that done, it was an overwhelming feeling,” Oates said.

Oates and Winton campaigned to be queen and king by coming up with slogans, handing out flyers and candy at tables and reaching out to the community.

Between the two of them, Oates estimates they gave out about 250 pieces of candy.

“For the accomplishment to be achieved, and for us both to get the crown,” Oates said. “That was our number one goal.”

She said she was nervously anticipating the results the whole day leading up to coronation.

“I didn’t know so many people knew who I was,” Oates said. “To have the support behind it was amazing.”

Oates said she will be celebrating a “once in a lifetime” moment throughout the week.

“I never thought in a million years this is where I’d be standing,” Oates said. “To go out (as a senior) like this? With this heavy crown on my head? I can’t believe this is actually me right now. When they called my name I almost cried.”

She said she is proud to represent both Lincoln Hall and the NACWC.

“For my organization, (I’m) putting us out there. There are a lot of new students, incoming freshmen, who don’t know who we are,” she said.

Winton said he was nervous the whole day leading up to coronation.

“This is a big step to run so for us to win (felt good), especially with Allison,” he said.

He said he is happy to get to be involved in more Homecoming activities and represent the campus, and show the face of minorities on campus with the NAACP.

“Homecoming means having school spirit,” he said. “Having people come back to have fun, be alive.”

Beltran had two reasons to celebrate Monday night, as she was crowned princess on her birthday.

“I was excited leading up to the week,” she said.

Like Oates, Beltran did not realize so many people knew her.

However, being a tour guide, as well as the desk assistant at Thomas Hall, she said people might have seen her being really involved on campus, leading them to vote for her.

“It’s a nice feeling, because I’m able to represent the Latino community on and off campus, so people know that there’s a Latinos on campus and we’re doing great things,” she said. “One thing I do like is that our coronation, it was really diverse. That’s something I enjoyed seeing.”