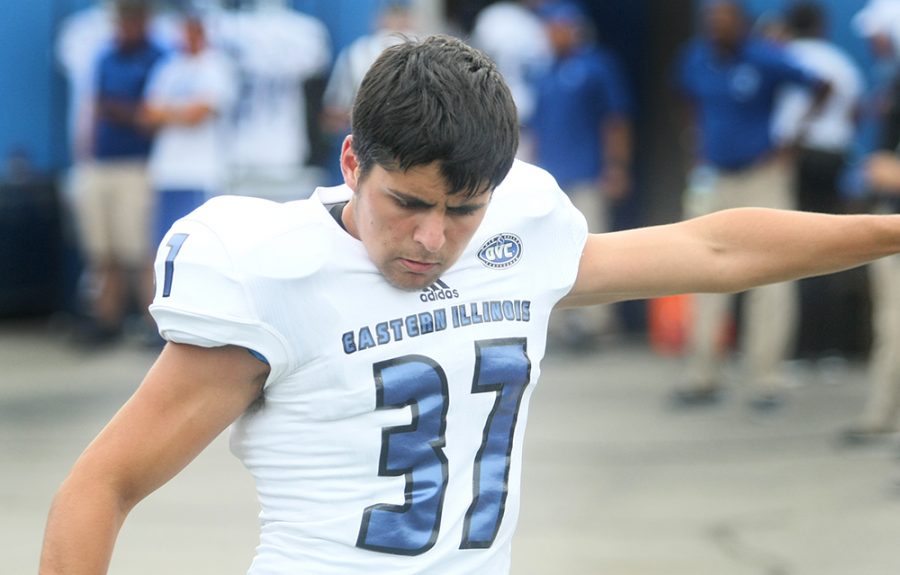 Freshman kicker Matt Severino gets warmed up just before the start of the Panthers’ season opener against Indiana State Aug. 31 in Terre Haute. Severino made two field goals in overtime against Murray State Saturday.

No one could have seen it coming — Eastern’s starting kicker Nick Bruno getting injured before the first game of the season.

Bruno was 7-13 on field goals in 2016 and was close to breaking the Eastern record for consecutive extra points made.

But before the opening kickoff for the 2017 season, Bruno injured his leg in warmups at Indiana State.

Since then, it has been a trial and error with true freshman Matt Severino and redshirt senior Nick Wilson to handle the kicking duties.

Both kickers have had their share of struggles, but Severino has been stepping up and hitting big-time kicks as of late and in do-or-die moments.

Severino had the game-tying field goal in the first overtime from 20 yards and the eventual game winner from 27 yards in the second overtime. Murray State’s kick was blocked on its next possession.

With how close Eastern’s OVC games have been, it was fitting that it would come down to Severinos’s right foot.

And as a true freshman, Severino recognizes the importance of his position.

That was not his first experience with hitting a big-time overtime kick. When the Panthers beat Tennessee State on the road Sept. 30, he was called upon to make a 42-yard field goal, one that was right on the verge of his range.

In regulation, the Panthers were in position for a similar field goal, but coach Kim Dameron passed on the field goal try and decided to go for it on fourth down.

He said he did not think neither Wilson or Severino could kick it that far, but in overtime, said he needed to give Severino a chance to come through and he did. Eastern won the game in the second overtime on a touchdown.

“Coach Dameron has told me since he has brought me into the program, he wants me to go out and compete,” Severino said. “He believes in my abilities.”

As a true freshman, he has been faced with pressure, and as a kicker, all eyes are on him to make the kick. And he has not let it get to him and has made the kicks when he is called upon.

He likes to keep it simple.

“It’s just what I’m out there to do,” he said. “If I stick to my fundamentals and do what I need to technically, the outcome is normally pretty good for me.”

He has been kicking football since he was three years old and thinking about that calms him when it is his time to kick.

“I want to give this team a chance to win and be successful every time I step on the field,” Severino said. “My main focus is to compete every single day and be on that field helping Eastern Illinois football. It’s simple.”

It is just one kick at a time for him.