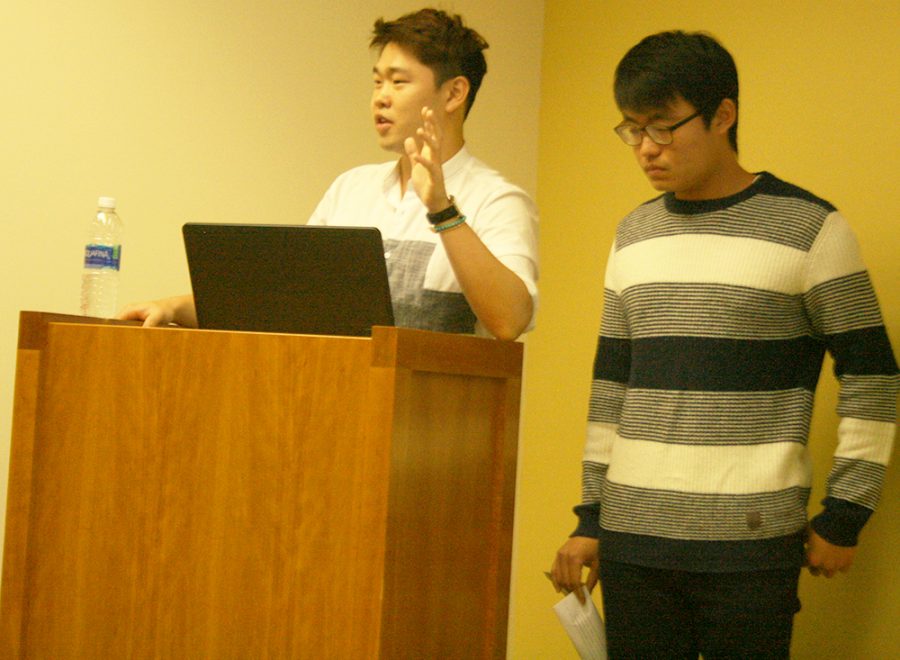 Sungkwan Park, (left,) president of the Korean Student Association and Seonghwan Kim, secretary of the Korean Student Association, give their presentations on the issues between North Korea and both South Korea and the U.S. at a talk called ”Dotard" vs "Little Rocket Man": Risks and Stakes in the U.S.-North Korea Confrontation" on Friday afternoon in room 4440 of the Booth Library.

History and modern-day politics collided at a panel discussion on the issues facing America and South Korea as a result of recent North Korean missile tests.

Sungkwan Park, president of the Korean Student Association, said to a certain extent, what is happening in North Korea does concern him.

“It’s happening right now, it will happen in the future,” he said.

In his presentation, Park said North Korea wants to have nuclear weapons for two reasons: offense and defense.

“North Korea is not actually aiming missiles at the U.S.A.,” Park said. “They are aiming at South Korea.”

Park said the reason for this is to show America that North Korea has the capability and technology to do so.

History professor Jinhee Lee, also the Asian studies coordinator, said from the very beginning, there has been a tricky relationship between American policymakers and the rest of the North Korean population.

Korea was divided into two sections, the North and South, in 1945 following World War II.

One of the most powerful pieces of rhetoric North Korea uses today is that it is outside imperialists’ fault that North and South Korea cannot reunify peacefully, Lee said.

“The reunification of Korea is a world-size issue,” Lee said. “It’s not really up to the Korean people, though Koreans want to take it in that way.”

There are generational differences between how people think about North Korea, America and about the reunification of the two Koreas.

“Is it better for us? Is it too burdensome? What is the best way to go?” Lee said. “Depending on which generation answers might vary.”

While Park’s family and friends back home have said the reunification of North and South Korea should be the goal, he sees it both ways.

Lee said this topic has popped up more in the media, though the rhetoric does not give the issue  much of a historical context.

Instead, some see it as a matter of “two madmen” quarreling with each other and giving each other “interesting” labels, with Trump calling Kim Jong Un a “little rocket man” after Un called him a “dotard,” she said.

“These are the words that they actually used in official statements,” Lee said. “No other government official, top government leaders, (have used) words or twitter in such a manner.”

Park said when they see in the media that another nuclear missile has been tested, other countries can feel threatened. “Once they feel insecure, they try to manipulate people,” Park said.

Seonghwan Kim, the secretary of the Korean Student Association, was a soldier in the South Korean military two years ago.

All able-bodied men of legal age in Korea have to complete military service.

Kim said while in the military, he was taught and trained how to fight North Korea.

“My friends are also in the military service, they do not like North Korea nowadays,” he said.

However, Kim said in his opinion, the problem can be solved peacefully.

While preparing for his presentation, he asked his friends of a similar age what they think of the situation.

When some students in South Korea see that North Korea is testing its missiles, Kim said they feel insecure about the area, as North Korea and South Korea are not that far away from each other.

Others are not surprised when North Korea does this, Kim said.

“They feel, oh, they did the test again these days,” Kim said. “But what I feel is quite different.”

Kim said the use of missiles is not the right thing to do.

History professor Ed Wehrle said with a new president just elected in the U.S. who is “clearly an edgy personality” who ran promising to get tough, the world is already in a chaotic state.

“Now, we’re faced with issue in North Korea,” he said. “We’re worried about a number of things happening. One could be some kind of an incident that could set up a nuclear war.”

Former President Richard Nixon dealt with a similar situation when he was challenged in North Korea, but he chose to use restraint in this instance.

Wehrle said the expectations inevitably shifts these days, though.

“We’re hearing a lot of ugly talk from both sides,” he said.