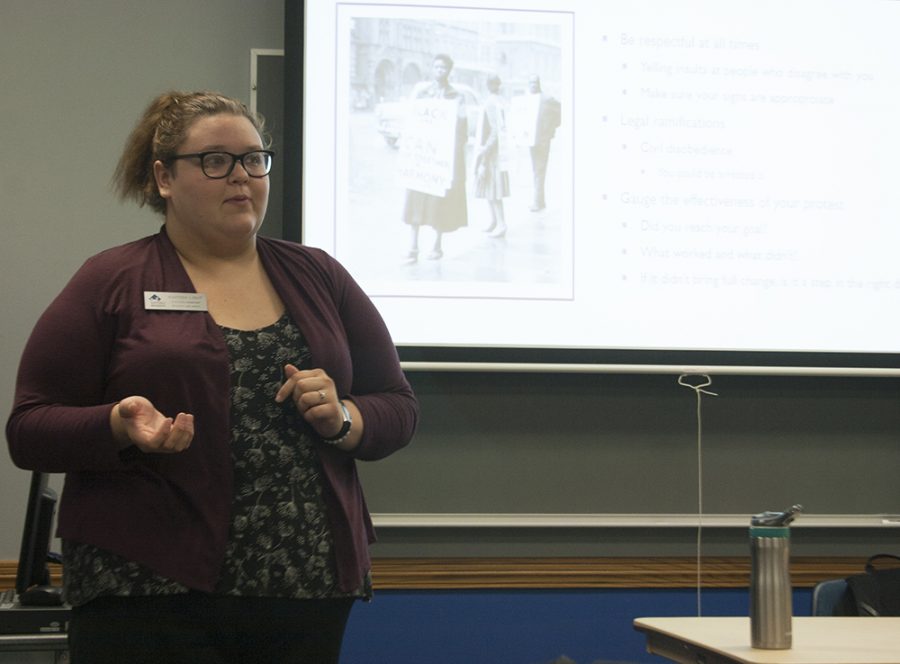 Karissa Light, an intern with the Center for Gender and Sexual Diversity, teaches students how to be an activist for various causes at Activism 101 Wednesday night in the Martinsville Room of the Martin Luther King Jr. University Union.

Activism can take many forms, as students learned in Activism 101 on Wednesday.

Karissa Light, an intern for the Center for Gender and Sexual Diversity, gave the presentation and spoke on six different topics of being an activist.

Light said another form of activism, protesting, is increasing on college campuses. She said an important part of a properly organized protest is behaving in a professional manner.

“First you want to set a goal, what do you want to see change and figuring out your target audience is the first step,” Light said.

Light then discussed on how to reserve a space for a protest. She said knowing your rights and figuring out what a primetime for your target audience would be are important factors in organizing it effectively. Social media campaigns can connect with protests to get the word out Light said.

She said contacting politicians about contentious policies happening in government is another way of being an activist.

“There are a variety of different ways to contact your politicians, you can write them a letter, call them, fax them or email them, ” Light said.

Light, also said a way to contact them is through Resistbot, which allows people to message local politicians to express oppositions to government policies.

Consumer boycott, which Light said is meant to show grievances and problems to different organizations by not supporting them or buying their products, is another way to be an activist.

“The biggest is the NFL boycott and people from both sides are doing it,” Light said.

After the presentation, Light showed two different case studies and got feedback from the audience on how they would handle certain situations in being an activist.

Light said that activism is important because in today’s political climate, some students can learn how to be positive activist.

“This event came about because students on campus are starting to become more activist.” Light said.

She said most of her research came from experience and learning from prior activist demonstrations.

Mallorie Fonseca, graduate student for college student affairs, said she learned different ways of becoming an activist and it is important for students to be informed.

“We have a lot of students on campus that would like to protest and make a stand, with everything going on in the community and the entire U.S., so it is important to get this info out so they know how to protest and their rights,” Fonseca said.

Amanda Mead, graduate student in counseling, said activism is becoming of increasing importance in light of the current political climate.

“I think being a student on campus, should I ever want to take part in protesting, I want to make sure I can go about it in the correct way so no one gets in trouble,” Mead said.