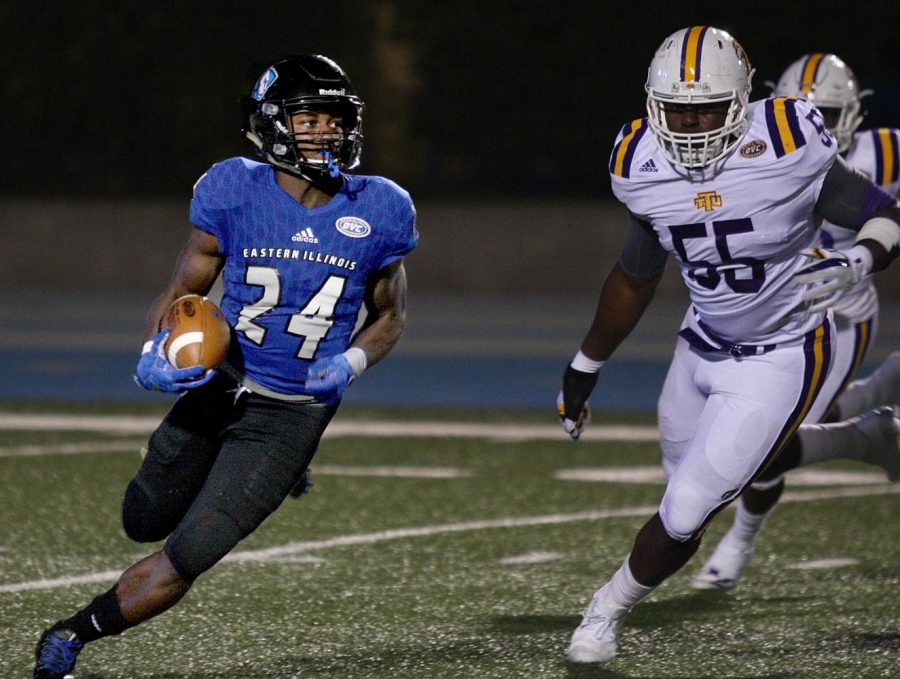 Sophomore Darshon McCullough breaks a run to the right for 70 yards during Saturday’s game against Tennessee Tech. The run set up a field goal before the first half ended.

As the race in the Ohio Valley Conference continues to heat up, it is the Eastern football team that remains on top.

With three straight wins, the Panthers are the team to beat right now along with 2-0 Jacksonville State.

Just three weeks into the conference schedule, those are the only two undefeated teams left in the OVC with Austin Peay, Murray State and Southeast Missouri right behind with one loss each.

While Eastern rung off another nail-biting win against Tennessee Tech this past weekend, Jacksonville State earned its fourth win overall and second in the OVC with a 34-14 route over Austin Peay.

The Gamecocks are also on a three-game winning streak with their only loss coming to FBS-opponent Georgia Tech.

Their opponent from this week, Austin Peay, ranks third in the OVC despite the loss.

The Governors’ defense has proved to be its backbone as their two conference wins have come by allowing just seven points combined against Tennessee-Martin and Murray State.

Their loss against Jacksonville State does not come as too much of a surprise, as not many teams in the OVC will be able to contain the Gamecocks’ attack.

Murray State is tied with Southeast Missouri for third in the conference after escaping against Tennessee-Martin with a 13-10 win.

That win was enough to also stop a four-game losing streak, but their schedule has arguably been one of the toughest in the OVC, with games against Louisville and Missouri State.

Southeast Missouri may not be expected to factor into the pact of conference contenders, but the Redhawks did enough to earn a 29-10 victory over Eastern Kentucky.

It also marked the end to a seven-game losing streak dating back to last season.

While it is still early, the middle of the conference belongs to Tennessee-Martin, Eastern Kentucky and even formerly ranked Tennessee State.

Those three teams come out of this week of action with a 1-2 record, but Tennessee State and Tennessee- Martin may find themselves atop the conference near season’s end.

The two teams have already played this season and Tennessee State’s defense continued its season of struggles in a 31-16 loss two weeks ago.

Tennessee Tech falls dead last among the OVC after yet another loss, as that one-point loss to Eastern dropped them to 0-3 in the conference and 0-6 overall.

The non-conference schedule has affected some teams as Eastern joins Jacksonville State and Tennessee State as the only teams with four wins overall this season.

As far as the rest of Eastern’s conference schedule goes, things do not get much easier.

The Panthers have had one of the easier schedules in the conference so far, but that is about to change with third place Murray State set for this week in Kentucky.

That can be seen as a must win for Eastern as a matchup against OVC-favorite Jacksonville State looms the week after.

Maher Kawash can be reached at