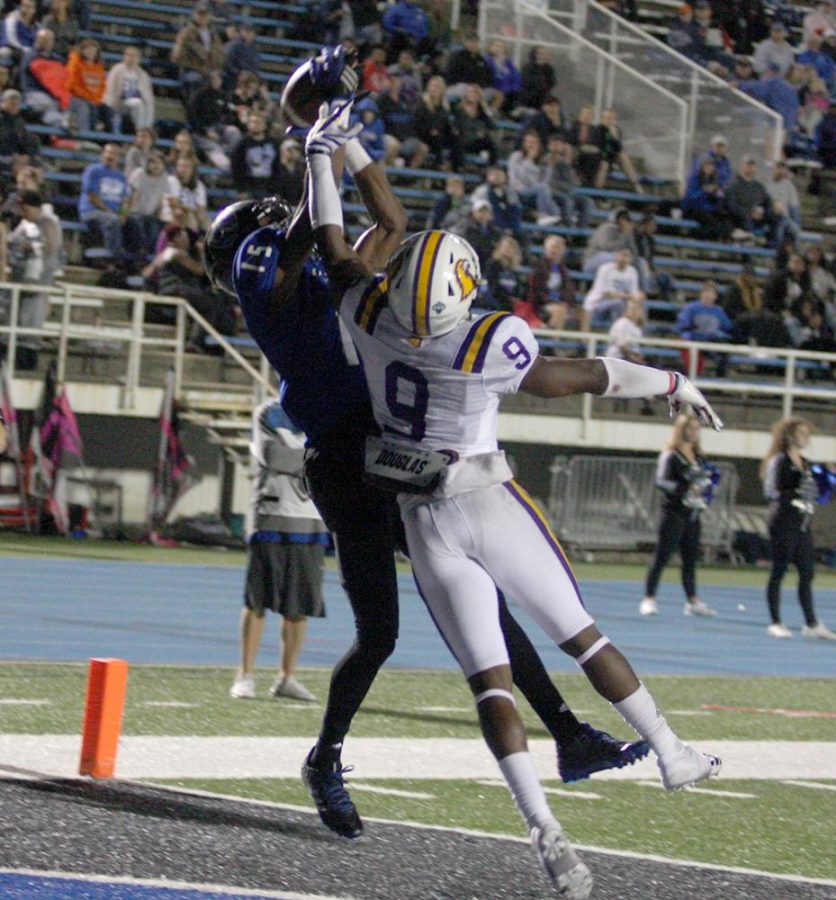 Junior receiver Alexander Hollins goes up and catches the pass from Bud Martin for a touchdown in the Panthers’ 24-23 win. Hollins had three touchdowns.

There is a saying out there that says to be a good team in any sport you have to have a little bit of luck.

Well, the Eastern football team is certainly exhausting all of its luck in what has been an impressive start to Ohio Valley Conference play.

No one can take anything away from the Panthers 3-0 start in the OVC, but it is fair to say their last second wins may make it difficult to be contenders.

For now though, that luck and second-half grit has been plenty to not only give Eastern a 24-23 victory over Tennessee Tech, but it gives them a solid shot at being a major contender in the conference.

The missed kick from Tennessee Tech to end the game Saturday night is some of that luck that Eastern has used to get to this point.

What is impressive is how consistently lucky the Panthers have been while putting in some solid play on both sides of the ball in the stretch of this three-game winning streak.

But as many people know, all good things come to an end, so Eastern coach Kim Dameron is aware his team needs to be prepared when the luck does run out.

Dameron said the Panthers’ luck will run out at some point, but the team’s ability to finish strong in the final moments of recent games is something special that not all teams possess.

Eastern has always followed the motto of “bend don’t break” when it comes to limiting teams defensively, and that was apparent in the final drive of the game which led to that missed field goal from Tennessee Tech.

Another fine example was the first game of this season when the Panthers took down Indiana State on the road with the help of a soaring touchdown connection from Mitch Kimble to Dennis Turner to end the game.

The clutch performances do not end there as a double overtime affair with Tennessee State on the road was a big momentum booster for this team with Scotty Gilkey Jr. pounding it in for that 19-16 win.

While Eastern has done a fine job to this point to bounce back from an inconsistent start to the season, it is clear what problems remain for the team.

For one, the quarterback situation is a mess despite the success that has come from the bench with Gilkey Jr. and Bud Martin after the Kimble injury.

Gilkey Jr.’s struggles early on against Tennessee Tech were enough to give Martin, the third-string quarterback, a chance to lead Eastern to victory.

And he did just that with an emphatic second half performance, but now that leaves some question as to what quarterback will continue to lead this team.

Along with that, the Panthers still have not seen the strongest of competition when it comes to the Ohio Valley Conference.

Eastern had to face some elite teams such as Northern Illinois and Illinois State, but other than that, two of the Panthers’ last three wins have come against opponents who did not have a single win on the year when Eastern played them..

But on the other hand, there is plenty of room for optimism because of the performance turned in against a ranked Tennessee State team on the road as well as the fact that this team has proven to be clutch when it matters most.