Martin, Hollins have huge second half in win 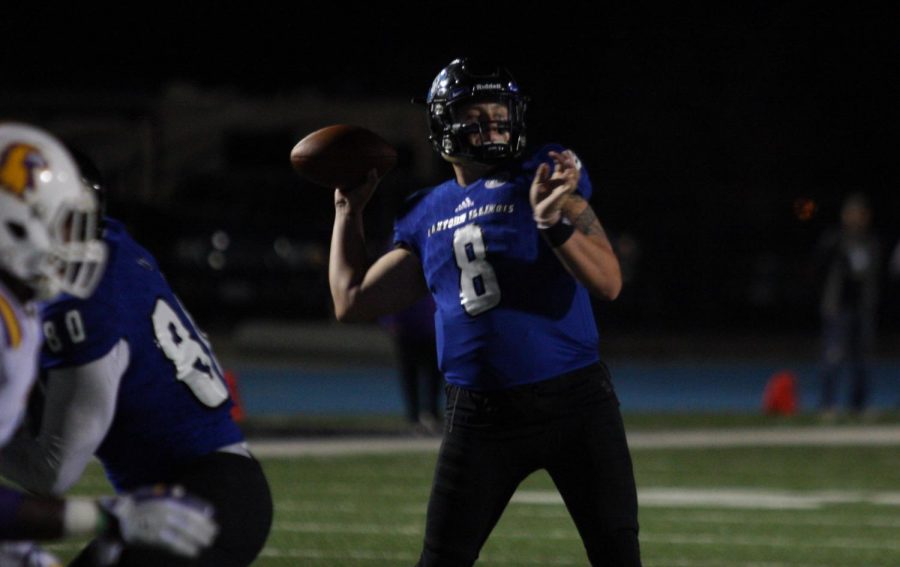 Redshirt junior quarterback Bud Martin watched the first half from the sideline as Scotty Gilkey Jr. played quarterback. In the second half, he threw for 204 yards, three touchdowns and brought the Panthers back to win 24-23.

Eastern moved to 3-0 in Ohio Valley Conference play, and also it is the third-straight game it came down to the final play. Tennessee Tech’s kicker Nick Madonia missed a 48-yard missed a field goal with 10 seconds left.

He connected on a 51-yard field goal earlier in the game.

But Saturday night at O’Brien Field, it was all about Martin and junior wide receiver Alexander Hollins. He connected with Hollins for three touchdowns. They connected for a 43-yard strike where Martin found Hollins wide open down field.

The other two touchdowns? Two great passes on fades in the end zone.

Hollins is the first Panther receiver to catch three touchdown passes since Adam Drake Nov. 1 2014. That was also against Tennessee Tech.

Martin and Hollins both admitted Hollins did not even know the play on his second touchdown.

“I knew Bud was in, I just figured it was a fade route, because Bud loves to throw fade routes,” Hollins said. “I just went up to the line and went up and got it.”

Martin had not seen much playing time in his career at Eastern, but in a 14-3 game, Martin was ready to go.

“I was just trying to be ready for the moment,” Martin said. “That’s where all the preparation comes in usually during the week.”

“I told him if you stay patient, stay positive and keep working your fanny off, good things happen and when you get your opportunity, you’re prepared and he was and I’m really proud of Bud for that,” Dameron said.

Tennessee State opened the scoring with a touchdown on its first drive of the game. The Golden Eagles went 72 yards on 7 plays for the score. Six minutes later, they scored again. And against it an Eastern defense that has been so strong all year, it was surprising.

But the second half, the defense was back to its usual self and held the Golden Eagles to three field goals and kept them out of the end zone.

The Panthers are enjoying the wins and always put the previous games in the rearview mirror, but they do want to try and get away from the down-to-the-wire games.

Eastern plays on the road at Murray State next week.