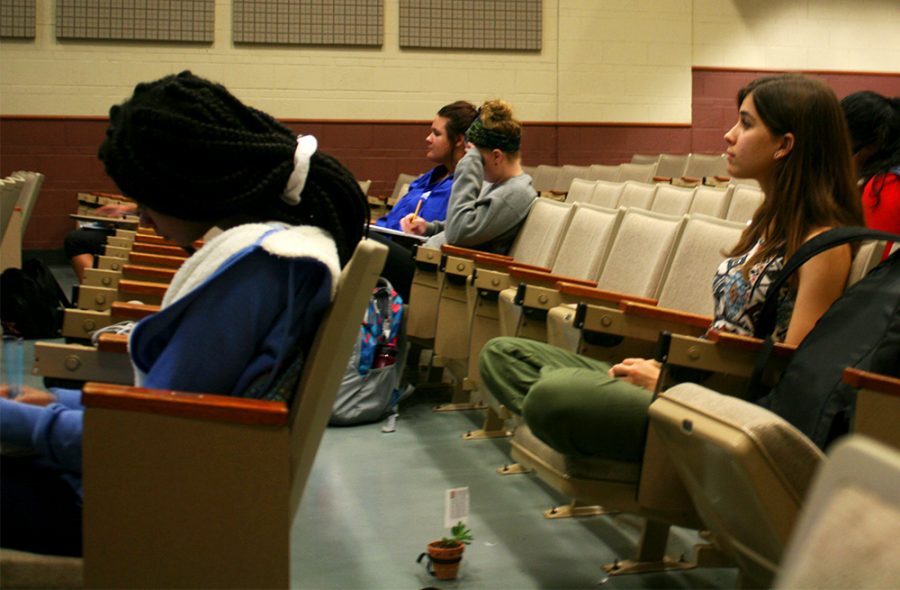 Students sit and watch "Stolen Education," which is a documentary, Thursday afternoon in the Buzzard Hall Auditorium. The documentary is about a school system that mistreated some of their Mexican-American students and was shown as part of the list of events for Latino Heritage Month.

Few students and faculty gathered in the Buzzard Hall auditorium for the screening of “Stolen Education,” a documentary film featuring the lawsuit filed by the families of eight Mexican-American students and the students against the Driscoll Consolidated Independent School District in Texas in 1956.

Jasmine Richardson, a freshman psychology major, said she came into the screening to learn more about the Latino culture during Latino Heritage Month.

“Yes, (to) better understand what (Mexican-Americans) went through,” Richardson said. “Things I do not know, so good to learn now.”

Amanda Travaglio, a senior history major, said the documentary will impact her in providing better knowledge of what Mexican-Americans face.

“Just realizing how much of a challenge it is for minority groups,” Travaglio said.

The film “Stolen Education” touches on topics of discrimination and segregation in schools directed toward minorities like Mexican-Americans.

Emily Guerrero, a freshman nursing major, said the documentary would not provide more understanding of what Mexican-Americans went through because she comes from that background.

“To be honest, back home (discrimination) was an issue in my community college, since a lot less Mexicans,” Guerrero said.

Travaglio said she feels education for minorities is still a problem in society, since parents of minorities might not have well-paying jobs to afford their children’s school.

“Just affording going to school is a struggle (for minorities),” Travaglio said.

Richardson said minorities in society today are treated with disrespect because of their nationality.

“(People) will look at (minorities) a certain way because of how society is today with looking at race and everything,” Richardson said.

Travaglio said overall the documentary will be a chance to learn about something different about minority groups.

“I think (minorities at Eastern) are represented very well.”

Richardson said having more documentaries like “Stolen Education” would be beneficial to showing how Latinos do not have a lot of opportunities.

“Open up eyes to not treat everybody different,” Richardson said.