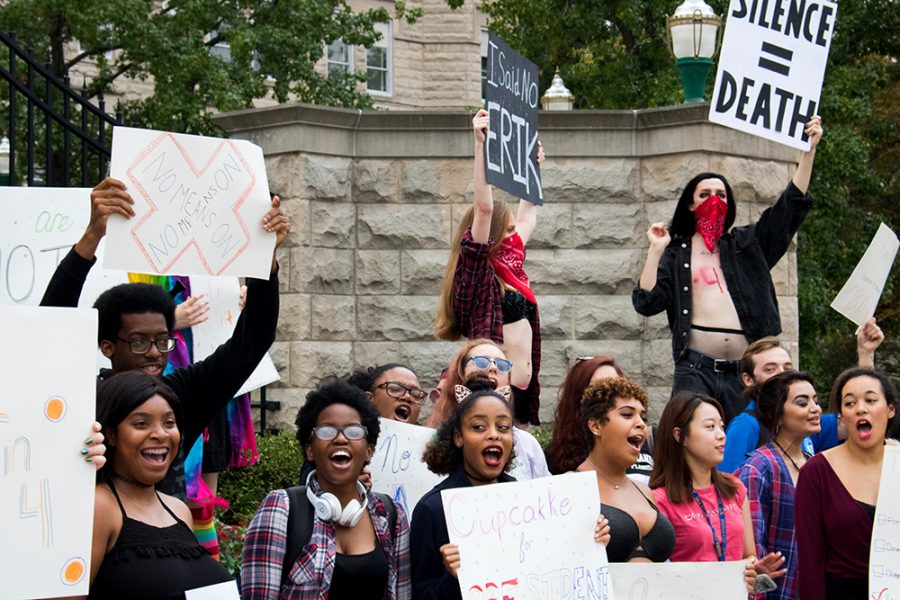 Students stand outside of Old Main at the 5th annual S.L.U.T Walk Wednesday afternoon. President of EIU Pride Siobhan Doherty said, the most empowering thing about this march is, seeing the look on people’s faces as they drive by; and forcing people to acknowledge a problem they don’t see often.

The S.L.U.T. Walk, which stands for Satirically Lessening Unfair Theories, began when a Toronto police officer told women that they should “avoid dressing like sluts” in order to prevent sexual violence.

EIU FEM president Alana Reinhardt said organizing the S.L.U.T. Walk this year was not too much of a challenge, because everyone involved really helped by spreading word of the walk.

“It’s our fifth year doing it, so we sort of know what works as far as where our route is around campus and what’s most effective,” Reinhardt said. “It’s great to have a gathering community, and everyone’s super supportive.”

Reinhardt said even people who are not members of EIU FEM recognize the movement and name of the walk. She attributed this to social media influences such as Amber Rose, who initially began the S.L.U.T. Walk after the incident in Toronto.

After the participants arrived, Reinhardt gave a speech about the history of the S.L.U.T. Walk and what the main idea of the walk is.

“Today, we call for an end to rape culture on our campus and beyond,” Reinhardt said. “We demand that victim blaming be abolished and that victims get the justice and respect that they deserve.”

Reinhardt said the reasons for the walk should be easy to understand, but continue to be a problem in society.

Reinhardt said for her, the walk meant solidarity and empowerment, and continues to be a great opportunity to speak up for those who often go unheard.

“It gives a voice to those who are often silenced by society and their attackers,” Reinhardt said.

Participants walked from Coleman to Old Main, chanting mantras such as “whatever we wear, wherever we go, yes means yes, and no means no” and “we demand the right to walk the streets at night.”

Some of the signs featured the number for the rape crisis hotline, as well as sayings such as “No means no” and “Consent is required.”

In front of Old Main, the group took pictures and stayed to do a few chants before walking down 4th street and back to Coleman Hall.

Kirsten Daugherty, a freshman psychology major, said she was very glad to get the chance to participate in the walk.

“I feel empowered, happy, I’ve got adrenaline and I’m sweaty,” Daugherty said. “I didn’t know if it was going to be a very big group, but it was a much bigger group than I expected.”

Daugherty said the walk reminded her of a quote that FEM adviser Jeannie Ludlow said in one of her previous classes: “Remove the barriers for her equality before you try to open the door to her.”

Reinhardt said she was happy and proud that the Fem Club could host this on Eastern’s campus, and the support from everyone was fantastic.

“I think it’s great, especially in the political climate we are in right now,” Reinhardt said. “To be able to use our free speech on our campus and make our voices heard is a huge right we’re happy to be able to practice.”