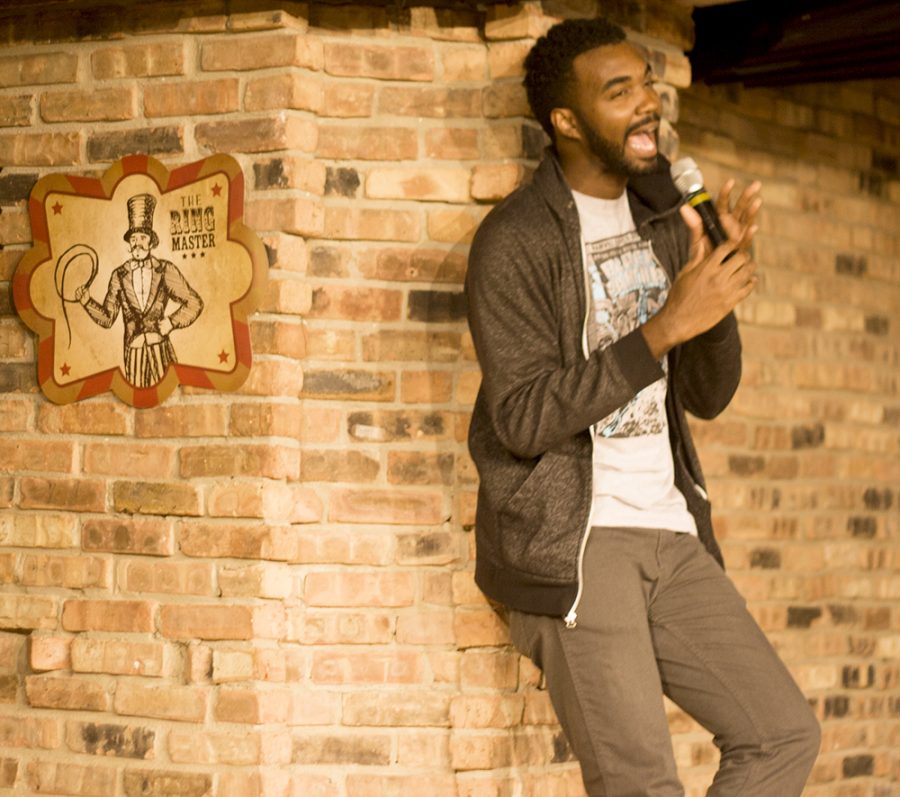 Comedian Lafayette Wright entertains a crowd Thursday night at the 7th Street Underground in the Martin Luther King Jr. University Union. Wright said this is his first time here and would gladly come back. Wright also said that this was one of the better crowds he has seen.

Wright, who has been doing comedy for 13 years, said the crowd was responsive, encouraging and overall great throughout the night.

It was Wright’s first time performing at Eastern, and he was accepted by a large round of applause when he took the stage.

“I got into comedy because I didn’t know what else to do with my life,” he said.

Jordan Jackson, a junior biological sciences major, said this was one of her first stand-up comedy experiences.

“The only other time I’ve been to one was my friend’s birthday back home,” Jackson said.

Before the routine began, Jackson said she did not know what to expect, but she was excited to see what Wright was going to do.

“He’s a comedian, so if I laugh even two times I consider it a good show,” Jackson said.

The skits in Wright’s comedy routine included issues about dating and critiques of scary movies, as well as a variety of other topics.

After the performance, Jackson said she wished it would have lasted longer than it did.

“I didn’t necessarily have a favorite part, but was super good. Plus I laughed way more than two times,” Jackson said.

At many points during the routine, Wright had to pause after his jokes to let the laughter die down.

Jackson said Wright did well touching on modern topics such as racial issues in society and some controversial subjects.

“He stayed away from politics, which was good because I feel like every comedian right now is doing political stuff in their shows,” Jackson said.

Dallas Lancenese, a junior business management major and the University Board comedy coordinator, said he was really happy with the turnout, especially for a Thursday night.

“Anyone can watch a video on the internet of any comedian in their room,” Lancenese said. “It’s a different atmosphere when you go out and see someone live.”

Each month, Lancenese tries to get a comedian to come to Eastern to perform at the 7th Street Underground.

“When I was young, I never really got the chance to see a comedian live, but I got that opportunity at Eastern … That’s why I applied to this position,” Lancenese said.