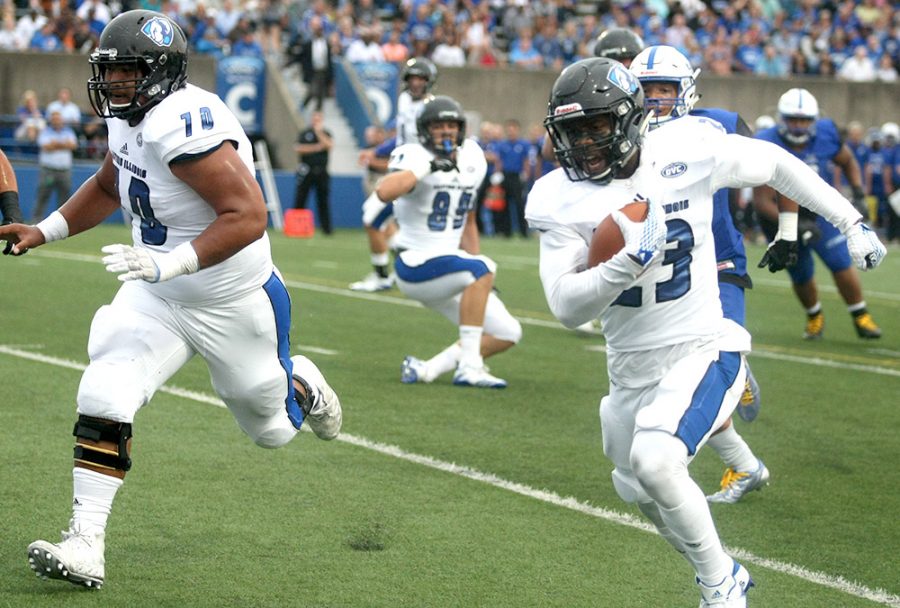 Junior running back Isaiah Johnson rushes in a touchdown against Indiana State Aug. 31 in Terre Haute. Eastern hosts Tennessee Tech this weekend for the Hall of Fame game.

Three teams in the Ohio Valley Conference remain heading into the third week of conference play and the Eastern football team is one of them.

Austin Peay has begun a turn-around season starting 2-0, picking up its first and second wins since the seventh game of the 2014 season.

The Governors won their season opener, which resulted in the fans celebrating and bringing down the goal posts. Austin Peay had the goal posts ready for its next home game. The Governors have picked up back-to-back wins against Tennessee-Martin and Murray State.

It is safe to say that Austin Peay and its fans are playing with a bit of energy and a so-called monkey off its back.

The Governors may have won on Saturday against Tennessee-Martin, but it was only by 7-0. The defense held strong and allowed just 291 yards to the Skyhawks. They did, however, beat Murray State 27-7.

The 7-0 win does not speak much about how the game went, whether it was poor offense, or great Austin Peay defense, and in reality, good Tennessee-Martin defense as well. But the Governors have another thing to celebrate as it was their first shutout since 2012 and first against a Division I opponent since 1986.

Austin Peay struggled for years, but now it is a team that can actually be feared among the OVC. Even though it is early and the Governors do not have a great history to talk about or look at, this year has shown a different monster.

The Governors are playing on adrenaline after finally cracking the win column and only has them hungry for more.

They will be on the road this weekend against Jacksonville State, the other undefeated team in the OVC. The Gamecocks have only played one OVC game.

Jacksonville State won last weekend against Tennessee Tech, the team that Eastern hosts this weekend for its Hall of Fame game.

The Gamecocks won big over Tennessee Tech 34-7 last weekend. Even without their start quarterback Eli Jenkins, the Gamecocks still put together 523 yards of total offense. Jacksonville State is No. 4 in the FCS top 25 this week.

Eastern has not had a game with that explosive of an offense, so a 500-plus-yard game against the Golden Eagles should not be expected.

The Panthers have improved their offense the past two weeks, using redshirt freshman quarterback Scotty Gilkey Jr.’s running ability to gain most of their yards.

He has given Eastern an energy boost after having two bad losses.

And while Eastern’s offense is starting to find its way and improving each week, the defense has continued to stand strong.

The defense has kept hard-fought games close, and close enough for Eastern’s offense to do just enough to win games.

The Panthers are coming off a double overtime win against Tennessee State on the road, which resulted in Gilkey Jr. and senior Nick Horne receiving OVC Player of the Week honors.

While those three teams have played well to start the OVC portion of their schedules, three teams are looking for their first wins of the season.

Murray State, Tennessee State and Tennessee Tech have yet to win a game.

Murray State has not played well in its last two games, especially. For the second-straight game, the Racers’ offense was held to under 100 yards.

The Racers lost to FBS Louisville 55-10.

This week is not only vital for the win-less teams to get back in the win column, but it can start shaping the OVC more and giving a better look at who is contenders and who is not.