UPD to expand use of ALICE 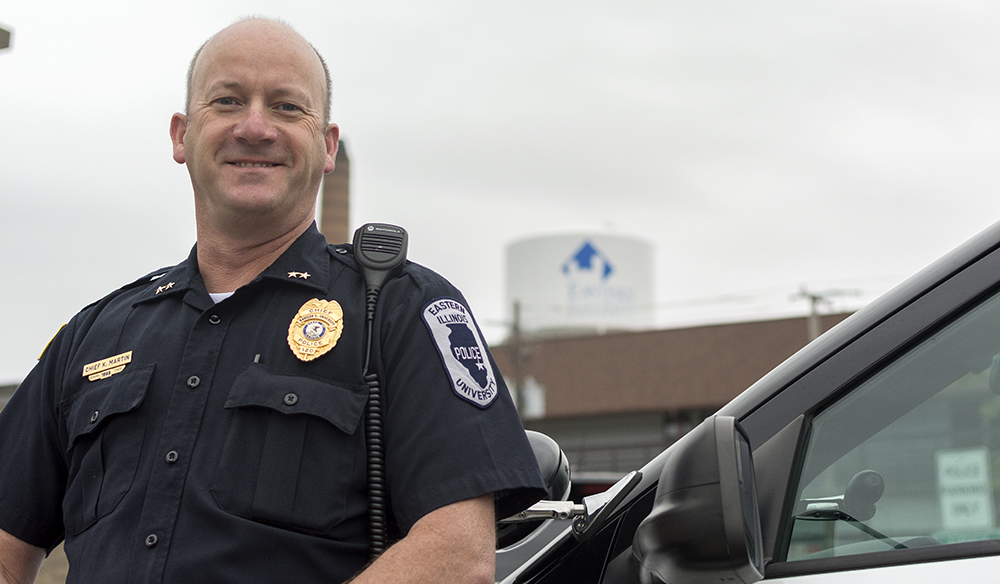 University Police Department Chief Kent Martin hopes to begin training of ALICE, an active shooter response program on the campus of Eastern. The program, according to its website is the No. 1 active shooter civilian response training for organizations. Martin said you does not have to look far to see the benefits of the program.

After becoming a certified ALICE trainer, University Police Chief Kent Martin now plans to expand the use of the program throughout the campus community.

ALICE is a training program that helps educate civilians on what to do in case of an active shooter. It is an acronym for Alert, Lockdown, Inform, Counter and Evacuate.

University Police Officer Tony Hoh said his 20 years of military experience before becoming a police officer provides him with a unique perspective on the importance of ALICE training.

“I’ve seen several instances in my life where things have gone sideways unexpectedly,” Hoh said. “Things could have gone a lot better had people been trained or were prepared.”

Hoh said his children mentioned the ALICE program to him after learning about it in their elementary school and high school.

“The funny thing was, this was something that as a military veteran before I knew anything about ALICE, this is what I was already telling my kids to do,” Hoh said.  “Quite frankly, I don’t care if your teacher says get underneath the desk and turn the lights off. You get out of that building and you run straight home and you do it right now. Those were the kinds of things I was telling my kids before I even knew anything about ALICE.”

While Hoh said he is excited to be an ALICE instructor, trying to make the program available to the entire campus creates challenges.

“We’re a large student body,” Hoh said. “I can’t hold a cafeteria assembly at noon and talk ALICE. Things are too far apart.”

When doing ALICE training, Hoh said he aims for the presentation to be specific enough that the advice is solid and people know the terms, but broad enough to apply in varying situations.

“It’s not a fun thing to do,” Hoh said. “You really kind of have to go back in that little dark part of your soul and touch yourself a little bit and think about, ‘If I was an active shooter and I was going to do this, what would I do?’”

To completely train people in ALICE, Hoh said the program takes two and a half to three hours. One way that has been suggested to shorten the time is to put the presentation online and do the practical application in person.

However, Hoh said not having himself and Martin in person for questions about the presentation would be a trade-off if this was the route chosen.

“He’s a wealth of knowledge on these kind of things,” Hoh said. “I’m newer as a police officer, but I kind of lean on what I learned in the military. We can answer your questions right then and there.”

Martin said educating the community on this program prevents members of the community from finding themselves in a real-life situation without a proper plan of what to do.

“We believe in (ALICE) so strongly. We want to make it available out here, not because we think something is going to happen on this campus, but just so people have this information and that information goes with you no matter where you go,” Martin said.

Martin said ALICE was applied successfully to save lives in the shooting at Mattoon High School, where one student opened fire in the cafeteria, shooting another student before he was subdued by teacher Angela McQueen.

Martin said the principles of ALICE can be used in an academic setting, a medical setting and even in an office building. He said because people can apply this almost anywhere they go, it is all the more important to get the word out about it, as it could possibly save lives.

“I am hoping to get this going fall semester, maybe in the spring semester, but definitely this school year if it’s at all possible,” Martin said.