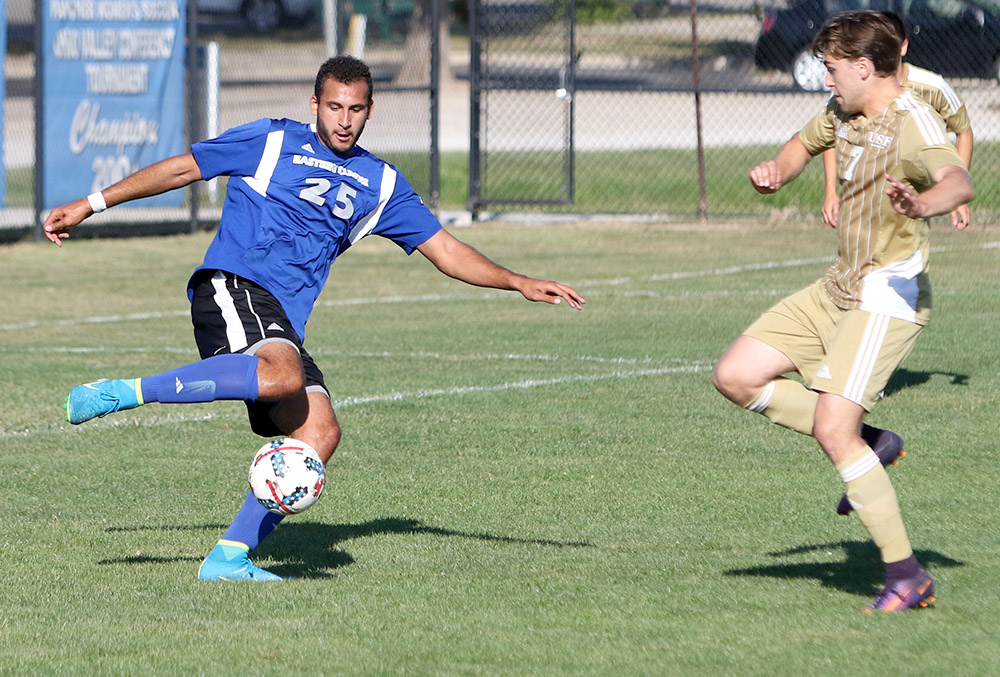 Freshman Shady Omar attempts to kick the ball away in the Panthers’ 1-0 win over Saint Francis Sept. 10 at Lakeside Field. The Panthers play at Western Saturday.

Eastern and its defense, which has five shutouts to its name this season, will face a scoring tandem from Western on Saturday in the form of the Summit League’s leading scorer Fernando Pacheco (six goals) and his counterpart Drew Whalen who is third in the conference with five goals.

The senior-junior attack of Pacheco and Whalen have accounted for 11 of the 13 goals scored by Western this season.

The pair will not be a new challenge to the Eastern defense, as two years ago Whalen was the Summit attacking player of the year and Pacheco is a returning senior who scored four goals last season.

“Western has always had attacking threats,” Eastern coach Kiki Lara said. “We just make the guys aware and we build our team with players that can neutralize that.”

“Western is always a gritty, hardworking and competitive team with a lot of experience in getting Summit Conference tournament births,” Lara said. “They have a lot of know how. So, we are just expecting them to be exactly what they have always been which is that.”

For Eastern, the game will be its second conference matchup in cross-state battle.

“I think it has to do more with conference play. The guys are built now to know that every conference match there is always an added perk with points on the line. With six teams in conference now it’s a battle,” Lara said.

Lara said there is not a weak team in the conference, while Omaha and Denver are in the top 10 in the region, the other teams in the Summit are capable of winning a match.

“So there is never an easy game, it’s very competitive and I think our guys get up for conference and they know what to expect,” Lara said.

Coming off a 0-0 tie with one of the top teams in the country in Omaha last weekend, Eastern is feeling like it can compete at a high level with any team right now.

“Confidence is high with our guy,” Lara said. “But again, confidence is a mind-set thing, it’s something that we work on every day with our guys, with our program.  So yeah I would say that at the moment confidence is high because our guys are playing well and they know it and we just have to keep progressing on both sides of the ball and specifically find ways to get aggressive and get forward and be positive so that we can find a goal or two on the weekend.”