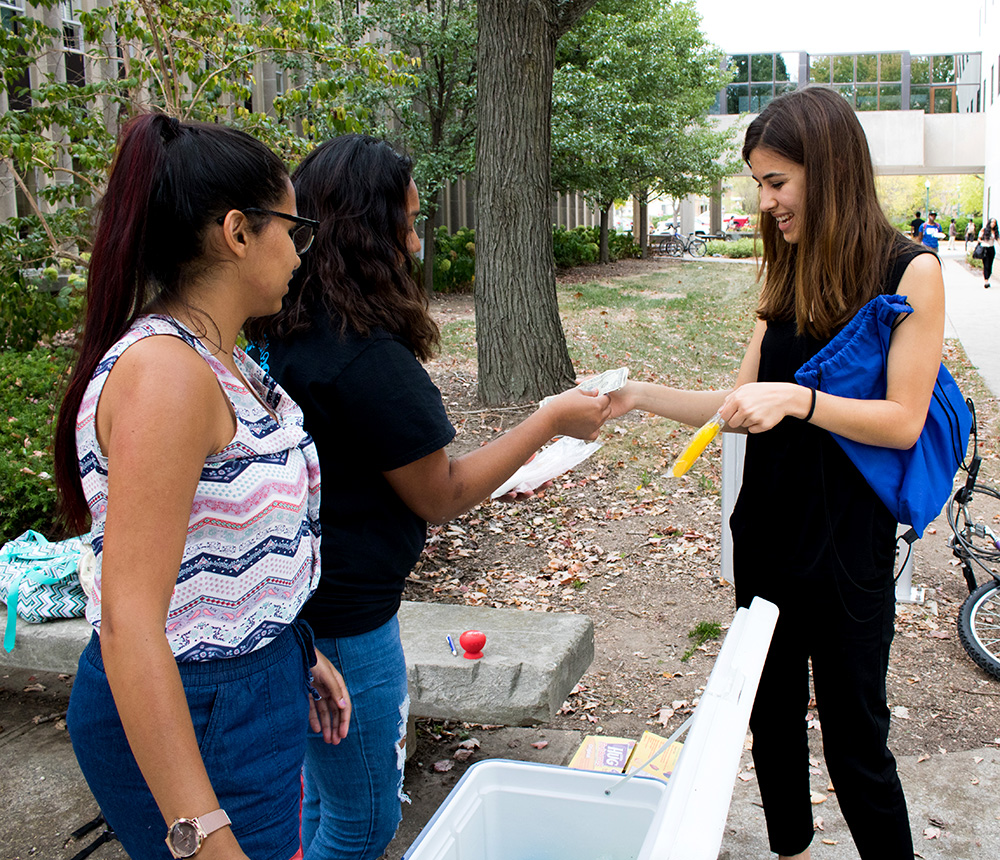 Melissa Martinez, (left), a junior chemistry major and Blanca Aragon, (middle) a senior community health major, serve paletas, or popsicles, to Pamela Padilla, a sophomore Spanish education major, outside Coleman Hal Wednesday afternoon. Martinez and Aragon are both part of the women’s empowerment registered student organization Esperanza. Esperanza raised just under $100 at the end of the sale. The money is going to help them run events in the future.

Along with popsicles, Esperanza, a registered student organization, brought childhood memories to campus with their Paletas Sale on Wednesday.

Esperanza’s president, Blanca Avagon, said the goal of the sale was to bring a little bit of home to Latino students on campus and to inform the campus community about what their organization stands for.

“No one’s ever thought of the idea so I was like, why not,” Avagon said.

Avagon said she has many fond memories of going to the park with her mother and getting paletas as a special treat.

“She was never big on sweets, but I remember just going to the park and asking for one of those and that would bring joy to my day,” Avagon said.

There were people waiting outside Coleman to buy the frozen treats before the group even set up Avagon said. It went so well she said she was considering it as a possible fundraiser for next semester.

“We can draw them in with the paletas and then give them more information about what our RSO stands for,” Avagon said.

Avagon said Esperanza was founded by five women from different multicultural backgrounds and was created to educate the community about women empowerment, diversity and culture.

“We’re trying to educate everyone little by little about the different cultures,” Avagon said.

Melissa Martinez, Esperanza’s special event coordinator who also handles public relations and marketing for the group, said she remembers paletas as an integral part of her elementary school experience.

“Every Friday that was like my reward for making it through the week,” Martinez said. “We would go to my grandma’s house and then my grandfather would drop my grandma off and then he’d take me and my older brother to the store.”

Martinez said this childhood routine has affected her tastes in frozen treats to this day.

It was wonderful to see people coming to the sale who were not necessarily of Hispanic descent because of how open they were to experiencing a culture different from their own, Martinez said.

“It’s really nice that people are open to experiencing our culture and what we find really special and something that is really important to us that they are able to receive it well and also enjoy it, because who doesn’t like ice cream,” she said.

All money raised by this sale will go toward funding future projects the group plans to do in the campus community.

Esperanza’s next project will be a breast cancer awareness T-shirt sale in October.