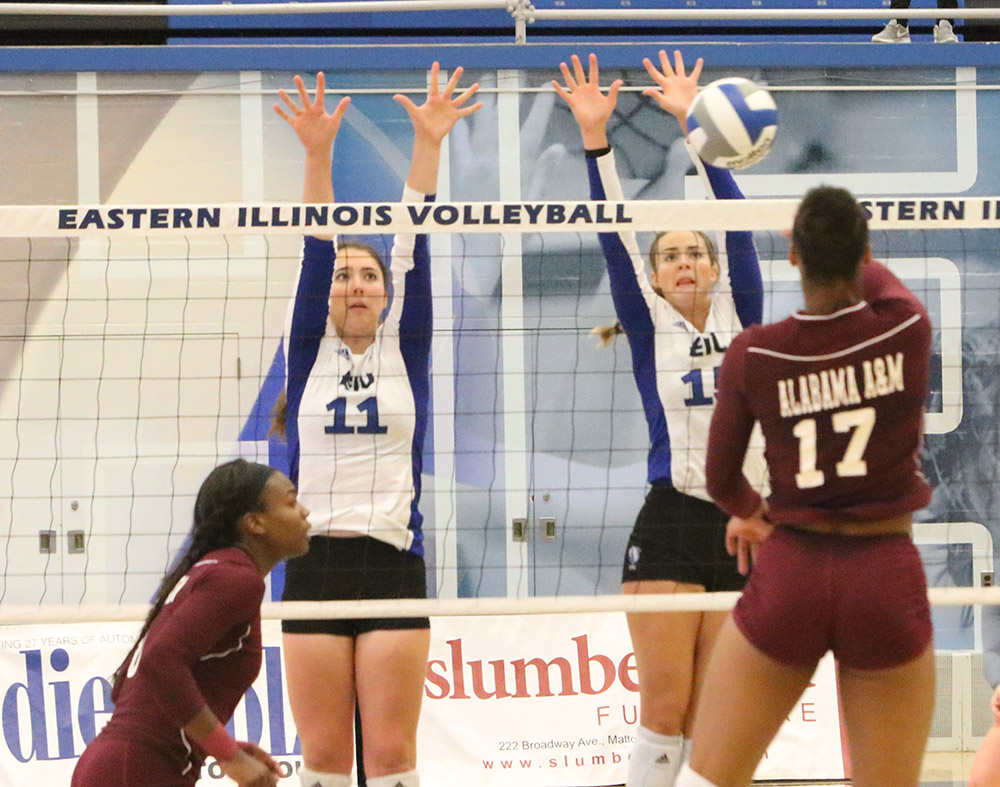 Eastern’s Abby Knight and Laurel Bailey jump up over the net to block a shot by an opponent from Alabama A&M on September 8th at Lantz Arena. Eastern won the match three sets to 0.

The Eastern volleyball team will get a taste of home Ohio Valley Conference action Wednesday when it hosts Southern Illinois-Edwardsville.

The Panthers got off to a rocky start in conference play, as they dropped matches against Murray State and Austin Peay last weekend.

Last weekend’s game play was neck-and-neck for both Eastern and SIUE. Junior setter Taylor Smith said keeping errors at a minimum was key to the close sets.

“I believe that all four sets were close because everyone really stepped up and dug balls, hit and set smart, and our serve receive did good as well. Overall, we had a pretty solid game with minimal errors,” Smith said.

The Cougars tallied stats similar to those of Eastern in each team’s matches against Murray State. The Panthers totaled 51 team kills while the Cougars posted 65. Edwardsville’s Ashley Witt notched a team high 17 kills, out hitting Eastern freshman outside hitter Laurel Bailey by four kills.

Witt will be a player to watch for. The outside hitter averages three kills per conference set for a hitting percentage of .205. Witt has also totaled 23 blocks so far this season and is a dominant force at the net for SIUE.

Eastern senior outside hitter Maria Brown currently has a season high kill total of 147 and averages nearly three kills per set as well. Brown edges Witt on season-high blocks at 27.

SIUE libero Katie Shashack is the center of a solid back row for the Cougars. Shashack earned a career-high 32 digs against Murray State. Shashack averages four digs per set and has recorded 56 assists on the season.

Eastern sophomore libero Anne Hughes returns this year as the anchor for the Panther’s back row. Hughes averages nearly five digs per set with a total of 257 on the season. Hughes has also earned 49 assists so far.

Smith said the teams’ similar styles of play will force the Panthers to pay attention to details.

“I think the biggest thing is that we stick to our game plan and pay attention to the small details,” Smith said. “If we make sure we are doing the little things correctly … there’s a good chance we will come away with a victory.”

Kills and blocks made a huge difference in last season’s match. SIUE totaled 47 kills to Eastern’s 24. The Cougars’ 10 blocks edged the Panthers by three.

Wednesday’s match will start at 6 p.m. in Lantz Arena. This match kicks off a four-match home stand for the Panthers as they will take on conference opponents Tennessee State, Southeast Missouri and Tennessee-Martin in the coming weeks.