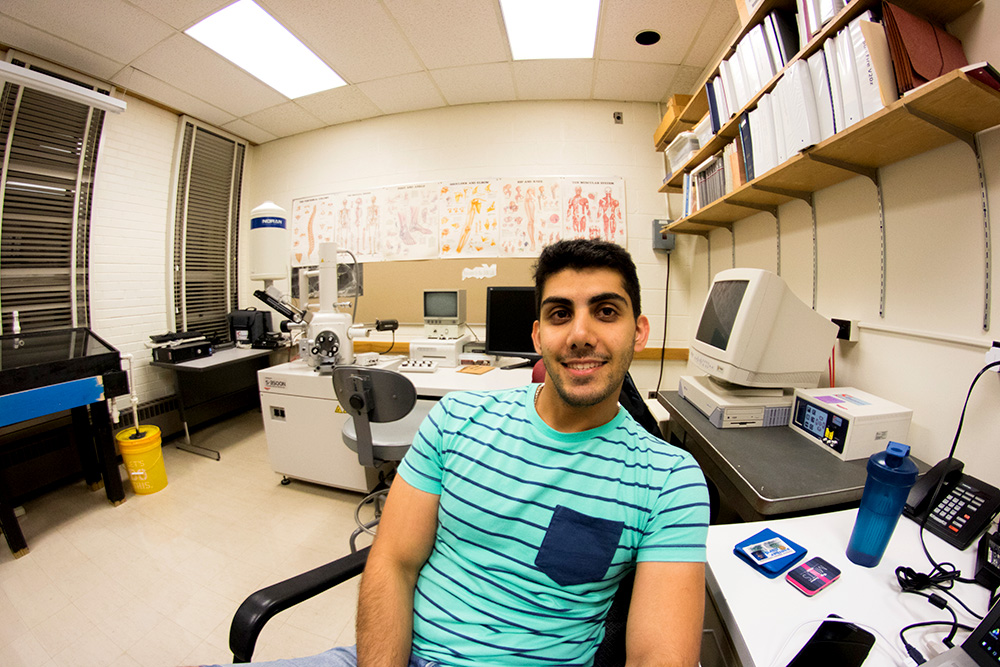 Max Maseri poses for a portrait in his office at Klehm hall Monday night.

This ban replaces Trump’s previous travel ban, which expired this weekend. New restrictions are set to kick in Oct. 18.

Travel from these countries will be suspended or will endure enhanced vetting processes.

Naseri said after Trump announced the ban Sunday night, he began to look at universities for a doctorate program and job availabilities in Canada, since he will receive his Master’s from Eastern in December.

It is really embarrassing that Iran is on the list of banned countries, Naseri said.

He said he pays for a lot of things in the U.S., such as taxes, gas, tuition and everything in between.

Many of Naseri’s friends in Iran who wanted to come to the U.S. for college have decided to go to Canada instead since Trump has been in office.

Brilliant minds from Iran, “geniuses” as Naseri called them, will not be able to take advantage of prestigious universities in the U.S. if this ban is put in place, he said.

One of Naseri’s Iranian friends got his doctorate from the University of Illinois Urbana-Champaign and interned with Google and Apple.

Naseri said if the ban is implemented for an extended amount of time, companies like this “cannot have geniuses from those countries.”

Trump does not think about the consequences of not having these people in the U.S., he added.

Naseri’s mother was in the United States seven or eight months ago, and his father visited a year ago for a couple months.

For Naseri’s father, the process of getting a visa took a long time.

When Naseri planned to come to the U.S. for college, he traveled to the nearest U.S. embassy in Turkey to be interviewed for his visa, since there is no embassy in Iran.

He said it took months just to get a 15-minute interview. In total, Naseri said it took roughly a year to get his student visa finalized.

Albert Maizel, a close friend to Naseri and student from Israel, said Naseri and his family mean no harm to the U.S.

Maizel said there are a lot of good people in Iran, and what the ban does is not allow them into the U.S.

“The government needs to create a better system,” Maizel said.

Naseri said he would like to see someone peaceful leading in the U.S., since it is a great country.

“We should stand with each other… make the world peaceful,” Naseri said.