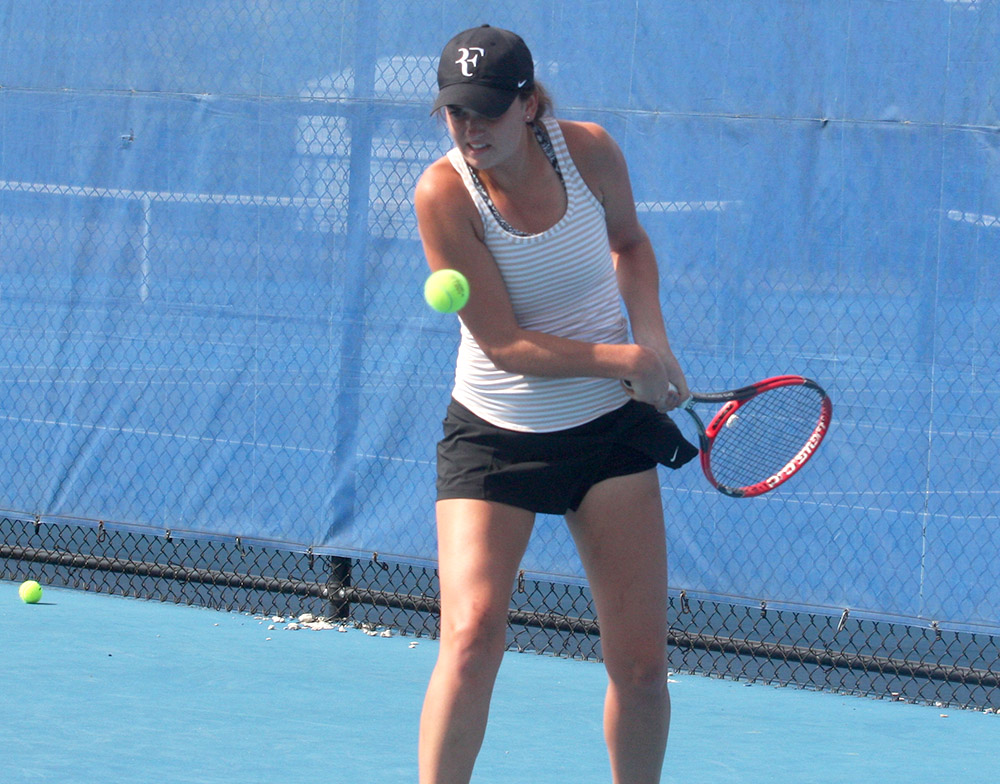 Junior Abby Carpenter backhands the ball to freshman Karla Contreras and sophomore Emily Pugachevsky at practice Thursday. Eastern is playing its fall season. Eastern just finished play over the weekend at the Bradley Fall Invitational and will have the EIU Alumni match Saturday.

Eastern’s women’s tennis team continued its fall season in Peoria over the weekend at the annual Bradley Fall invitational.

The Panthers found success at the event, especially from two of their freshmen.

Eastern was one of six teams to attend the invite. The other five universities in attendance were host team Bradley, DePaul, Northern, Illinois State and Western.

Freshman Rachel Papavasilopoulos advanced to the flight A championship, and technically remained undefeated in singles for the tournament.

Papavasilopoulos defeated Illinois State sophomore Jelena Vujicic in her opening round match Friday (6-4, 6-0). She also defeated DePaul freshman Lenka Antonijevic in a tie break in her semifinal match up (6-3, 7-6, [6]).

Although she advanced to the final of her bracket, Papavasilopoulos could not finish competition. The freshman had to withdraw from Sunday’s final against Bradley’s Sandra Maletin due to injury.

Papavasilopoulos wasn’t the only Panther freshman to achieve victory at Bradley.

Along with junior doubles partner Shristi Slaria, Claire Martin got the first wins of her Panther career over the weekend.

Martin and Slaria advanced to the flight championship with a win over the DePaul duo Alina Kuzmenkova and Milica Tesic 6-3 in the flight B doubles bracket.

This victory came after defeating ISU duo Laura Fitzgerald and Valerija Gercar to open doubles competition by another score of 6-3.

The duo ran out of steam in the championship round though, they were defeated in the flight final by the veteran Bradley duo of Alexa Brandt and Malini Wijesinghe.

Doubles flight B produced positive results for another Panther duo as well.

Doubles victories weren’t the only wins Slaria earned at Bradley. The junior finished in third for the flight B singles bracket with two wins over the weekend.

The win against Lubbers earned Slaria a third place finish for the flight.

Sophomore Stella Cliffe was the other Panther to earn a win in Peoria. Cliffe defeated Kuzmenkova, in a bit of a consolation match (6-0, 6-3).

The Panthers will be back in action this weekend. They will be at the Darling tennis courts in Charleston for EIU’s annual alumni match on Saturday.

Parker Valentine can be reached at