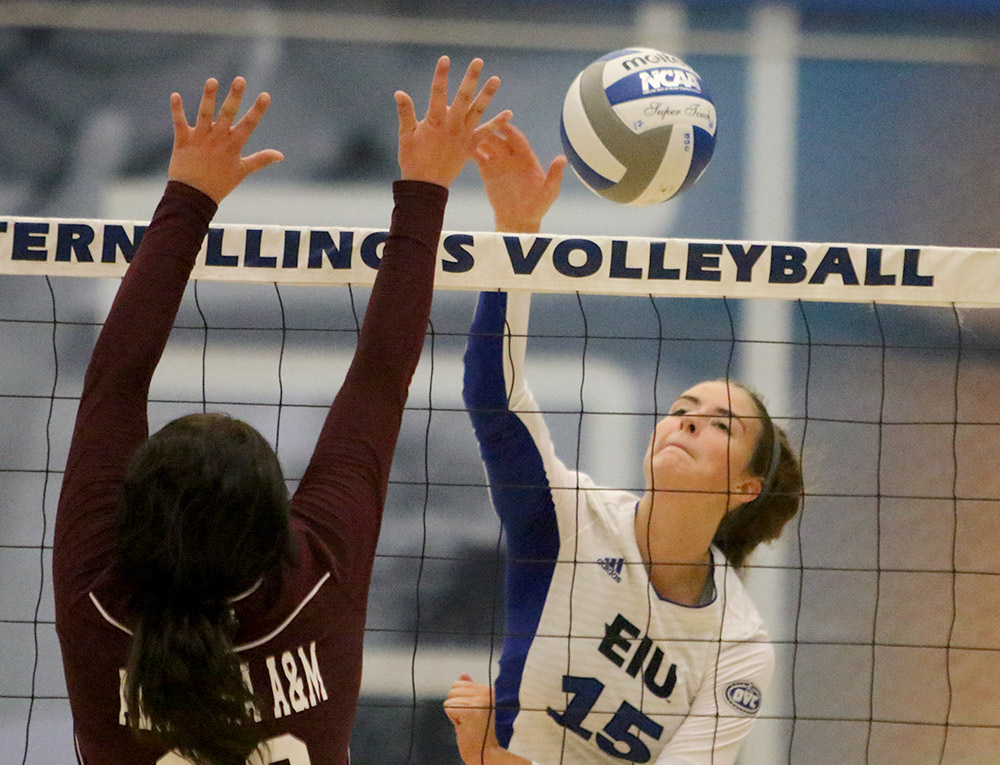 Freshman Laurel Bailey kills the ball in the Panthers 3-0 win over Alabama A&M Sept. 8 in Lantz Arena. Eastern lost both of its OVC matches this weekend on the road.

Each of the road matches was played to four sets with Eastern taking just one set victory on both Friday and Saturday. All four sets in Friday’s matchup against Murray State were close (25-23, 20-25, 18-25 and 23-25).

The Panthers continued to be big on blocks as they notched nine total blocks over the Racers’ five. Junior Taylor Smith collected six of those blocks for herself to lead the team.

Runs late in the first set propelled the Panthers to their only victory on the day. Freshman outside hitter Laurel Bailey lead the squad in kills with 13 on the day.

The grit and grind type of play coach Sam Wolinski predicted for the weekend matchups kept the Panthers in back-and-forth tug-of-wars throughout the game. The Racers’ Rachel Giustino was an offensive powerhouse for Murray State as she led the team with 21 kills and two service aces.

Neither team let much drop by way of serves as the most aces recorded on both sides of the net was two. Bailey earned two while senior outside hitter Maria Brown and sophomore libero Anne Hughes each recorded one. Murray State’s Giustino and Becca Fernandez tallied two a piece, and Megan Lindsay earned one.

The remaining sets were neck-and-neck, and the Panthers never let go of the intensity that fueled their first victory. The Racers now have a perfect conference record at 2-0, with their other win being over Southern Illinois Edwardsville.

The Panthers finished up weekend play at Austin Peay where the Governors won the four-set match (25-16, 10-25, 29-31, and 18-25). Eastern started the match on fire, holding the Governors to just 16 points. Austin Peay returned the favor in set two as the Panthers barely scored in double digits.

Eastern led the way on digs and aces this time around at 72 and six, respectively. Hughes tallied 24 digs to lead the team, and Brown had the most aces at two.

The Panthers did not go quietly in set three as they pushed to the Governors to win by two at 31-29. The third set harbored four lead changes before Austin Peay’s Christina White secured the set three victory with a kill.

Brown and Smith were the only Panthers to reach a double-double on the day. Brown recorded 10 kills and 12 digs, and Smith earned 17 assists and 14 digs.

The win puts the Governors at 2-0 in the conference, and the Panthers await an OVC win at 0-2.

The Panthers will get a taste of conference play on their home court come Wednesday when they will host Southern Illinois Edwardsville at 6 p.m.