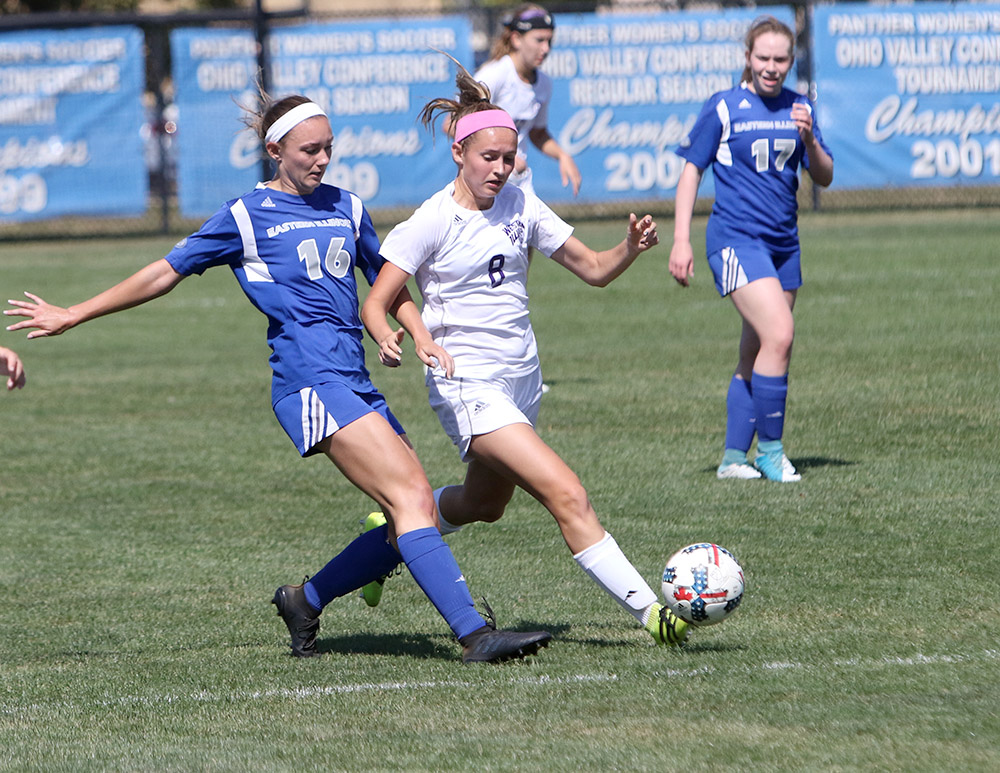 Junior Kayla Stolfa makes a pass to her teammate in the Panthers’ 2-1 win over Western Illinois Sept. 10 at Lakeside Field. The Panthers have lost four games in a row.

Things have gone from bad to worse for Eastern’s women’s soccer team in a matter of two weeks.

After losing both matches last weekend, the Panthers lost both of their matches this weekend against Belmont and Austin Peay, extending the team’s losing streak to four matches.

In what has quickly turned into a different narrative for the team, Eastern has been held scoreless in their last four matches, something that happened once before on Aug. 27 against Milwaukee. Since then, and before the losing streak, Eastern scored 12 goals in four games.

Before conference play, Eastern’s opponents had trouble keeping the Panthers out of their defense’s hair, but now, Eastern is having trouble finding the back of the net.

Three Eastern players have three goals each, and two players have two goals each. Three other Panthers have added a goal of their own. The Panthers did not have trouble moving the ball and getting offensive pressure on their opponents’ defenses before conference play started.

But in the four recent matches that make up the team’s losing streak, Eastern has had fewer shots on goal than it was used to earlier in the season: 22 total shots in the four matches with eight of them on goal.

The team’s defense has held tough in the four losses, but without the offense pressuring the other team more often the defense has been worn down, playing 90 minutes with constant pressure in their face.

The losses to Belmont and Austin Peay drop the Panthers’ record to 5-6-1 overall, with an 0-3 conference record and tied for last place in OVC standings with Jacksonville State (0-3 in the OVC).

In what could have been a turnaround for Eastern after the first two losses last weekend and a momentum changer for the season, Belmont shut Eastern down on Friday, winning 2-0.

Eastern’s one shot on goal, out of five total shots, came from freshman forward Pilar Barrio, who has two goals on the season.

Belmont scored in the 30th minute off a Belicia Mendiola header, who tacked on an insurance goal in the 86th minute as well; she is the leading scorer for Belmont with six goals.

Eastern lost 2-0 again on Sunday, this time to Austin Peay. Both of the Governors’ goals came in the second half, the first from Shelby Stewart, her second of the season. The insurance goal for Austin Peay came from Kirstin Robertson with eight minutes left in the match, her team-leading ninth goal on the year.

After the weekend sweep, Eastern’s away record is now 1-4-1. But this weekend, the Panthers host both matches against Eastern Kentucky Friday and Morehead State Sunday.

Eastern has a 4-2 home record, so getting a win this weekend could be crucial for the Panthers’ season ahead.