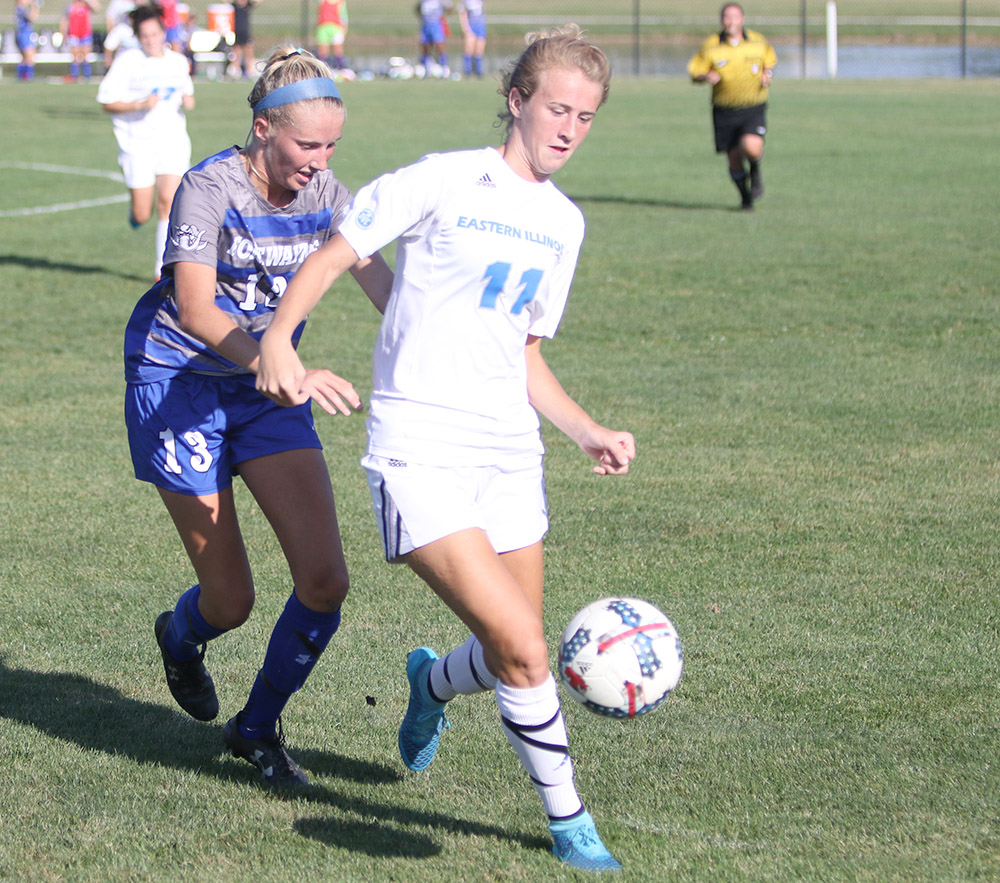 Eastern’s women’s soccer team lost its first conference match of the season to Southern Illinois Edwardsville 3-0, one of two losses in the team’s scoreless weekend. With conference matches on Friday and Sunday, the team is trying to find momentum it recently lost.

Redshirt senior midfielder/forward Emma Scaro said the team finding its momentum again is the biggest thing the Panthers need to do for the rest of the season.

“Every season has ups and downs, and this week we have been focusing on getting the ball speed back up along with confidence,” Scaro said.

Before the winless weekend, the Panthers were on a three-match win streak, scoring 10 goals in that span, that number matching the team’s goal total from last season.

But the Panthers came to an abrupt halt in their momentum with a 1-0 loss to Marian Friday on a penalty kick.

“I think the focus going into Friday’s game was more about how to perform our best Sunday (against Southern Illinois Edwardsville) and we may have overlooked Marian,” Scaro said.

Scaro said that Marian had a lot of numbers to recover on defense, limiting the Panthers’ forward, free movement, something the team had grown used to in previous matches.

Against Southern Illinois Edwardsville, Scaro said the team had some offensive chances, but, she said, one of the team’s key defensive players, senior Carrie Caplin, got injured and the team had trouble finding connections getting forward.

Because there are two conference matches this weekend, Scaro said there is extra motivation to do well.

“We have an opportunity this weekend to gain six points and make a statement in conference,” she said.

A statement in the OVC conference would help the team greatly, as the Panthers are one of the three bottom teams in the conference. The first chance for Eastern to make that statement is Friday against Belmont in Tennessee.

Belmont is 1-1 in OVC play, earning them a top-five spot in the conference, tied with two other teams.

Belmont started its conference season unlike Eastern did, with a 3-2 victory over OVC opponent Austin Peay 3-2 Sunday.

Both the Bruins and Panthers lost to Valparaiso, the only common opponent between the two teams, but Belmont lost 1-0 to Valpo and Eastern lost 3-2 in overtime.

Austin Peay is 0-1-1 in conference play, tying Eastern Kentucky before the loss to Belmont.

The Panthers historically have had the upper hand against Austin Peay, with an 8-5-2 all-time series lead and a 1-0 victory last year at home.

“Although our non-conference matches have gone very well, for many seasons we’ve been underestimated, and we’re still gonna use that as motivation to make a name for our program in the OVC,” Scaro said.

Eastern’s match Friday starts at 4 p.m., and the match Sunday against Austin Peay starts at 1 p.m.

Dillan Schorfheide can be reached at