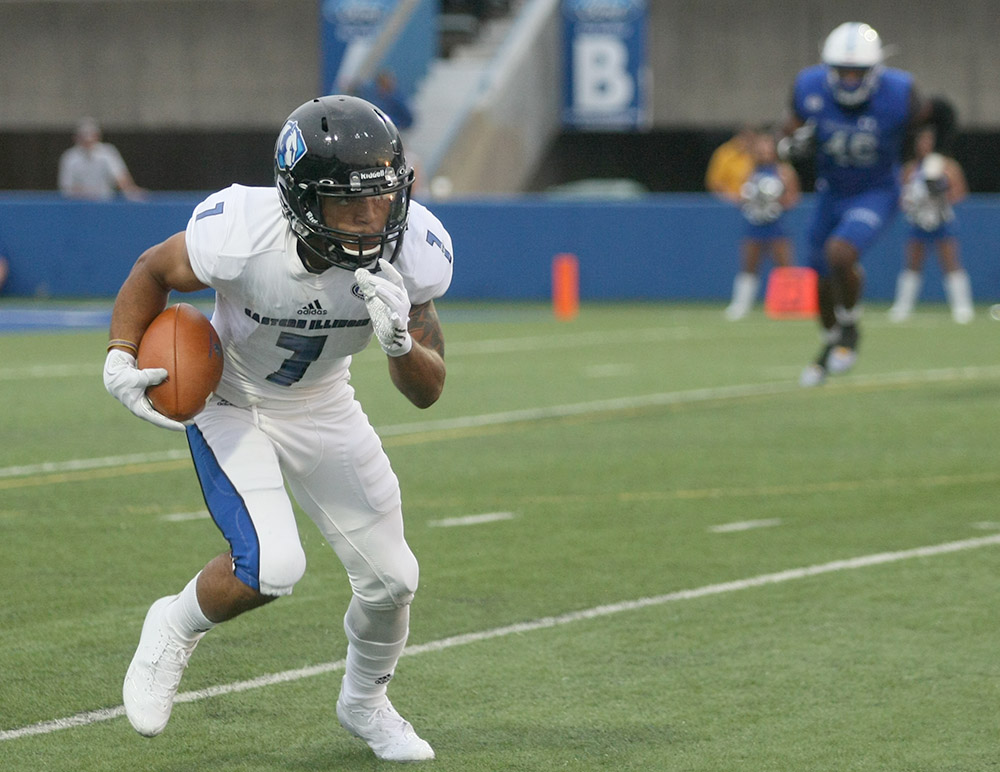 Redshirt junior Aaron Gooch returns a punt in the Panthers’ 22-20 win over Indiana State Aug. 31 in the season opener. Eastern opens up OVC play this weekend at home against Southeast Missouri.

The Eastern football team has had three tough weeks to start its season, but the weeks ahead are becoming more vital to the Panthers’ season.

The previous weeks impact Eastern’s final record in helping it make a run toward the FCS playoffs, but have limited affect on an OVC title. The Panthers missed the playoffs last year.

The Panthers won their next two games of OVC play to keep them in contention, but the game with the Redhawks was one that slipped away that should not have.

Austin Peay won a blowout 69-13, which led to fans storming the field and taking down the goal posts in celebration.

Those two schools got an early start for conference play.

This first week of OVC play is not only vital to the Panthers, but for every team in the OVC. And Jacksonville State, which does not play an OVC game this week, poses one of the toughest tasks for the team playing it.

But in turn, handing a loss to, in recent years, the OVC’s best team, can potentially break the race for the title wide open.

The Gamecocks have run the OVC the past three years, winning the OVC Championship in each. Jacksonville State has put together three-straight undefeated OVC seasons as well—23 straight wins in the OVC.

Jacksonville State is without its star quarterback from last season Eli Jenkins, so now the weight is put on redshirt junior Bryant Horn.

Jenkins was the biggest strength of the offense in 2016 not only throwing for 2107 yards at 11 touchdowns, but leading the team in rushing yards by 266 yards.

It’s a busy week for OVC play with crucial games, with teams besides Eastern looking to make their marks.