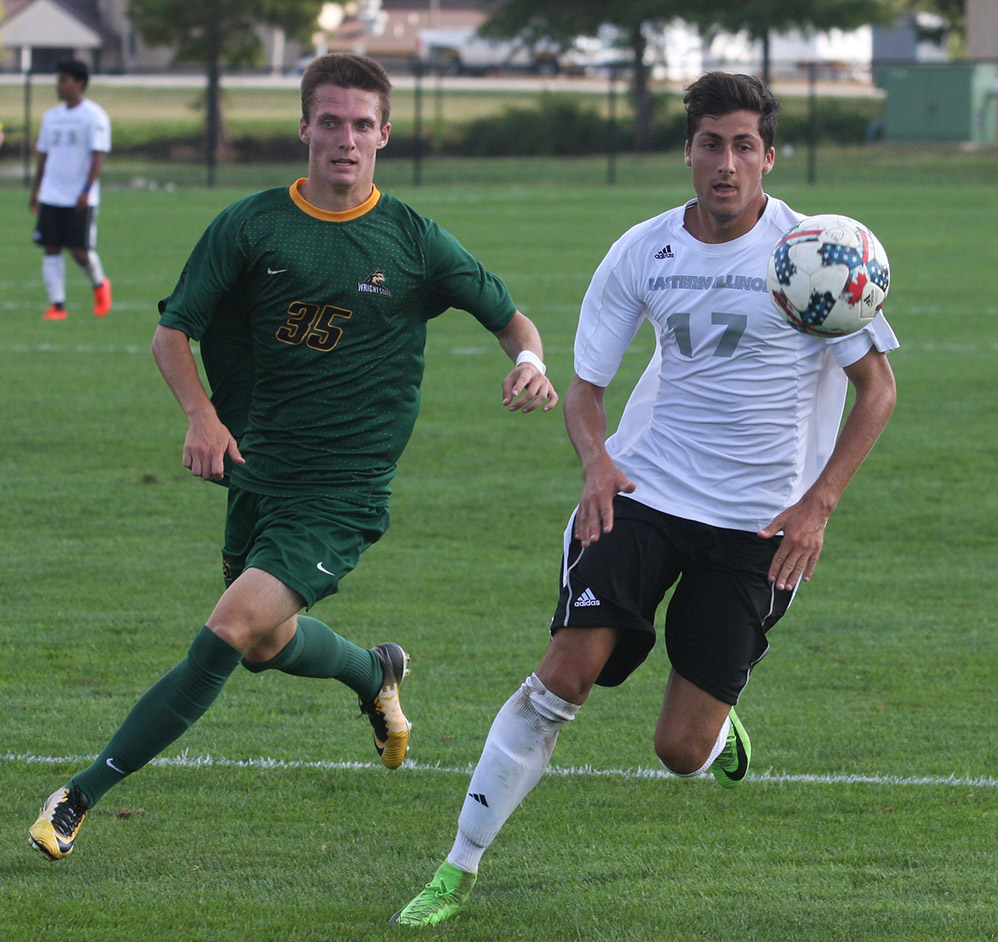 A pair of freshman sprint down the field as Eastern’s Frederico Verlichi pursues a pass as he his chased down by Wright State midfielder Joseph Grimes. Eastern lost the game 2-0 at Lakeside Field.

The Eastern men’s soccer team lost its third game in a row Tuesday at Lakeside Field, as the Wright State Raiders made the most of their four total shots on goal to defeat Eastern 2-0.

For Eastern, the game marks its third game in a row without scoring a goal, however, it is the first game of the losing streak where the Panthers had more shots total and on goal in the game.

Wright State had just eight shots in the game (four on goal) and had its first goal of the game come off a misdirected kick.

In the 45th minute of the game, Wright State midfielder AJ Patterson fired a shot from the middle of the field. As the ball was kicked, Eastern goalkeeper Mike Novotny dove to his right to block it, however, the ball ricocheted off an Eastern player standing in front of the goal and shot into the goal on the left side.

The deflected goal by Patterson broke the game’s 0-0 tie and gave Wright State a lead they would hold for the entirety of the game.

The oddball goal by Patterson is one that Eastern head coach Kiki Lara will use as a learning tool for his young team.

“This team is young and just a bit naïve. We are growing culture, and part of being down a goal or down two goals is the inner-belief that we can still come back and win the game,” Lara said.

Wright State pushed its lead to 2-0 when Raider defender Jacob McGrinder headed in a goal off an assist by Florian Hoffman in the 73rd minute of action.

Eastern had control of the ball for a majority of the second half and also managed to get off seven shots in the half, but none of them were converted to goals.

Lara said, “You saw there in the second half that actually we put a threatening game together and mounted a comeback, and it just didn’t come for us. But that’s part of growing right now, is figuring how to comeback from 1-0 and 2-0.”

The win for Wright State moves their record up to 5-2-1 on the year.

For Eastern, the third loss in a row puts them a game under .500 at 2-3-4. But, as the Panthers get ready to host Omaha in what will be their biggest game of the year to this point, Lara is pleased with how his team has been playing, despite the losses.

“I just said to the guys (after the loss); just a full-on belief that we are playing our better soccer right now. Despite the results, we are playing our better soccer right now than we have been,” Lara said. “So, just understanding the realities of the situation and not focusing much on results and really focus on how good we are doing certain things and cleaning up the little bits of the game to end up playing one of the better teams in the country coming up.”