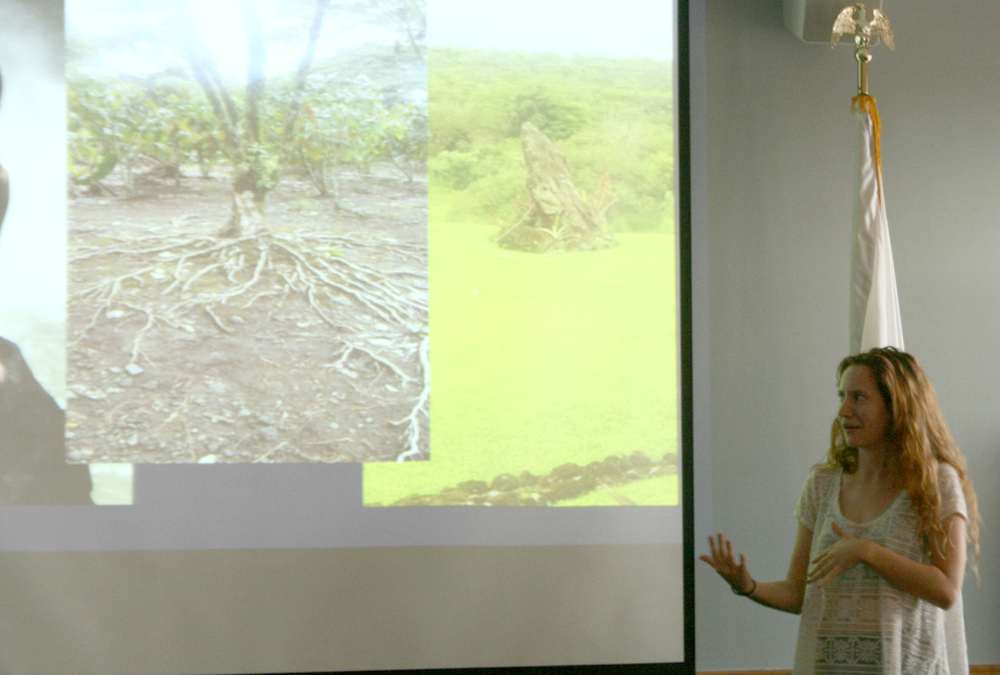 Kennedy Nolen | The Daily Eastern News Alysh Oetzel, a junior foreign language and communication disorders and sciences major, shares her experience of studying abroad in Costa Rica during the summer of 2017. She did a four-week long program with other Eastern students and a separate course on her own, where she enrolled directly into the Universidad Veritas in San Jose.

Five presenters shared their study abroad experiences in a panel called “From the Eyes of Latinos” in the Martin Luther King Jr. University Union as part of Latin Heritage month.

Alysh Oetzel, junior foreign languages and communication disorders and sciences double major, spent four weeks of her summer in Costa Rica and then directly enrolled for a separate course for several extra weeks, which she talked about in the presentation.

She said she had free reign to do whatever she wanted, but also had to prioritize classes.

During the couple weeks-long break between classes, Oetzel had the opportunity to travel to Panama.

“I didn’t really know what was there, but I went anyway and saw some cool stuff,” she said.

She said the course was on the history of Costa Rica, and she enjoyed learning more about the country.

Heather Vaupel, junior foreign languages major, said she came to the panel to hear the stories of the students who have studied abroad, because she is also interested in going abroad.

She said she came to the panel to get information on Guatemala, since she plans to go there during spring break, and she wanted help deciding between Costa Rica and Ecuador for her semester-long trip.

The group of students was taken to several landmarks by Vanesa Landrus, Spanish professor and Latin American studies coordinator, during their first week in Costa Rica.

Stinnett said her group went to Monteverde, a mountainous region of Costa Rica, where they zip-lined and got to meet locals.

The students also went to La Fortuna and saw waterfalls and hot springs. Stinnett described it as an “adult water park.”

Guanacaste was also on the itinerary, as Stinnett had the opportunity to horse back ride along the beach.

“The people I met in Costa Rica were all so welcoming and gracious,” she said.

Stinnett said she found the culture to be very peaceful and family-oriented, and her host mom Lorena still talks with her every now and then.

She said she lived with a host family in their house with another Eastern student and a girl who went to the University of Hawaii.

Summer Lerette, senior foreign languages major, was also a student who studied abroad in Costa Rica for an entire semester.

“A summer trip is awesome, but I would recommend a whole semester,” Lerette said, “I was not ready after four months to come home.”

“I would go to a game there every single day,” she said.

She also had the opportunity to study abroad in Atingua, Guatemala where she visited a coffee plantation, made her own chocolate and toured a volcano.