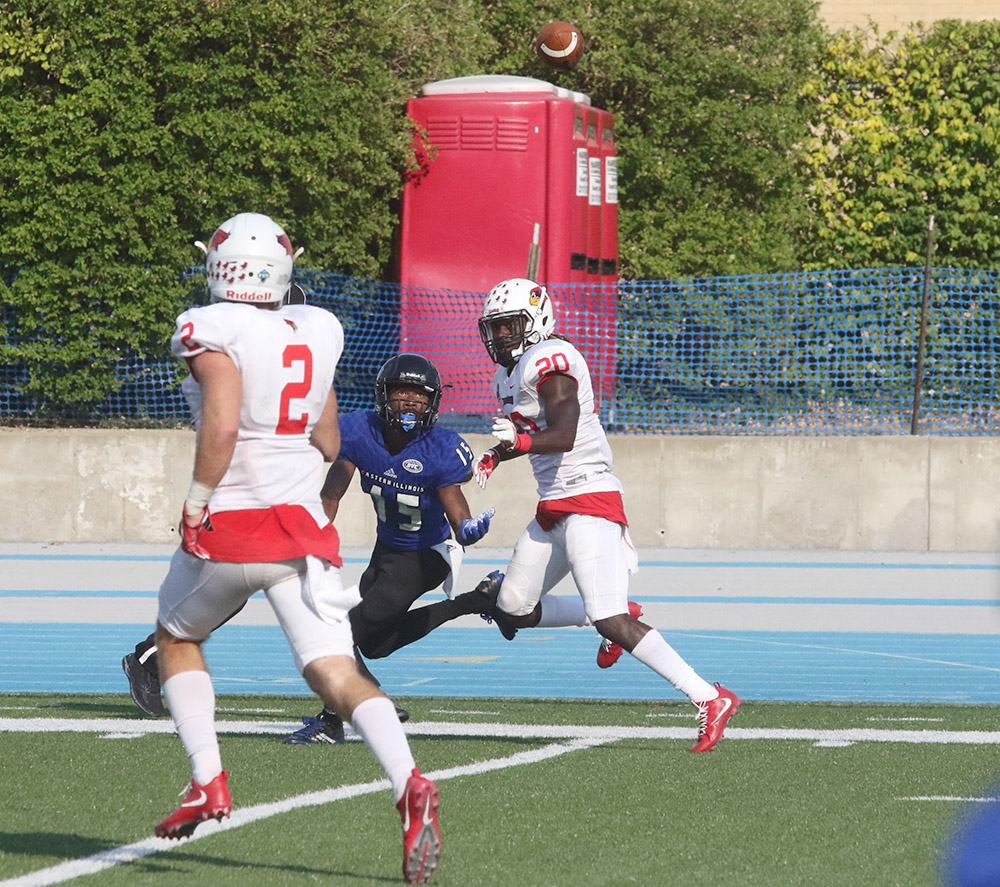 Junior reciever Alexander Hollins eyes down a ball thrown from redshirt freshman quarterback Scotty Gilkey Jr. The ball was just under thrown and Hollins could not hang on to the ball.

It was the third quarter against Illinois State, and Scotty Gilkey lofted a ball nearly 50 yards down field into the end zone and the receiver just could not come up with it.

There is no reason to expect receivers to come down with every ball, but that was a turning point as the score would have brought Eastern within just one touchdown.

Of course, there was other reasons the Panthers lost Saturday afternoon, but it is no secret that they have struggled offensively in its first three games of the season.

A pretty large part of their struggles has come from the wide receiver position.

There is a difference between not having the talent and not having the production, and it is still early enough in the season to say that it is the latter.

The Panthers have just two receiving touchdowns in the last three games, and that could also be a factor why they are ranked second to last in the Ohio Valley Conference in scoring offense.

Eastern ranks last in pass efficiency after completing 54 percent of their passes for just 432 yards and one touchdown.

It is not always bad to not be best in pass efficiency, but in Eastern’s case they rank second to last in rushing offense too with an average of just 50 yards per game.

It is not to say one part of the offense is more to blame, and coach Kim Dameron stressed that following Saturday’s loss.

He said every part of the team needs work, but it is obvious that a smooth balanced offense would go a long way.

Alexander Hollins has done his best to make that happen, leading Eastern in receiving with 12 catches for 111 yards and an average of 37 yards per game.

There is no question that missing Addison Bounds at tight end in this offense is a big deal as he was a favorite for quarterback Mitch Kimble a year ago.

Now Kimble cannot click with any receivers as drops are killing the offense just as minimal time in the pocket does.

Against the Redbirds, Kimble was brought to the ground nearly every drive and Eastern’s rank for time of possession signifies that.

The Panthers have struggled to put any drives together, averaging just 29 minutes on offense per game while the top ranked team averages about 35 minutes per game.

Now is the time for Eastern to fix all of this though as its opponent this week, Southeast Missouri, ranks seventh out of nine teams in passing defense.

The Redhawks will counter the run game often as they rank in the upper half of the conference in run defense, so Eastern may have to rely on the passing game heavily.