Cadets try their hand at rappelling 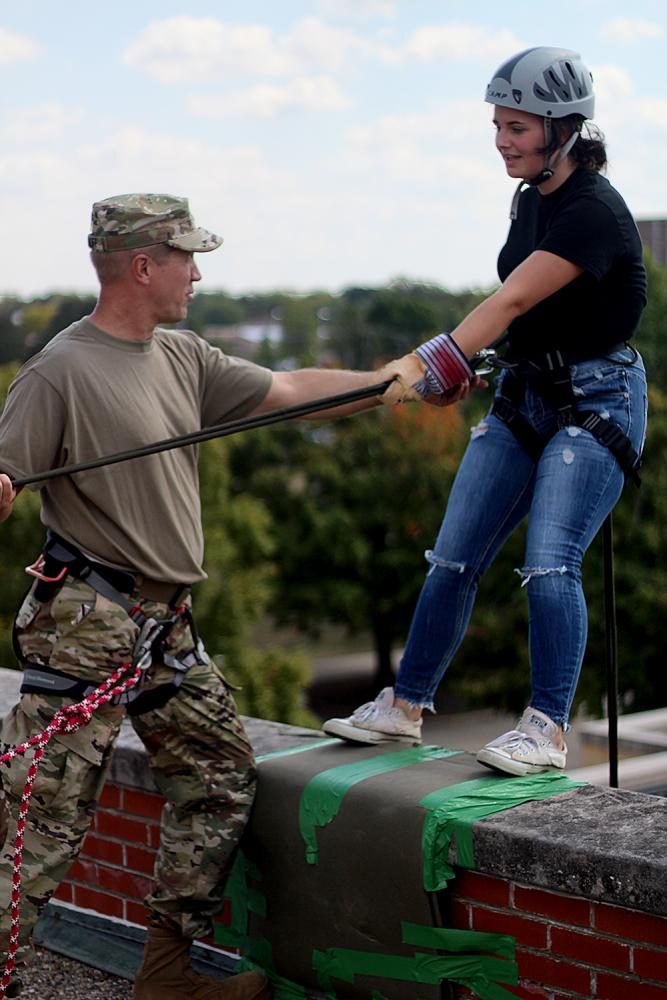 Major Roy Waldhoff,a rappel master, encourages Ruth McMullen, a freshman JROTC student from Richland County High School, who was afraid to rappel off the side of Klehm Hall Friday afternoon during the ROTC rappelling training event. "I felt like I couldn't do it and I was nervous," MCMullen said. "But when everyone was clapping for me, I felt like I could do it." After some coaxing and words of encouragement, McMullen rappelled her way down to the mat below. She said it was her first time doing so and her first time at Eastern.

Emotions and suspense lingered on the side of Klehm Hall Friday as students and ROTC cadets fastened their ropes and tightened their helmets as they headed to the top of the building for the annual rappelling lab.

All the cadets in the ROTC program have to rappel, however Shamus Shields, a fourth- year cadet, said they also do it to interact with the eastern community.

“It’s not so much a recruiting event, but it is a way to meet people and interact with them,” Shields said.

As his fourth and final year helping out with the lab comes and goes, Shields said he is a little upset that he will not be able to do this with the program again.

“I love being here with ROTC at Eastern but I’m on to different things. I mean I’ll be in the army and I’ll be doing cool stuff with them as well,” he said.

However, as far as rappelling goes, Shields said he was not nor was he ever nervous or scared because of the trained professionals that ensure the safety of cadets and students who swallow their fear and rappel.

“These guys are trained professionals here and it’s not like you’re dealing with somebody who doesn’t know what they’re doing,” he said. “I have full confidence in them.”

He said the ropes are constantly checked regardless of how functional they were after the first use and there are several people who check each participant before they actually stand on the ledge and take the leap off.

But despite the added safety, Shields said some people still get a little nervous.

“But the cool thing is once they get down to the end they’re all pretty excited and all ‘hey I just did something pretty neat, how often do I get to rappel off a building,’” he said.

Ashunty Pointe, a first-year cadet, wore a gray helmet with ropes tied around her waist as she practiced rappelling off a smaller wall before she took on the side of the building.

Pointe said it was not her first time rappelling since her dad was in the Navy and took her before.

But unlike a few people that went before her who hesitated and second-guessed themselves, Pointe said she was not nervous or afraid of heights but rather she was full of excitement.

Once it was her turn, Pointe leaped off the edge and jumped off the wall a few times, sending herself flying in the air and quickly making her way back down to ground level.

“You get an adrenaline rush,” Pointe said. “Then you’re ready to go.”

If there is one piece of advice he can leave for those interested in rappelling next year, it is to have some trust in the equipment and the people holding the ropes.

Tim Steiner, another fourth-year cadet, said though the lab is fun and he will miss it, he has done better things during his time in ROTC and this semester has been stressful, aside from the rappelling lab.

Steiner said communication is the number one thing in the program, especially when it comes to rappelling.