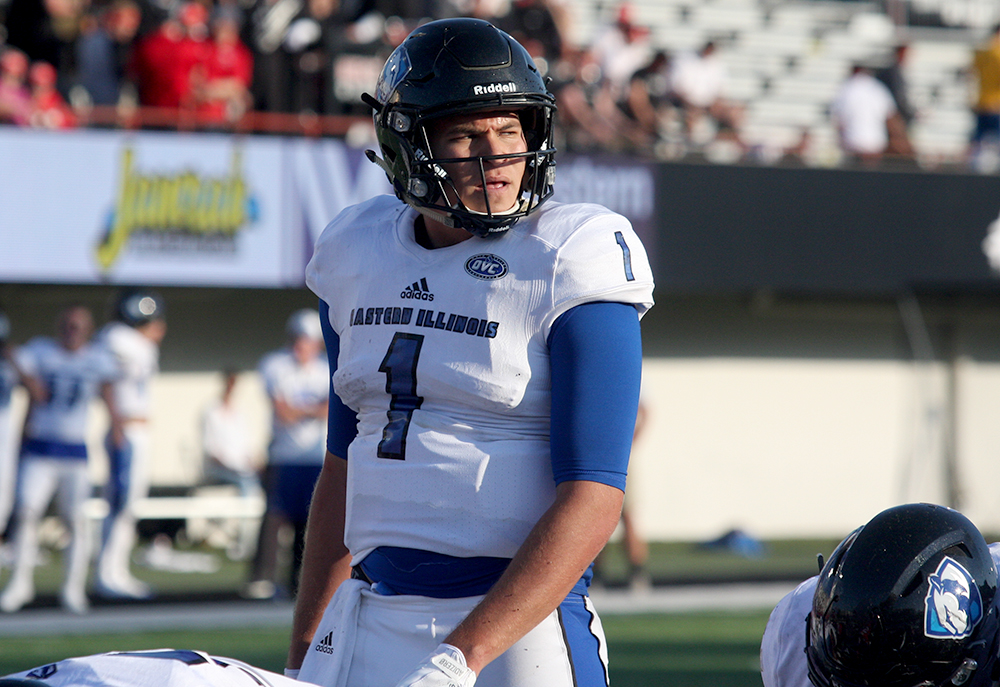 There is one thing that Scotty Gilkey Jr. knows better than anything.

Growing up, everything he knew was Eastern. To be more specific: Eastern football.

Quarterback Gilkey Jr. may have only signed to play football at Eastern two years ago, as the 20-year old is in his redshirt freshman season, but his heart committed to Eastern football 15 years ago.

The years 2000 and 2001 in particular opened his eyes to the world of college football. He got the chance that most kids do not get; he watched his dad play for the Panthers, Scotty Gilkey Sr.

Gilkey Sr. was a tight end during the 2000-2001 season and as a little Charleston kid, Gilkey Jr. remembers those times vividly even though it was before he entered the second grade. The Gilkey family has since moved to Oklahoma.

O’Brien Field did not always have artificial turf that it does now. It was all grass.

“It’s crazy (what’s changed),” Gilkey Jr. said. “I remember the grass field and coming out for a game one day and it was pouring down rain and going home soaking wet. I remember all the mud my dad had on him. It’s little stuff like that.”

Gilkey Jr. would wait in the stands just above the Panthers’ locker room and wave to his dad and get a wave back.

Now the two have switched positions. This time it’s Gilkey Jr. running off the field with his dad in the stands.

Although Gilkey Sr. was a former Panther and leader of the football team, there was no pressure from him, or his mom, who also attended Eastern, to come here.

Gilkey Jr. said he had talked about playing at Eastern since he was little.

“My dad couldn’t careless if I really came here or not,” Gilkey Jr. said. “Of course deep down he wanted me to come, but it was pretty cool because I grew up in the area sitting in the stands and watching him play so it feels pretty good to be here.”

Gilkey Sr. also said there was no pressure, but the memories the two shared years ago played into his decision and shows that the they did something right building the culture at Eastern.

But the fact that Gilkey Jr. decided to follow in his father’s footsteps and play for the same school, where the same colors, a don a Panther logo means a lot to Gilkey Sr.

But he was not the first to find out that he was going to be a Panther. Eastern coach Kim Dameron was.

“(My dad) was really excited,” Gilkey Jr. said. “He was like ‘wait, what?’ I wanted it to be a surprise to him. It’s something special. Not everyone gets to come do this and I’m really blessed to have the opportunity to come do this. It was really special for the rest of my family as well.”

There is nothing like a father-son relationship, especially when it comes to sports. Most sons remember that first catch with their dad, first sport games, but the Gilkey’s got just a little bit more out of that.

“I think it meant a lot (to play in front of my son),” Gilkey Sr. said. “I didn’t have a father growing up and to me it is important to be a good father and to give what I didn’t have.”

Gilkey Sr. only had his mom growing up and said she did a great job raising him.

“There’s a difference when you have a father, and of course what dad doesn’t their kid to look up to them,” Gilkey Sr. said.

Gilkey Sr. got a later start to college football, playing his Eastern ball as a 24 and 25-year old.

He played high school football, had offers, but his next four years were going to spent somewhere else.

“Being a Marine was my thing,” Gilkey Sr. said. ”I wanted to be a Marine and went to the Marine Corp.”

Gilkey Sr. played football while he was in the Marines, playing on base teams. He decided when he left the Marines that he wanted to go to college.

He played football at one of the top junior colleges in the nation, Northeastern Oklahoma (NEO).

“It was the relationship I built with Wittke and Spoo which led me to Eastern,” Gilkey Sr. said.

Gilkey Sr. caught two touchdown passes in each of his two seasons with the Panthers from former Dallas Cowboy Tony Romo. And the two are still friends today.

Gilkey Sr. is friends with a lot of his old teammates to this day.

And he had his son along with him for the whole ride.

At around 5 years old, Gilkey Jr.’s friends were his dad’s teammates.

For a kid, a hotel is not the same if there is no pool there. And on road trips at the hotel, that’s where you could find Gilkey Jr.

“I remember going on all the trips to road games and (Gilkey Jr.) would come to the hotel and he’d go swimming,” Gilkey Sr. said. “I’d have players over at my apartment and them being with my son and my daughter. We were a family. We were all tight.”

Gilkey Jr. was shaped early, not only as a football player, but as a Panther.

Gilkey is the back up quarterback for the Panthers now and scored his first touchdown last week at Northern. His dad missed the game, one of the first he has missed in a while, Gilkey Jr. said.

First snaps, first touchdown, but it was not anything knew for the redshirt freshman.

“He learns everyday and not just from the coaches, he learns from (senior quarterback) Mitch (Kimble), so in turn Mitch is going to make him a better player and that’s the thing that makes me proud,” Gilkey Sr. said. “He goes in, he’s not nervous, he’s not rattled.”

Gilkey Sr. asked if he was nervous after the game. Gilkey Jr. replied simply with ‘No, I don’t have time to be nervous. I’ve played this forever. When they ask me to do something, I’m able to go and execute.’

Eastern blue runs deep and even deeper the Gilkey Jr. Just like him, his siblings are eying down the Panthers.

“I talked about it since I was little,” Gilkey Jr. said. “Same as my little brothers as of right now. They went to an Oklahoma State camp and they didn’t’ want to put on a jersey because they have it in mind they’re gong to play for Eastern already.”

For the next four years, including this year, Gilkey Jr. will be wearing the Eastern blue and Gilkey Sr. hopes he cherishes every moment.

Gilkey Sr. played for two years in front of his son, coached him, but there is one thing that he wants in particular for Gilkey Jr.

“Number one, you want to be a good person and work hard with everything you do and understand that nothing is given,” Gilkey Sr. “Don’t’ take anything for granted, keep god first and everything else. If you do it right, it will work out.”

Gilkey Jr. and the Panthers take on Illinois State Saturday at O’Brien Field for Family Weekend. And whether or not he gets on the field, Gilkey Sr. will be in the same stands he played in front of his son in 15 years ago.