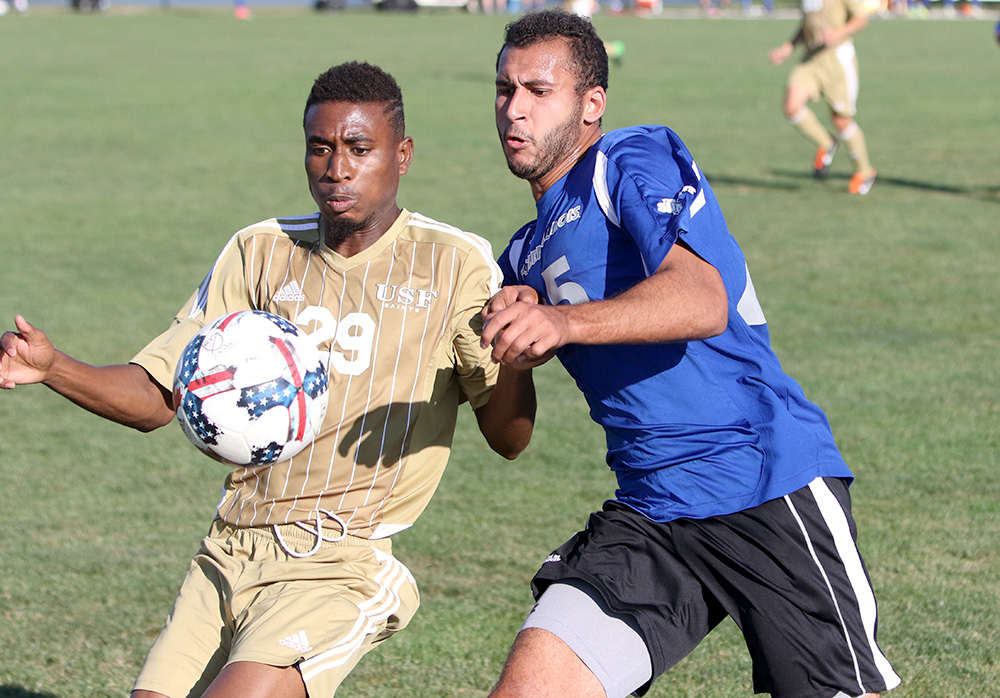 Freshman Shady Omar battles for the ball with a Saint Francis player in the Panthers’ 1-0 win at Lakeside Field. They play Evansville on the road Sunday.

The Eastern men’s soccer team continues its mini two-game road trip, but this time a little closer to home.

The Panthers have a three-day layoff before returning to the field when they head to Evansville, Indiana to take on the Evansville Purple Aces on Sunday afternoon.

Eastern has yet to find much consistency on offense so far this year, as the offense has only produced four goals in seven matches this season.

Senior goalkeeper Mike Novotny has held his own through seven matches to this point, allowing only five goals this season, saving 53 shots and recording four shutouts.

Novotny’s strong play in goal has earned him national recognition as well. His 53 saves lead the nation. He is also the national leader in saves per game with 7.57 as well as minutes played with 710.

With the offense struggling to put the ball in the back of the net, Eastern has only had 43 shots, while their opponents have had 125. The Panthers have landed 14 shots on goal and have allowed 58 on goal.

With only allowing five goals this year, the first period is a tough one for the Panthers as four of those five goals allowed come in the first.

In the loss to Marshall Wednesday night, the perfect season came to an end for Eastern, as they were dealt their first loss of the season.

After tying one and winning one game at Lakeside Field last week, the Panthers were shut out by Marshall 3-0.

Evansville is struggling a little bit as of late, as they ride a two-game losing streak. The Purple Aces have a 4-2 overall record, and perform well at home, still undefeated at 3-0.

The Purple Aces are a good offensive team, scoring 16 goals on home turf compared to just one on the road.

Sophomore Johnny Huerta leads Eastern with nine shots but knows the team has to keep moving forward to fix their weakness.

“It’s a tough loss for us but the mentality we have stays the same going forward,” Huerta said. “We have games coming up that we have to focus on so we have to learn from our mistakes this game and try to fix as the season goes on.”

The Panthers and the Purple Aces play Sunday at 2 p.m.