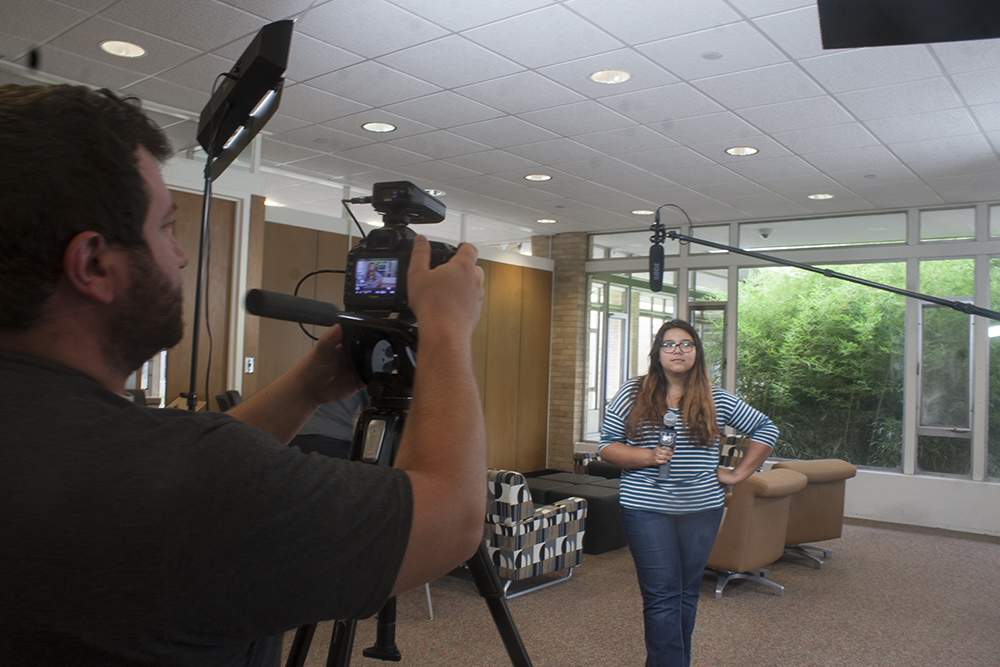 Brent Mann, a videographer for MTVU, tapes Jessica Stewart, a freshman music education major, as she auditions to be a video jockey for MTVU. Students will have another chance to audition from 11 a.m. to 3 p.m. on Oct. 3 in Taylor Hall. MTVU will announce the newest video jockey by Oct. 31.

Scouts from the MTVU were on campus from 11 a.m. to 3 p.m. with lights and a camera as they looked for the action.

According to MTVU’s site, “(the station) covers aspects of college life with a range of shows profiling college students, activism and emerging new music.”

The video jockey’s task will be to introduce songs and to represent their university on the network.

Tiffany Heyton from MTVU said the network has people who scout college students all around the country.

“We are looking for a personality that shines,” said Heyton.

Jessica Stewart, freshman music education major, said she saw the auditions to become a video jockey were happening and decided to participate.

“I am easy-going, and it would be fun to introduce songs,” she said.

Heyton said the team of recruiters from MTVU chooses different universities in several regions of each state to hold yearly auditions.

Stewart said she loves music and thinks it would be a great opportunity.

After auditioning, Stewart said she thinks she did a pretty good job.

Students from around the country who audition in September might have a clip of their audition featured on MTVU until the next round of auditions in October, Heyton said.

Students who missed the opportunity to audition will also have another chance from 11 a.m. to 3 p.m. on Oct. 3 in Taylor Hall.

Heyton said the process of filling out paperwork and saying lines on camera takes about 10 minutes to complete.

MTVU will announce the newest video jockey by Oct. 31, and the winner will work with the network on up to three paid projects.