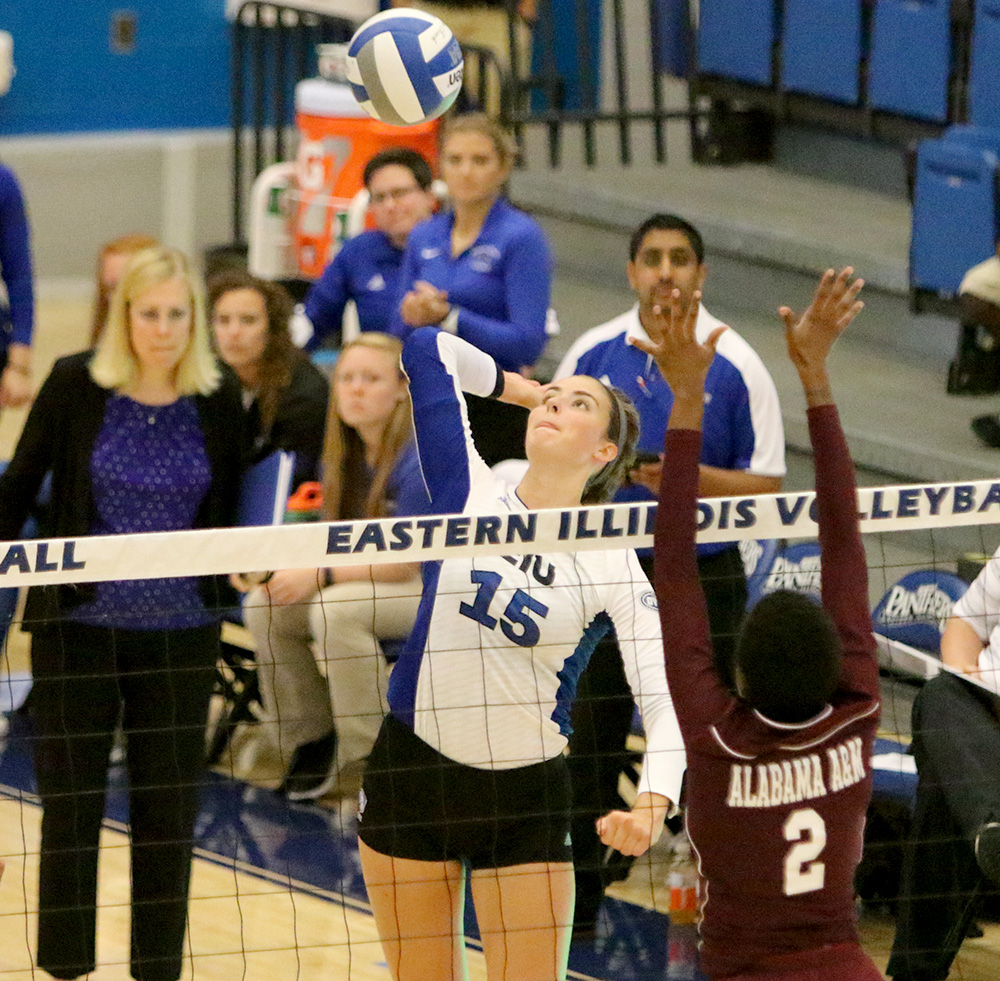 Laurel Bailey goes up for a kill against Alabama A&M on Friday at Lantz Arena. The Panthers won the match 3-0.

The Eastern volleyball team dominated to start the EIU Panther Classic with a quick sweep of Alabama A&M, but dropped the next two matches of the weekend to Chicago State and Western Illinois.

Coach Sam Wolinski wanted the Panthers to stay strong on defense going into the weekend, and the Panthers did just that. They allowed just 21 points through the first two sets. Eastern closed those sets out 25-9 and 25-12.

Alabama A&M put up a much a better fight in the third set, losing just 29-27.

Anytime Eastern went up for an attack, especially in the first set, it was almost a guaranteed point. Senior Maria Brown and freshman Laurel Bailey had 14 and 10 kills, respectively.

With the success Eastern had on the kills, it allowed them to attack in different ways.

“It’s stuff we’ve been working on in practice, when to terminate for a kill and when to place for a kill,” Wolinski said. “So out hitters are seeing what’s available with their shots.”

Another key to Eastern’s success was the Panthers’ serving. The Panthers had seven aces, and when it was not an ace, it kept Alabama A&M off-balance.

“If they can’t run their middles, it’s just easier to know who they are going to go,” Wolinski said.

That plan did not work for Eastern on Saturday, though.

The Panthers were unable to shut the door on Chicago State; after the Cougars won the first set easily 25-14, Eastern came right back and took the next two sets 25-18 and 25-17, respectively. However, it was in the fourth set where things got interesting.

Up two sets to one, Eastern had multiple opportunities in the fourth set to win the match. The Panthers went up early in the set 7-3, but the Cougars would go on a run of their own and eventually tie the score again at 16-16.

The two teams would exchange point with each other until eventually the score was tied at 25-25 and extra points would be required for someone to win the match.

Eventually, Chicago State would take the two-point lead require to win the match and win the fourth set 30-28.

In the fifth and final set, Chicago State went on a run after having the score tied a nine, to win the set and match 15-11 over Eastern.

Wolinski said Chicago State’s switch to off-speed shots at the end of the fourth set was the difference maker in that crucial exchange of points.

“They made the adjustment going into the fifth set and we were able to pick those up. So that didn’t hurt us as much,” Wolinski said. “The big difference in that fifth set was that we didn’t take care of the serving aspect, which we had been taking care of most of the match. But when you miss three to four point serves in a fifth set there is just not enough time where we needed to point score and we weren’t able to do that well enough.”

Unfortunately for the Panthers, a stat sheet does not equal a victory as the Panthers had more kills 67 to 57 over the Cougars, had 13 blocks to their 7 and also had a higher attack percentage, .233 to .169.

“Statistically if you look at everything, we pretty much won every statistical category minus if you look at the service errors and stuff,” Wolinski said. “I don’t think we were into our rhythm on that first set and then we fixed that and got into it. So that was good to see from us.”

In their second match on Saturday, Eastern was swept by Western Illinois in three sets.

Eastern did not play particularly clean in this game, beating themselves with errors.