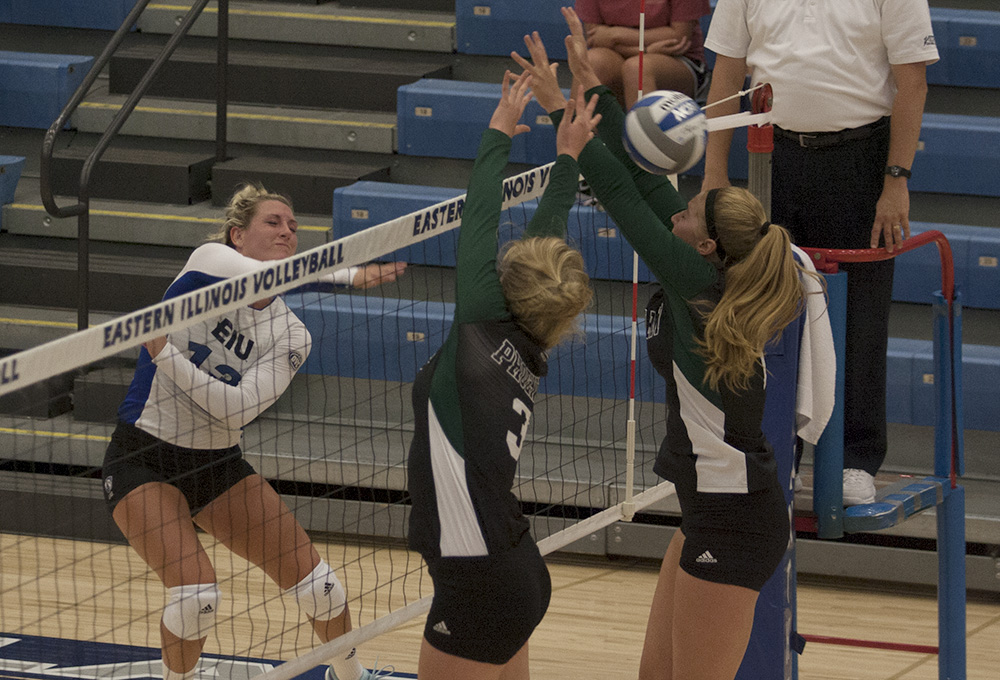 Senior Maria Brown kills the ball in the Panthers’ loss to Green Bay Aug. 25 in Lantz Arena. The Panthers host the EIU Panther Classic this weekend.

After a 1-2 weekend at the Denver Tournament, the Eastern volleyball team is back home for three matches set for Friday and Saturday.

The Panthers are set to play Alabama A&M Friday at noon, with matches against Chicago State and Western at 1 and 7 p.m.

Eastern kept all its matches close last weekend, win or lose, but the loss to Niagara to open play stood out to coach Sam Wolinski.

“(We) did not play our best match against Niagara whatsoever,” Wolinski said. “But that says a lot about the team that we executed the game plan (in the second match) against UC Davis, which was a very good team that was ranked last week in the mid-major polls.”

Eastern won in three sets, and one of the reasons for the improvement early on was the addition of the freshmen.

Wolinski said it has added depth to the team.

“It’s built a competitive culture in our gym, which is exactly what we are looking for, so there’s an excitement everyday that we’re at practice and getting better,” Wolinski.

One freshman that has stepped up in her first year is Laurel Bailey. Bailey has recorded 48 kills this season, which is third best on the team. Senior Maria Brown and junior Taylor Smith have 52 and 51 kills, respectively.

Bailey has been in her role as an outside hitter since the start of the season.

Last weekend, Bailey took control of the game and served the final four points of the game to win the third set against UC Davis. Wolinski called a timeout prior to the four-point swing trailing 24-22.

“She plays out there with a lot of confidence and finds a way to get it done and takes feedback really well in terms of what she needs to work on and make herself 1 percent better,” Wolinski said.

Not all the freshmen on the team have had game action, but they are still playing a key role for the Panthers with what they bring to practice.

This weekend’s teams will pose some things that Niagara showed against the Panthers.

Off-speed shots, tips and rolls are three things that the Panthers will have to be ready for this weekend, Wolinski said.

Eastern has been a good blocking team in its first six matches this year, and doing that and sticking to its game plan and its style of play will help them get wins at home this weekend.

“We have to continue to let our block be our strength,” Wolinski said, “whether we end the rally with the point or we get a great touch that allows us to earn a point.”

Sean Hastings can be reached at581-2812 or [email protected]